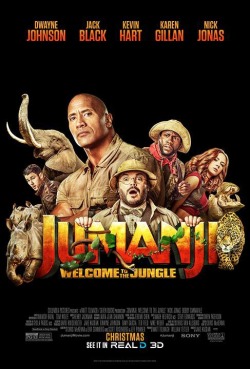 The premise of the first Jumanji was pretty simple: A man who’s been trapped in a board game for 26 years finally breaks loose and the kids who freed him have to stop the animals and other dangers that came out with him. 27 years later the movie is finally getting a sequel in Jumanji: Welcome to the Jungle.

The film follows four disparate teenagers who are all sentenced to detention one afternoon. Forced to clean out the high school storage room the discover an old video game system that still works and decide to play “Jumanji” to pass the time. They wind up being sucked into the game, taking on the physical forms of different characters. Now appearing as grown adults (played by Dwayne Johnson, Karen Gillan, Kevin Hart and Jack Black), they have to find their way out while also saving Alex, a man who was trapped in the game back in 1996.

The first poster establishes the setting and the danger by showing four characters seen only from afar as they fall down a massive ravine in the middle of a jungle, a huge statue/temple in the background.

That same temple is seen in the background of the next two posters, which assemble the cast in front of the camera as various huge animals and the occasional helicopter walk or fly through the jungle behind them. 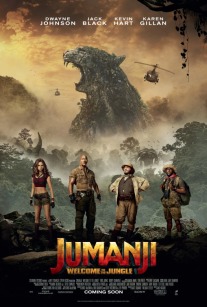 The next poster shows the tops of the faces of the cast as they peek out from the water of a lake. That’s enough to set the scene, but then there’s the addition of an alligator (or crocodile…I’m not sure) that’s next to Hart and also looking at the camera.

A series of character posters showed each one in a different location within the jungle, either exploring or on the run from some sort of danger. 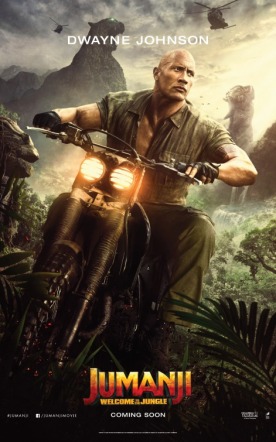 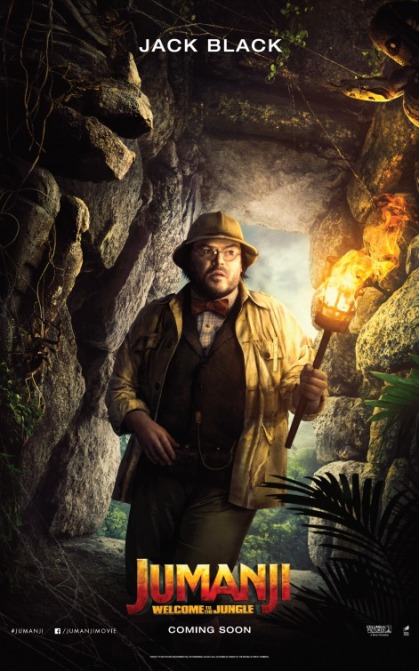 Another set just had everyone in extreme closeup. 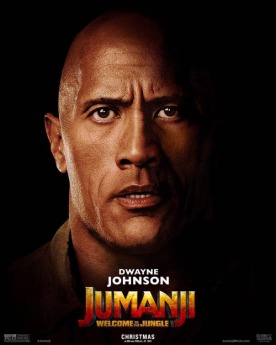 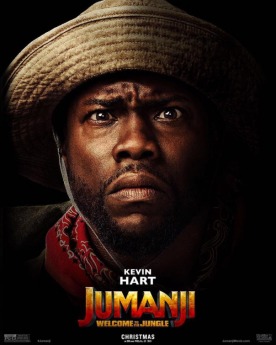 What appeared to be the final theatrical poster arranged all the characters as well as numerous animals, around the title treatment and against a plain black background. For a movie being sold as fun and action-packed, this is pretty uninspiring and kind of boring. Johnson of course dominates while the rest of the cast is presented in order of how influential their agent is.

If you liked the premise behind why a group of misfit teens was put together in Power Rangers you’ll love how the first trailer for Jumanji starts out. The four main characters are put in detention together because reasons and they soon find themselves sucked into the world of the classic video game they find in a dusty basement. They begin to realize they’ve actually *become* those characters, which includes some massive physical changes as well as a bit of gender-switching, which leads to some comedy. The adventures begin as they need to outrun wild animals, navigate ancient temples and so on.

OK sure, why not. It looks amusing enough but, as I stated earlier, doesn’t really address a whole lot. It’s just there for the laughs, which is fine. There’s no mention of or allusion to the previous movie here, just the idea that things have been upgraded from “old board game” to “old video game.”

The second full trailer starts out with a nod to the original movie and seems to imply that the game knowingly evolves from the simple board game to a video game to better lure kids in. After the quartet gets pulled into the world they begin exploring what their new bodies are capable of.

There’s no real story here but there is a lot more of the adventure element that’s on display. Humor is still plentiful, of course, but we get quite a bit of the CGI animals that chase our heroes and the perils they face, along with their reactions to those situations.

There’s a nice “The game is loading” progress bar as the official website opens to keep up the video game-centric nature of the story. A pop-up encouraging you to buy tickets can be closed, at which point you’re greeted with a version of the key art showing the stars nose-deep in water.

Scroll down the page, past the prompt to enter a sweeps awarding tickets to Hawaii, and the first thing you see is a brief plot synopsis in the “About” section. That’s followed by “Cast & Crew” lists and then a “Meet the Avatars” featuring offering vital stats on the characters of the video game.

Moving back to the top of the page, all that content is listed in the main content menu as well, though in a different order. The first unique offering is “Jumanji Tree House 360,” where you look around the treehouse Alex hides in to find hidden items. After that is the “Rhino Run” casual game that lets you run through the environment and collect gems.

“Videos” just seems to have the one trailer where there are a series of production stills in the “Gallery.” Finally, off to the side there are links to the movie’s Facebook, Twitter and Instagram profiles.

If you used #Jumanji on Twitter you unlocked a branded avatar of an elephant.

Sony partnered with VRX Networks to bring a VR experience to theaters across the nation that allowed people to enter the jungle and discover the secrets of Jumanji on their own. It also worked with Oculus on a virtual reality experience for the movie that not only worked with headsets but also became the first VR execution to be viewable within Facebook’s primary web-based News Feed. The game had players exploring exotic locations looking for hidden treasure and other prizes that unlocked clips from the movie and other exclusive content.

There was a special screening set up for Amazon Prime members at select theaters across the country. It’s similar to how certain credit card members can sometimes buy concert tickets before the rest of the public. Prime members could register for those screenings, which then offered them various swag from both the movie and Amazon/Whole Foods. That seems to have worked out well since it was reported those early screenings grossed almost $2 million, likely possible only because it happened before The Last Jedi was drawing everyone’s theatrical attention.

Rightly or wrongly, much of the early buzz, conversation and speculation was centered around the first look photo of the main characters that was released, specifically Gillan’s wardrobe, which is much more revealing and less practical than that of her male costars. Eventually a rationale for that disparity was provided, but it failed to satisfy many.

Later on Black was interviewed in EW’s fall movie preview about how he got in character to play a teenage girl trapped in a grown man’s body.

A featurette that was widely covered allowed the cast and crew to talk about the story and their characters and how this movie ties into and builds off the original.

Johnson was featured on the cover of a holiday issue of Entertainment Weekly just a couple weeks before the movie came out. Oddly, though, many of the stories that were part of that cover feature didn’t talk about Jumanji, though, instead focused on his upcoming Jungle Cruise and the future of the Fast/Furious franchise.

More profiles of Johnson followed, often including comments from the rest of the cast.

Hart was busy the week leading up to release, with appearances on “Saturday Night Live and “The Tonight Show” to promote the film and basically get i some hijinks. Black and Jonas debuted a ridiculous movie-themed song and video that played like an epic 80s track. Meanwhile Gillan was doing her own thing, including continuing to answer questions about her wardrobe and other facets of production. Black also made his own talk show appearances to be his usual outrageous self.

The movie is being sold only slightly, based on my reading of the campaign, on nostalgia. There’s certainly nods in the direction of the beloved original in the formal marketing and the cast mentioned it on occasion, talking about the connective story tissue between the two films. But there’s a real desire, it seems to me, to present it as its own thing, not tied down to what’s come before. To some extent that makes sense as campaigns in the last few years that have gone all-in on being loose remakes of a 20-year-old first film.

Instead Sony relied on the charm of the four leads to carry the weight. There’s humor that’s mined from most of the characters being in gender-swapped bodies, particularly when we see the massive Johnson try not to panic and cry and the schlubby Black realize he’s a middle-aged man. Other than that it’s being sold as a fairly conventional action adventure movie aimed at families looking for a bit of a break over the holidays. It’s not the best thing, but it’s not bad.

There’s an escape room in Los Angeles based on the movie that takes you inside a video game brought to life and requires teamwork to solve.

The home video packaging features Snapcodes that unlock World Lenses taking you inside the action.
The VR adventure based on the movie is coming to virtual reality arcades around the world, allowing players to immerse themselves in a story where they guide and help characters from the film.

One thought on “Jumanji: Welcome to the Jungle – Marketing Recap”