News broke last week that “The Kitchen” is being adapted for the big screen by writer Andrea Berloff, who will also direct the movie. Tiffany Haddish and Melissa McCarthy are attached to star.

“The Kitchen” was a 2015 eight-issue series from DC Entertainment’s Vertigo imprint from writer Ollie Masters and artist Ming Doyle about three women in the Hell’s Kitchen of 1970 who, with their husbands in prison, find the only way to survive is to take over the criminal enterprises those men previously ran.

The book was part of Vertigo’s substantial “Defy” campaign that kicked off in 2014 (it was announced in 2013) with a wave of new books and a paid ad campaign that sought to push the imprint in bold new directions. It was also very much meant to show there was life in the banner after editor-in-chief Karen Berger, who had essentially launched it back 20 years prior, left.

This is hardly the first Vertigo title to be adapted for other media. “iZombie” is about to kick off its fourth season on TV and “Lucifer” is in the middle of its third season. “Constantine” only lasted one season on TV, though Matt Ryan was such a fan-favorite he’s shown up on other CW super hero shows from time to time. “Preacher” was adapted by Seth Rogen and has already enjoyed two seasons. Movies include Constantine (not connected to the show), Swamp Thing, The Losers and more. And a “Sandman” adaptation has been in and out of production for several years.

As I’ve stated before, I used to work with DC Entertainment from 2011 to 2015 and was front row for the “Defy” campaign and other Vertigo-related initiatives. One of the biggest perks of that position is that I read a butt-load of comics, including a number of Vertigo titles. So, putting aside no-brainers like “American Vampire” and classics like “Fables,” here are five series I want to see turned into movies.

Writer Dan Abnett imagined a Victorian England where society is divided into two classes: At the upper end are those who have become vampires while the lower classes consist of zombies, resulting from a plague that has spread across the world, and a few surviving humans. Class relations are the central focus of the story, which revolves around Chief Inspector George Suttle’s investigation of a murder.

Abnett, with the help of artist I.N.J. Culbard, told a compelling story that touched on many of the social issues of the turn of the last century, including women’s suffrage and more. Given the focus on zombies and other supernatural stories, it’s easy to see how this could be a very interesting story when the eight-issue series is compressed into a two-hour film 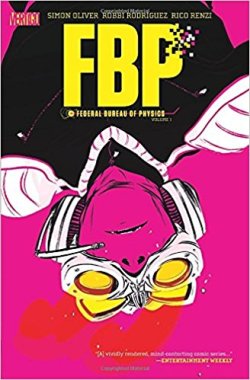 What if physics just kind of stopped working as expected? That’s the premise of this series from writer Simon Oliver and artist Robbi Rodriguez. It follows Adam Hardy, a strong-headed new recruit to a federal agency that’s tasked with investigating these odd scientific phenomena and dealing with the aftermath. At first these are simply annoying and kind of frustrating, resulting in traffic snarls or corners of your house you can’t go in. Eventually the stakes increase.

What Oliver and Rodriguez did really well was that escalation in stakes over the course of the series. There are revelations of what exactly is happening and how it’s much more serious than first believed. New characters are introduced that are important to the fate of the universe and it turns out there is indeed a Big Bad of some form pulling the strings. If you cut out some of the more existential ponderings this could make a solid two-hour story. Justin Marks was tapped for an adaptation back in 2014, but that’s the last news on that front.

I loved loved loved Caitlin Kittredge’s series from a few years go. The story focused on Eve Coffin, the youngest member of a long-running family that has deep ties to dark magic and witchcraft. She has essentially rejected that lifestyle following a terrible incident in her teenage years, now working as a Boston cop. An on-the-job incident brings her back to the family home where all sorts of old wounds are reopened and old evils unleashed.

Eve’s story would be captivating to watch on-screen as we see her try to maintain some respectability, largely involving distancing herself from her family. The supernatural components offer a great hook into a very personal story about defining yourself and carving your own path in the world. The right actor in the role of Eve would make all the difference as she needs to be both troubled and optimistic. 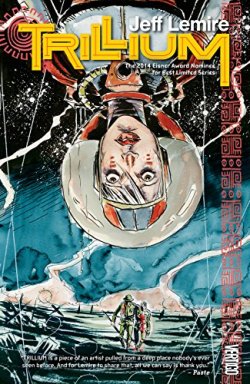 Jeff Lemire was always one of my favorite people to chat and work with at conventions, which was great because his work was always so outstanding. Trillium came after his much-lauded series Sweet Tooth and was even more genre-bending. There were two simultaneous stories happening, one set in 1921 Peru and one in 3797 that’s set on a far-flung space colony.

I’d love to see Lemire’s story on the big-screen in a 2001-type adaptation, one that emphasizes the mind-twisting elements of the relationship between the two main characters, especially if someone made the film in a way that’s as innovative and unconventional as how the comic was presented. It’s got aliens, it’s got time travel, it’s got everything. In the right hands, this could be awesome. 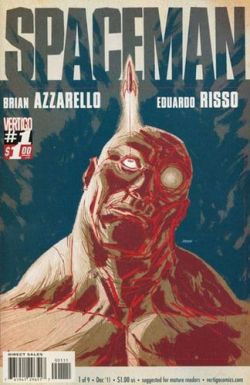 The 100 Bullets team of Brian Azzarello and Eduardo Risso for this story set in the distant future where the Earth has been ravaged by climate change. Orson is a genetically-modified humanoid who was once a NASA astronaut designed specifically for missions to Mars. Now, though, he scrapes by salvaging scrap metal, which he’s well-suited for, given his bulk and strength. One day he becomes involved in a celebrity kidnapping case.

It’s a heart-wrenching story that touches on themes like solitude, predestination, celebrity, empathy and more. It’s complex and more than a little inaccessible given Azzarello’s storytelling style. But it would make a compelling movie that encapsulates some universal topics – including accepting someone for who they are – as well as allowing for some great sci-fi spectacle.