It’s interesting timing that a movie telling the story of how P.T. Barnum began his famous (and sometimes infamous) American Museum comes the same year the circus that for 146 years bore his name shut down. The Greatest Showman sees Hugh Jackman starring as Barnum, beginning at a low point in his life and career, suffering one setback after another. He soon devises the idea to collect oddities and people of interest and fascination under one roof, then charge admission for the public to see them.

Descriptions of the movie have been careful to use the word “inspired by” when alluding to how much of the story should be taken with a generous helping of salt. That story includes Barnum’s wife Charity (Michelle Williams) and Philip, the production assistant who joins him in his quest for show business fame (Zac Efron) as well as Anne, the young performer who catches Phillip’s eye.

The first poster plays on the idea of making your dreams into reality. So we see Barnum in the top half, his arms outstretched to an empty auditorium. In the reflection on the floor, though, he’s in full circus regalia and surrounded by dancers and others, the center of the action. “The impossible comes true” we’re told by the copy at the top. 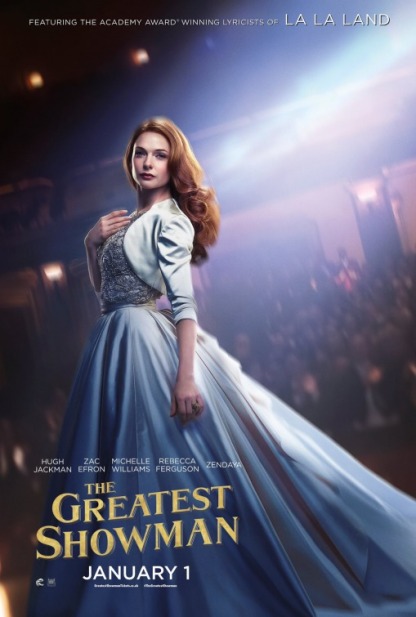 A series of character posters showed off the various acts in Barnum’s circus, including Barnum himself. They also are meant to show off the spectacle of the film and the grandiose design and costumes. Each one also proudly proclaims at the top it features “The Academy Award Winning lyricists of La La Land” to tie into something people already enjoyed.

The first trailer as Barnum hits rock bottom, laid off from the desk job he’s drudging away at. That gives I’m the opportunity to strike out on his own, though, and he has the idea to create a circus of unique individuals and performers. We see some of the fantastic visuals that help tell the story and a few inspirational pick-me-ups by Barnum, including him coining the term “show business” at the end.

I…kind of like it. I didn’t want to, but it more or less works for me. It’s kind of odd that there isn’t more overt attention paid to the fact it’s a musical but it’s also not all that surprising. It’s all about the visuals, with the song that plays through much of the trailer not seeming out of place at all.

The second trailer ups the spectacle even more, dismissing much of the story and cutting quickly to Barnum being fired and deciding to strike out on his own in a grand venture. We see him assemble the show and putting together his troupe of performers, who are feared and hated by the outside world. That leads to both success and a backlash. Unlike the first trailer, this one doesn’t hide that the movie is a musical. In fact it flaunts it from beginning to end, with big production numbers and lots of singing and dancing by everyone involved. Watching the trailer, I’m honestly surprised this isn’t a Baz Luhrmann joint as everything about it reminds me of Moulin Rouge.

The movie’s official website follows the standard Fox template, starting with the theatrical key art at the top showing Jackman as Barnum. Below that are links to the Facebook and Twitter profiles as well prompts to “Get Tickets” and “Win Prizes,” the latter of which takes you down the page to information on how you can win a hometown screening for you and friends.

The “Videos” section just has the two trailers, which is surprising how much other video material has been produced, including featurettes, interviews, song spotlights and more.

The “About section adds a link to the movie’s Instagram feed along with a synopsis of the story and the names of those who made the movie on both sides of the camera.

In “Featured Content” you can find out about the hometown screening sweepstakes as well as how the soundtrack was named one of Oprah’s “Favorite Things” as well as the “Greatest Week” New York City campaign that’s covered more below.

There are just four production stills in the “Gallery,” which is also underwhelming considering the focus on showing off the look and feel of the film throughout the rest of the campaign. After that is a collection of the “Posters.” The site ends with a section of the “Partners,” other companies that are promoting the movie in various ways.

The studio launched the “This is Me Challenge” in conjunction with YouTube, a sort of mini singing competition where the winner was revealed at a later date.

Taking advantage of a thematically appropriate opportunity, it was announced the cast would perform a “live trailer” for the movie during Fox’s live broadcast of the musical “A Christmas Story.” That spot was certainly technically impressive considering they had a substantial cast to coordinate with music and timing and other factors. It was also kind of a mess, but that’s what live musicals look like on television. But it sold the pastiche and glitz of the movie, which is the whole point. Unfortunately the broadcast as a whole was a flop in the ratings and drew pretty poor reviews and commentary.

Other more traditional TV spots were also run that kept selling the spectacle, music and romance of the story. Some of those were also used as ads on social networks and video from the trailers, along with key art, were used in other online ads that have been ubiquitous across the web in the last couple weeks.

The promotional partner companies for the movie include:

The first good look at the movie, including photos of Jackman, Efron and the rest of the cast, showed up in early summer along with comments about how the story wound up being a musical and more. Another new photo came via EW, which also interviewed Jackman about working with Zendaya.

Various featurettes kept being released that focused on different aspects of the movie. For example, this one covered the development of the music and how it’s meant to be both timeless and contemporary.

Songwriters Paul and Pasek revealed “This is Me,” a key song that’s been featured in the marketing extensively, almost didn’t happen and resulted largely from the need to provide the cast of the circus something rousing they could rally behind.

There was a whole campaign that kicked off with Efron appearing on “The Today Show” to announce “The Greatest Week,” mentioned above.

With three big stars in the lead it was natural that all three would do serious time on the media circuit. Jackman, Efron and Zendaya all made the rounds. Zendaya talked about the work she put in on trapeze training and working with Efron in particular. Efron hit similar beats and Jackman frequently talked about how long it took for the project to finally come to fruition and how much work he put into getting in shape for the role. Efron and Jackman also showed up on “The Late Late Show” to reenact some of the most famous New York-based Broadway tunes with host James Cordon. A joint interview with Efron and Zendaya, one of many they did together, touched on how each connected with the movie’s songs and in her case how she lobbied hard for the role.

It wasn’t all positive, though. The occasion of the movie’s release provided an opportunity for a reevaluation of Barnum’s actual legacy and his attitudes. Many pointed out his Museum of Curiosities played fast and loose with the truth about many of its subjects and often used racial myths to highlight “oddities” that were nothing of the sort, just meant to demean black and other people.

There are a few themes that have been hit time and time again throughout the campaign:

The spectacle, with the movie being sold as a lavish production, an old-Hollywood musical of sorts with big set pieces and outsized emotions.

The production, with numerous featurettes and interviews with the cast and crew talking about the level of rehearsal and training everyone had to go through to get in shape for filming.

The music, with everything ultimately centering around the catchy tunes filled with either romantic yearning or empowering self-actualization.

Ultimately the movie is being sold as a story of American exceptionalism, of how one man used his imagination and creativity to carve out his own destiny and create a global institution while doing so. The pushback about how Barnum was less than a champion of those in his exhibits in real life runs counter to the message of the movie, which seems to be filled with songs about accepting everyone and being comfortable with who you are.

Whether or not this is a strong enough message to get people to turn out over the holiday weekend remains to be seen.

Commercials like this one for the home video are designed to specifically appeal to the segments of the audience who called for a sing-along theatrical release of the movie, something that happened earlier this year.

Not only does the movie’s soundtrack continue to go gangbusters on the chart but there’s apparently another album coming later this year featuring pop artists covering some of the songs from the film.

Part of the pushback to the movie (which didn’t impact box-office very much, it seems) has been that the portrait of P.T. Barnum it paints isn’t super-realistic. Features like this show the true story of one aspect the movie takes liberties with.

You remember how the marketing for the film couldn’t (at least after the first trailer) keep the characters from singing? That emphasis on the music has helped the soundtrack not only hit #1 on the Billboard charts, but do so two weeks in a row, only the fifth such album in the last decade to score consecutive top slots.
NBC used “This Is Me” from the movie in an inspirational commercial promoting the upcoming Winter Olympics coverage, seeming to overlook that the song is about being proud in your outsider status and drowning out the crowds calling you a freak, not just about achieving greatness. Still…not the most tone-deaf spot during the Super Bowl thanks to the presence of Dodge Ram and its commercial using an out-of-context snippet of a Martin Luther King Jr. speech.

Jackman announced in late November he was reviving a one-man tour, including performances of songs from the movie.

One thought on “The Greatest Showman – Marketing Recap” 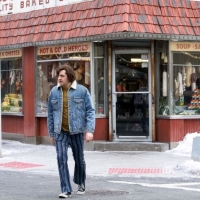