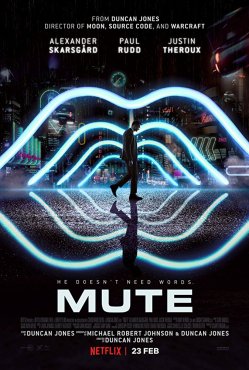 Writer/director Duncan Jones made a big splash back in 2009 with Moon, his debut film starring Sam Rockwell as a solitary astronaut manning a moon base. Source Code was well received but not super-successful but Warcraft, his foray into big-budget fantasy, flopped in the U.S. while still being a massive success overseas.

Now he’s back with, Mute, a movie set in the same universe as Moon but otherwise (seemingly) unconnected from that story. Set 40 years in the future, Alexander Skarsgård plays Leo, a mute bartender working at a Berlin establishment who has a reputation as both a good man and someone not to be trifled with. When his girlfriend goes missing the main purpose of his life is removed and he sets out to find her. That brings him into contact with the city’s underworld elements, including Cactus Bill (Paul Rudd), Duck (Justin Theroux) and others.

Leo strolls down the street in front of a giant neon set of lips on the poster, showing us the solitude of the character as well as hinting at the futuristic setting. “He doesn’t need words.” we’re told while at the top the impressive cast is listed along with Jones’ previous films to help establish his credentials among those who aren’t already fans.

The trailer starts out by introducing us to Leo, who’s described as a “good man,” though someone with a bit of a temper. From there on out it’s more about the visuals and the style than anything else. The only hints we’re offered as to the story involve Leo’s girlfriend having secrets that are very valuable to some people. It’s clear Leo isn’t well-liked by many of the unsavory types he encounters, but that’s about it.

What’s being sold here is a vision, just as much as any other film of its kind. The characters will all act in certain ways and shift from being friends to adversaries, but it all happens in a fully fleshed-out world of Jones’ design. Yes, there are obvious comparisons to Blade Runner that can be made, but more interestingly are the little character quirks evidenced by Skarsgård, Rudd and Theroux. That’s what provide the strongest hooks for the audience.

While there wasn’t any hub website for the movie (not unusual for a Netflix release), where profiles on both Twitter and Facebook where, at least on the former, Jones in particular shared updates from production, filming and more.

Nothing that I’ve seen so far but it’s not unusual for Netflix to wait until after a movie is available to start some targeted and retargeted online advertising.

There had been lots of conversation about the movie when it was greenlit and as it entered the production cycle, but the biggest initial bump came when news broke it would get a dual Netflix/theatrical release. It was quite a while before a handful of first-look stills along with an official synopsis was released.

In the short period between the movie finally getting a release date and it coming out, Jones spoke about the realities – both good and bad – of working with Netflix. He admitted this is the kind of mid-grade feature studios don’t make any more and so was happy when the company came and allowed him to finally make a story he’d been working on for over 15 years. But he also bemoaned the fact that it meant no big-screen or physical home video release, something he was loathe to see slip to the wayside.

Skarsgard spoke about the movie and working with Jones in a couple interviews like this one. And Rudd showed up on “Fallon” to promote the film, though that appearance was covered mostly because of the pair’s recreation of a classic early 90’s music video than what he said about Mute.

Netflix is on the tip of everyone’s tongue when it comes to science fiction these days, what with its acquisition of The Cloverfield Paradox, a deal involving Annihilation and more. Surprisingly, this hasn’t been caught up in that conversation despite it fitting very nicely into that current narrative.

I hope the campaign works. This is clearly a passion project for Jones and he has a loyal fanbase on the internet who have been attracted to his accessibility in addition to his talent. The continued reminder of the film’s connection to the beloved Moon is a big part of that, hoping to turn out the audience that made that film a decent hit. More than that, I just love a good straight-up dystopian sci-fi and since Netflix is the place where movies like that, which may not work at the box-office in today’s marketplace, live my hope is that all the pieces come together.

Paul Rudd made an appearance on a special abridged version of “The Tonight Show” where he kinda sorta was able to promote the movie.

Director Duncan Jones talks here about the effect his father’s “Berlin” period had on his writing and development of the story, which is set in that city.

Director Duncan Jones spoke with fellow filmmaker Rian Johnson about the experience he had working with Netflix, which he makes clear has both upsides (creative freedom) and downsides (zero insights into who’s actually watching the movie).

Costars Paul Rudd and Justin Theroux are interviewed jointly about working together for the first time in a while as well as how it was getting involved with Jones’ production and story. There’s also this interview where they talk about how the characters they play are based on Hawkeye and Trapper John from the original Robert Altman MASH.

One thought on “Mute – Marketing Recap”