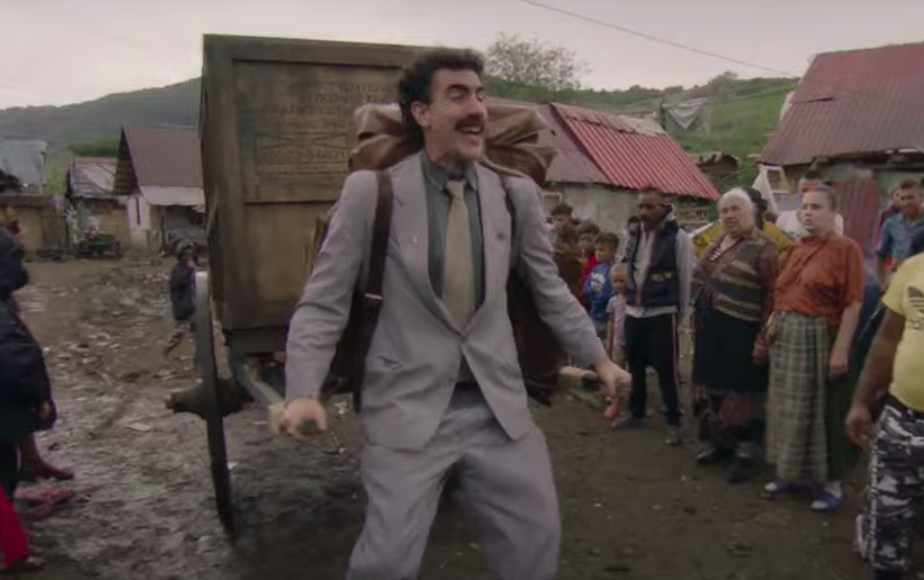 How Amazon Studios has sold a wholly unexpected October Surprise.

It’s been 14 years since Sacha Baron Cohen brought the character of Borat to the big screen, taking the Kazakh journalist on a road trip across the United States to “investigate” what ordinary Americans were really like.

This week Amazon Studios releases Borat Subsequent Moviefilm, an appropriately awkwardly titled sequel that had long been rumored but only became reality a few short weeks ago. Once more the movie finds Borat (Cohen) – this time with daughter Tutar (Maria Bakalova) in tow – on a journey across America to conduct incredibly inappropriate interviews with the everyday folks, and a few well known individuals, to learn what makes them tick. This time the movie seems to have a more overt political agenda, specifically to shine a spotlight on the kind of people who wear MAGA hats and unquestioningly adore certain Dear Leaders.

The movie arrives, of course, as the U.S. presidential election cycle nears a none-too-soon merciful end. And, as we’ll see, the marketing has benefited from some last minute intersections with that cycle.

Borat stands on October’s one and only poster (by marketing agency Concept Arts) in an outfit similar to the…revealing…swimsuit he made famous in the first movie. This time, though, that outfit is a surgical mask, the kind people have been encouraged to wear for the last several months to stop the spread of Covid-19. “Wear mask. Save live.” is the message of the poster, one brought to use by the faux Kazakhstan equivalent of the U.S.’s CDC. It’s kind of brilliant.

A teaser (610,000 views on YouTube) released just after the news of the movie’s existence was confirmed announced the impending release of the first trailer, which happened the next day.

That trailer (7.6 million views on YouTube) shows the same sort of insanity from the original will be in this second installment as well. Borat once again is traveling to America to find out about our exotic lifestyles and this time has brought his daughter along for the antics. There’s lots of Borat goading various folks into ridiculous situations and activities, filming their reactions to his actions that are sometimes bewildered and sometimes bewildering.

Some of the first marketing activity took place on Twitter through a fake account purported to belong to the Republic of Kazakhstan, Borat’s home country. That account was active throughout the first presidential debate, praising Trump – including a “congratulations” message posted before the debate ended – and taking shots at Biden.

Borat himself joined Twitter shortly thereafter. Both accounts continued posting regularly over subsequent weeks, either straightforwardly promoting the film or offering Borat’s unique take on American politics and how the campaign was going.

Amazon made the surprise announcement in late September that the movie was coming out soon, potentially before the November 2nd presidential election. It also confirmed that the film had been filmed over the course of the last few months, including during the pandemic, largely in secret.

The same key art seen on the poster, along with short video clips, were used for different styles of online ads, all leading to Amazon’s page for the movie.

Cohen appeared in character in a Twitch livestream with a popular broadcaster. And Amazon sailed a massive inflatable Borat on a barge down the Thames in London.

A couple clips have been released showing off a small bit of what audiences can expect from this new installment. None, though, generated as much coverage and awareness of one purporting to show Rudy Giuliani – former mayor of NYC, European dictator lobbyist and current personal attorney to President Donald Trump – entering a hotel room by himself with Borat’s (fictional) 15 year old daughter. Giuliani then proceeds to stretch out on the bed and appears to put his hand down his pants before Borat comes in and stops what’s happening.

Cohen wrote an op-ed about the fight to save democracy and talked about aspects of filming this movie as part of that.

A substantial profile of Cohen had him talking about reviving the character of Borat specifically to draw attention to the dangers of fascism and dictatorship, both of which he felt were creeping into the U.S. over the last few years. He also shared some of the lengths he went to in order to covertly film key sequences.

The Giuliani incident, of course, dominated several news cycles and generated massive press coverage, including Giuliani’s press tour of denying doing anything wrong and labeling it as a hit job resulting from his efforts to baselessly smear the son of former Vice President Joe Biden. Of course those denials were met with responses and statements of support from Borat.

A handful of profiles of Bakalova have appeared recently, especially since her role in the film has played such an integral part of the Giuliani “incident.” She also appeared with Cohen, both of them in character, on “Jimmy Kimmel Live.”

Amazon surprised everyone by dropping the film a day early, making it available just as the final presidential debate between Trump and Biden was beginning, making the timeliness of the story even more apparent.

The Borat Subsequent Moviefilm campaign dropping into the last month’s worth of news cycles is all like this.

Amazon released a Q&A with Cohen. He also continued talking about the scene with Giuliani that has gotten so much coverage.

There was a lot of coverage of reactions from the ordinary people who became “victims” or Borat’s antics in the film.

Super interesting that Kazakhstan is simultaneously decrying Borat as bad for tourism and using “Very nice” as its new tourism slogan to capitalize on the movie’s buzz.

There was another profile of Bakalova, cementing her status as someone worth watching in the future. And another after that.