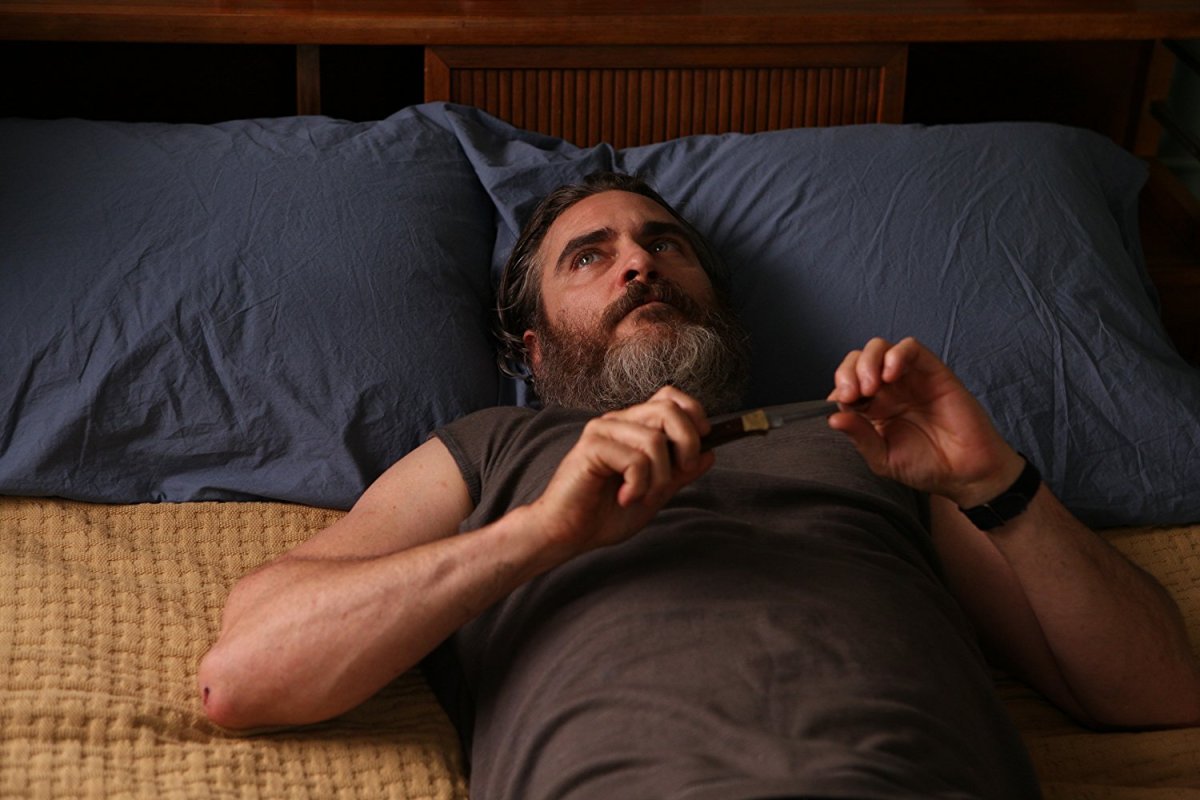 Joe (Joaquin Phoenix) is a violent man with a gentle soul in the new movie You Were Never Really Here. He’s a Gulf War veteran who has found a new line work as hired muscle, though only in the service of finding and rescuing missing teenagers. His reputation as someone who’s brutal but gets results brings him to the attention of a Senator whose daughter Nina (Ekaterina Samsonov) has gone missing and may be in serious trouble.

As Joe investigates outside the law he gets closer to Nina but also deeper into a world where he has trouble telling truth from fiction. His long-running attempt to use attempts to save innocents as a way to deal with the guilt of his own actions is failing and he’s increasingly paranoid and desperate. Even if he succeeds in finding Nina, the implications of his actions and the after-effects of his descent into a particularly-seedy world may have unintended consequences.

The first poster has Phoenix’s Joe looking down over a city street like some sort of displeased god. It actually reminds me a bit of Rorschach from “Watchmen” and his monologue about how he will refuse when the city finally asks him for help. Below his frowning face and placed in his translucent body we see him again in the middle distance with the girl he’s rescuing on his back. Ramsey is noted above the title but there’s’ no other copy outside the title that conveys any story points. This is just an urban vigilante story.

A whole series of posters conveyed some of the themes and story points in various overly-serious and artistic ways. A couple used images of Phoenix and Samsonov to show how he’s the great rescuer of this innocent young girl. One showed an illustrated version of Phoenix drowning in a body of water, with the surface represented by the title as if he’d fallen through that. The other, also illustrated, has Phoenix shown from the top-down as he walks away, a trail of blood behind him, all within the outline of an arm, the fingers of which are bloodied. It’s clearly a violent film being sold, one in which Phoenix’s stoic enforcer does some substantial damage. 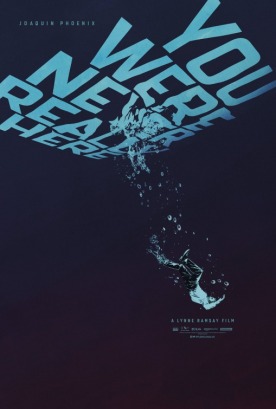 I understand they’re going for “gritty and violent” here but it’s astounding the extent to which these come off almost as parodies of themselves. I’m looking at these and I’m being sold a movie that’s so deadly serious it seems like it’s going to be a long, hard slog to get through and I’m probably going to feel worse about myself and the world at the end.

The first trailer immediately establishes Joe as someone who takes on ugly, violent jobs no one else will. He’s enlisted by a politician whose teenage daughter has been kidnapped to retrieve her, which he does with brutal efficiency. But he’s double-crossed in some manner, with the girl taken from his care by an unknown so he must set out again to find her and reclaim his honor from those who seemingly betrayed him.

Throughout the trailer there are quotes from critics who praised the film after seeing it at Cannes and elsewhere. It’s hard, though, to see it as much more than a white masculinity power narrative, one where the stoic, sensitive tough guy must preserve the innocence and purity of a young (white) girl from mysterious, corrupt evil forces. This looks like the kind of movie that would have been made in the late-60s in response to the growing distrust in institutional power and to reclaim the power of the white, morally-righteous white man in the face of the civil rights movement.

Amazon created a barebones website for the movie, with just the trailer, synopsis and a few other tidbits of information available alongside maps on where to buy tickets. There are links to the movie’s Instagram, Facebook and Twitter on the homepage but that’s it.

I have to stop here and note that Amazon decided on #BringTheHammer as the official hashtag on social media for the movie. Yeah, no. I get that it’s somewhat thematically appropriate given the prominence of a scene in the trailer of Joe buying a hammer with which to pound out some information from shady characters, but it sounds like a joke. That’s overlooking the obvious glorification of violence it implies, of course. It sounds like the kind of thing someone threw out in a meeting hoping others would have better ideas and when no one did it just kind of got locked in.

The first TV spot that ran hit the idea that Joe is a stoic savior *really* hard, showing the basic outlines of the story and how he’s contracted to find Nina, a job he’s uniquely suited for but which isn’t as easy as it might appear. That and other short videos were used as social ads while online ads used the key art of Phoenix as a grizzled enforcer to drive traffic to the website.

While at Cannes the movie was picked up by Amazon. It returned to Cannes the next year as well. A short clip debuted around that second screening shows Phoenix’s self-made vigilante taking on an attacker without a second thought or much effort.

A while later there was a substantial profile of Phoenix where he talked about his career to date, upcoming projects and more. It also featured comments from Ramsey and others who all talked about working with him.

Director Lynne Ramsay talked about the story and working with Phoenix on a few occasions, including this interview where she made it clear audiences were free to assign it whatever message worked for them, what attracted her to Joe’s journey and more.

Phoenix was his usual grumpy self in other interviews like this and this, the latter from when the movie screened at Sundance a few months ago, reluctantly going through the motions of needing to promote his movie. There was also this much-shared interview conducted by none other than Will Ferrell, which had him and Phoenix alternately intensely engaged with each other or completely talking past each other.

The movie has a pretty solid reputation so far thanks to critics who have praised it in the wake of festival screenings.

The campaign leaves me cold, though. It may appeal to those who don’t feel there’s enough gritty violent neo-noir in theaters, but that’s not me. This looks, as I’ve mentioned, like a throwback to when the Vengeful White Male Who Works Outside The Law was a theatrical staple. If the audience really is supposed to sympathize with Joe, who’s really a teddy bear inside his violent, gruff exterior, this campaign does nothing to engender that feeling.

Instead we see a white guy once more being put in the position of being the savior of a young girl’s virtue, which isn’t exactly a relevant message these days. We’re being sold violence for the sake of violence here, not a redemption story. It it’s as innovative from a filmmaking and storytelling point of view as early reviews have claimed I’ll gladly eat crow, but there’s nothing interesting here for anyone who doesn’t feel cinema peaked with Dog Day Afternoon.

One thought on “You Were Never Really Here – Marketing Recap”