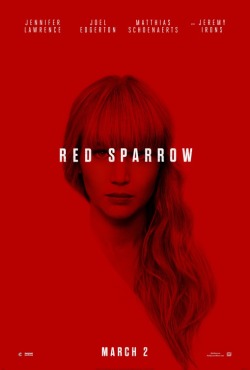 With so much conversation in the news about Russian intelligence operations and related issues, a movie about an undercover spy might seem a bit too real. But that’s exactly what we’re getting with this week’s Red Sparrow. Jennifer Lawrence plays Dominika Egorova, a young ballerina who is recruited into a special division of Russian intelligence called “Sparrow School” that specializes in turning young women into operatives capable of using any means at their disposal to achieve their objectives.

Her first mission is to target Nate Nash (Joel Edgerton), a CIA officer on his first assignment charged with managing the assets planted most deeply behind the Iron Curtain. When she arranges coincidental meetings between the two of them what starts out as pure manipulation and suspicion soon leads to something else that may have consequences not only for the two personally but the countries they’re proxies for.

There’s not much happening with the first poster, which features a solid red image (of course) with Lawrence looking dead-eyed into the camera, only one eye appearing between the words of the title, which is laid over her face.

The second poster has Lawrence looking at the camera over the shoulder of a man (presumably Edgerton), with a determined and slightly dangerous look on her face. Again, the entire thing is drenched in red, with “I know your secrets” communicating that we’re dealing with a spy or espionage story. 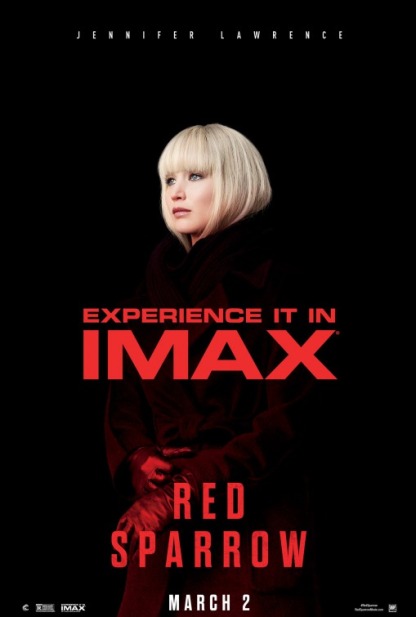 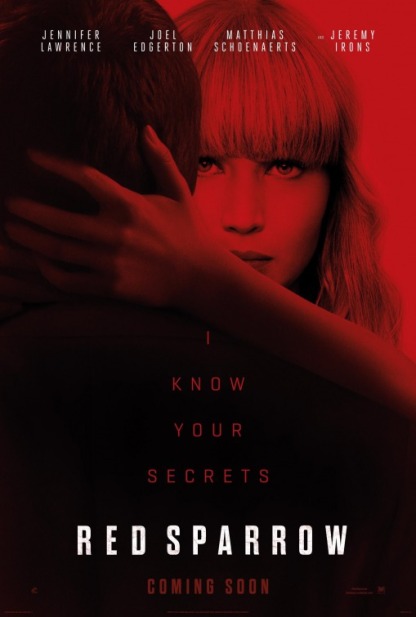 One more one-sheet offered a more unobstructed view of Lawrence, at least her face. The rest of her body is still hidden in red-tinged shadows while a huge “Experience it in IMAX” covers the middle of the poster.

As the first trailer opens we see Dominika as she sits in a hotel room, but she’s not the prostitute she initially appears to be, soon dispatching the man meeting her there. From there it’s a collection of shots of her training in a secret Russian facility and narration about the rumors surrounding highly-trained female assassins who use every tool they have to achieve their objectives.

It looks good, like a decent spy thriller. It also looks like the Black Widow solo origin movie Marvel should have made six years ago.

There’s much more story on display in the second trailer, which follows Dominika’s origin from an unwilling participant in a state-sponsored execution to her enrollment as an official espionage agent, trained to manipulate everyone around them. We see the kind of physical and psychological torture she’s subjected to as part of that “training” before she’s sent on an assignment to uncover a traitor who’s working with an American agent. He and she connect and she begins to use him as a means to escape the life she’s part of. But there are…trust issues and it’s unclear whether she’s actually looking for salvation or just using him as part of her mission.

It’s not the greatest trailer but it does present a tight thriller with some brutal action. Lawrence and Edgerton both seem solid, with her playing the cold but conflicted killer very well. The story isn’t shared all that well, though, focusing more on her origin story than on what’s going to drive the action of the film. I get that it’s all related, but I could have used a bit more clarity on who’s who and what they’re doing.

Fox’s official website for the movie is such a nice change after so many discount “just buy tickets already” executions. The site opens with a cropped version of the key art showing a determined Lawrence looking out at the camera with links to the Facebook and Twitter profiles below as well as prompts to buy tickets or watch the trailer.

The trailers and TV spots along with a handful of clips are available in the “Videos” section. That’s followed by “About” which is where you can read a brief synopsis, view cast and crew lists and find the movie’s social profiles again, this time including Instagram.

“Partners” offers information on the companies that are helping Fox promote the movie in various ways. After that is “Posters,” which actually just has the first one-sheet. “Featured Content” has links to get the novel of the same name, read a Q&A with author Jason Matthews and find out more about the Snapchat Lens that was offered.

TV spots like this one were a bit better than the trailer simply because there was less room to meander. They’re short and to the point, selling a story of espionage and intrigue where trust is betrayed (if it’s ever earned) and agendas changed. All the while, text keeps appearing intoning “A sparrow knows.” The origins of Dominika are explored a bit in the Super Bowl spot that was focused on her ability to see through people and survive because of it.

Shortly after it debuted the trailer was as a paid post on Twitter, as was the second trailer later on and some of the shorter TV spots. Those were also run as pre-roll on YouTube.

Some of the first press for the movie came as the result of a press event Fox held in London that featured the cast and crew talking about the movie and playing up the sexy espionage of the story.

Lawrence, of course, was the central focus of much of the publicity. That included a wide-ranging “60 Minutes” interview where she talked about Harvey Weinstein, the leak of nude photos a few years ago, her decision to become an actress and lots more. There was also a Vanity Fair cover story that covered much of the same ground, including how her decision to do nude scenes in this movie was at least in part an attempt to try to reclaim the power that had been taken from her.

She went out on the press tour as well, including a stop on “Colbert” that turned into a drunken laugh fest as she obviously stops caring and doesn’t go in on the usual BS.

Matthews was also interviewed about how Hollywood got ahold of and adapted his novel and what it was like to see all that happen. The ballet company that helped Lawrence train for her role got a nice feature spotlight as well.

Fox has had a fine line to walk with this campaign on a number of fronts, including but not limited to:

So how did it do?

I’ll say this: The campaign never feels manipulative or creepy, charges that were (understandably) leveled against Passengers, her sci-fi film with Chris Pratt from just a year or so ago. It obviously conveys that there’s an element of sexual manipulation to the story – it would be hard not to – but doesn’t make that the central selling point, which is a nice change.

The publicity campaign also feels like a little bit of image rehabilitation for Lawrence, coming off the criticism of both Passengers and mother!. So she needed to go out and be her naturally charming self to win people back after a couple misfires.

To bring it all home the studio rightly, I think, kept things relatively simple, with uncluttered posters and just a couple trailers. The advertising volume has crept up in the last weeks alongside the full-force publicity, but that’s to be expected. If this movie can garner some decent reviews and word of mouth it could help bring out a more adult audience that is attracted not just to the stars but to the spy genre as a whole.

Many of the same issues I identified as needing to be overcome by Fox in selling the movie are also mentioned in this MediaPost article, which focuses on the partnership between the studio and vodka brand Stoli.
Nice profile here of director Francis Lawrence, who’s trying to be as chill as possible about the movie’s box-office outcome.