The Fifty Shades series finally reaches its conclusion in this week’s Fifty Shades Freed, the rare recent example of a final book in a franchise being contained to just one movie and not split into two installments. Dakota Johnson and Jamie Dornan can, at long last, breathe a sigh of relief that their time playing Anna and Christian, two people sharing a deep connection based on their love of Twilight fan fiction, is over.

Before they can check out it’s time for one more overwrought soap opera steeped in gender roles and self-esteem issues. This time Anna and Christian have stopped living in dirty, dirty sin and gotten married, exactly the kind of old-fashioned tradition people with commitment issues long histories of casual relationships engage in all the time. But there’s still danger lurking as someone something with a gun and then another flirting and wow sex car chase before honeymoon reboot in 2025.

The first poster flips the script, putting Anastasia in the usual pose affected by Christian on previous one-sheets. She looks back over her shoulder, clad in an ornate wedding gown, standing above an incredibly-manicured garden. “Mrs. Grey will see you now” also helps to establish that she’s the focus of this story, a line that will be used repeatedly throughout the campaign. 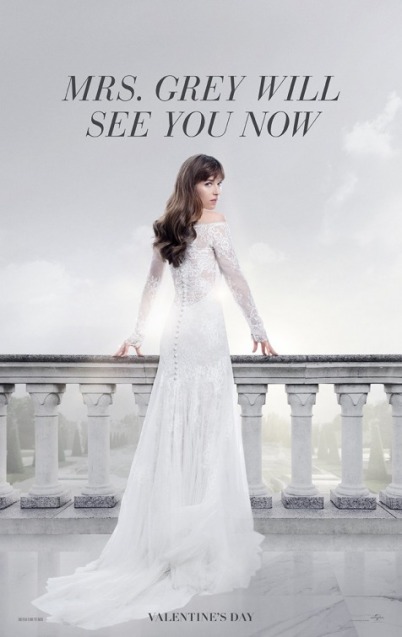 The second poster just shows her, still wearing her wedding gown, as Christian comes up behind her. The next poster shows Anna and Christian in the midst of a moment of passion as the copy says “Don’t miss the climax” in the least subtle tagline in history.

The first teaser is, of course, as ridiculous as anything else in this franchise. The opening montage and narration is about the wedding of Christian and Anastasia, though apparently he’s still keeping enough secrets that she can be surprised he owns a private jet. They’re off on their honeymoon where there’s more kinky play and it ends with an intruder holding Anastasia at gunpoint. Because nothing says “2017” like putting the female character in danger to heighten the tension.

The official trailer starts out with the happily married couple enjoying a moment of bliss before they jet out for exotic locations. Things start getting dark, though, when new people join Anna’s firm and a beautiful home designer brings out Anna’s territorial side. It just gets worse when her ex returns and starts stalking her. Suspicion mounts and the danger intensifies and I couldn’t be less interested in what happens to these characters.

Interestingly, the next trailer is very noticeably from Anna’s point of view, starting off with scenes from the first two movies and then coming from her perspective as we hit many of the same beats as the earlier trailers. So there’s a lot of footage we’ve already seen, just rearranged. But the shift in point of view comes after the emergence of the #MeToo movement where women are reclaiming their agency, something these books and movies have been consistently criticized for not doing. It ends with major plot point that literally no one cares about.

The official website for the movie is built on Tumblr and so is designed with that platform’s audience in mind. The key art appears on the front page along with prompts to buy tickets or view the trailer again. As you scroll down the page you’ll be able to grab or share lots of GIFs and other images. In the midst of all that are sections for the “Story” and the “Cast,” each of which has the kind of information you’d expect.

If you open up the content menu you can also choose “Social” and find links to the movie’s Facebook, Twitter, Instagram and Pinterest profiles. Most of those have the usual assortment of news and photos, but the Pinterest board really does try to curate thematically-appropriate material including high-end wedding items and more.

There was also some sort of interactive experience at the website setup for the Seattle Independent Press, the publisher Anna works for. As usual, though, the studio couldn’t commit to the premise and so the site, which exists within the world of the movie, also explicitly promises those playing along will be able to access exclusive content from the movie.

There were a few online ads I was exposed to that repurposed the key art and linked to the official site where people could buy tickets. And the trailers were often used in promoted posts on Twitter and Facebook. Surprisingly, I couldn’t find any domestic TV spots online, though based on Twitter chatter there seemed to be at least one that aired during the recent Grammy Awards broadcast.

Saks Fifth Avenue signed on as a promotional partner, as it has done with previous films, putting displays of fashion based on the movie in store windows in New York City.

Fanning made a few TV appearances to talk about wrapping up the series and answer a lot of uncomfortable questions. Other than that the main generators of publicity and press were either the release of clips to the kind of lifestyle magazines that used to be found on supermarket shelves before they folded their print editions or the soundtrack, which features a bunch of artists who aren’t Rush so why does it matter.

I think my position on this movie has been made clear. Therefore I will simply leave you with the trailer to “Ben & Kate,” the show Johnson starred on with Nat Faxon that was pretty funny and tragically short-lived.