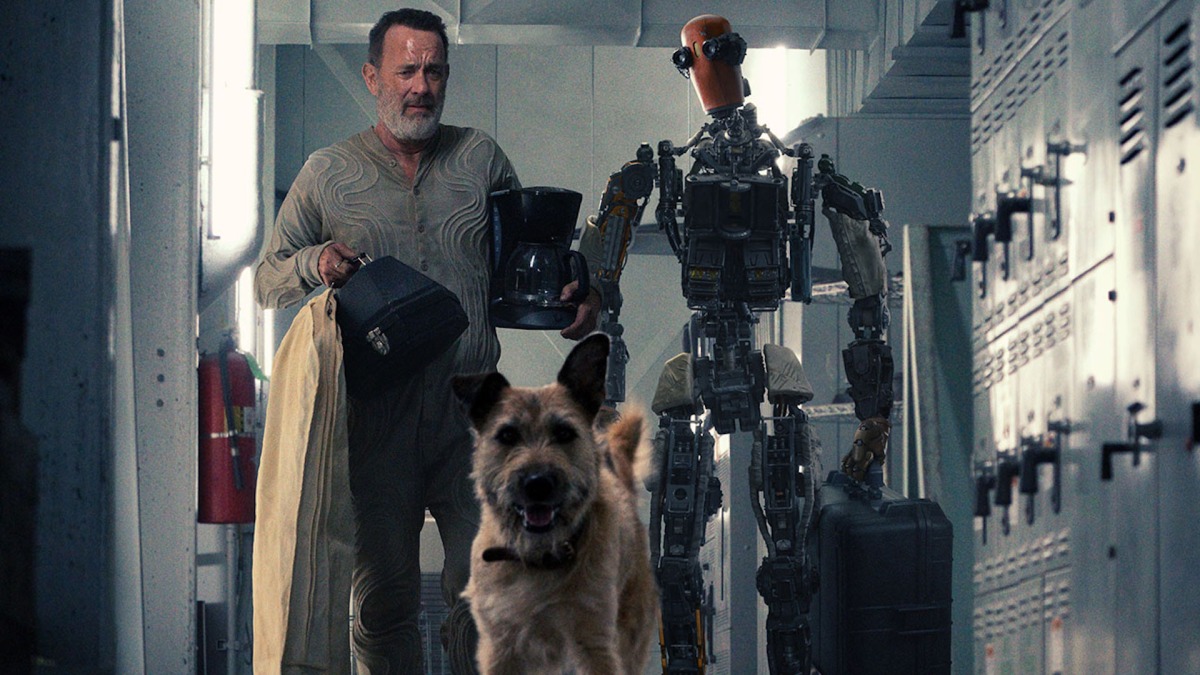 How Apple has sold a drama of cataclysm and friendship.

It’s easy to draw comparisons between Cast Away and Finch, the latter debuting on Apple TV+ this week, which is why so many people have done just that. After all, both movies star Tom Hanks and have him acting opposite a non-human object in a largely solo performance.

This time it’s not an uninhabited island he’s seeking to escape but the desolated Midwest. Hanks plays Finch, an inventor who has survived the devastation caused by a massive solar flare that destroyed crops and killed nearly everyone on Earth. Along with his dog Seamus he tries to stay alive while building a robot companion (Caleb Landry Jones in a motion capture performance) he names Jeff. With a dangerous storm approaching where he lives, Finch decides the time is right, with Jeff’s help, to make a treacherous journey to where he hopes he’ll find safety and maybe other survivors.

News of the movie, then called BIOS, first came in late 2017. Both Hanks and Sapochnik were already attached at that time and the project was reported to be the subject of a decent bidding war between various studios. Amblin Entertainment acquired it shortly after that and set distribution through Universal Pictures.

Jones was cast in early 2019 to provide the motion capture performance for Jeff, with others added later in the year.

With production completed in 2019, Universal originally set a release date in October 2020. In response to the Covid-19 pandemic and the resulting theater closures and other delays various further release dates in 2021 came and went.

Finally news came in January of this year that Universal had sold the movie to Apple TV+, which gave it a new title and, in August, a new (and ultimately final) release date.

.@TomHanks is #Finch, the head of an unlikely family on a journey to rediscover the joy and wonder of what it means to be alive. Streaming November 5, only on Apple TV+ pic.twitter.com/fJxsd7zOdH

The first trailer (4.8m YouTube views) came out in September, effectively kicking ffo the actual marketing push. As it starts Finch is explaining how a sudden powerful solar flare destroyed crops and killed much of the population. He survived in part because he found a canine companion he took in. Now he’s working on a robot to help the two of them escape their shelter and find somewhere safer to live but time is running out and other threats are waiting for them on the road.

A poster showing Finch, Jeff and Seamus (the dog) looking out over the apocalyptic wasteland that surrounds and awaits them. It’s not a marvel of design by any stretch but effectively that Hanks is in a movie with a dog and a robot and that’s really the core message anyway.

Sapochnik was interviewed in October about working with Hanks, pandemic-related production shutdowns, the shift from Universal to Apple and more.

A “First Look” came out at the end of October that features Hanks explaining the movie’s story, setting and characters as well as the drama and relationships between the characters.

Hanks then appeared on “Kimmel” to talk about the movie and more, including the recent passing of friend and frequent collaborator Peter Scolari. He made a number of other media rounds as well.

A premiere event was held in Los Angeles with Hanks, Jones and others in attendance.

The first (and only) clip was released via PlayStation.

With a 70% Fresh rating on Rotten Tomatoes it’s not doing too badly in the reviews department, with many critics specifically noting they were surprised at how heartwarming and emotional the movie was.

In part that’s because the campaign hasn’t done a great job of communicating that emotional element. A lot of time is spent on the technical aspects of Finch making Jeff and planning their escape ahead of the encroaching storm but even though Hanks can be seen emoting throughout the trailer it’s not clear what those emotions are based on or what they mean.