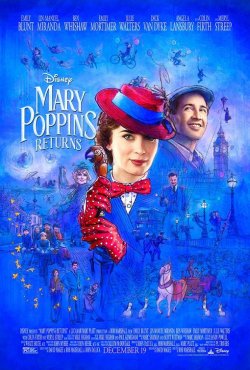 It’s hard to think of a more iconic marriage of role and actor than Julie Andrews’ performance as the title character in Disney’s adaptation of Mary Poppins. The story of that production, and the fierce guardianship over the characters by author P.L. Travers, was told in 2013’s Saving Mr. Banks. Travers was reportedly so unhappy with some details of that adaptation she ruled out any further movies with the character.

Now the managers of Travers’ estate have given their consent and Mary Poppins Returns is about to hit theaters. Estimated to bring in $40 million it opening weekend, the movie casts Emily Blunt as Poppins, who returns to the Banks household decades later. Jack Banks (Ben Wishaw) now has two children of his own but is living with his sister Jane (Emily Mortimer) following the death of his wife. Poppins’ arrival once more involves a kindly lamplighter, this time Jack (Lin Manuel-Miranda).

It’s a very simple message on the first teaser poster, which just shows half of Poppins’ face looking slightly off-camera. That’s it: Mary Poppins has returned and we’ll find out more around Christmas. Simple but…simple.

A more artistic approach is taken on the second poster, which positions Poppins and Jack as the central elements in a collage of images that include different aspects of the story. 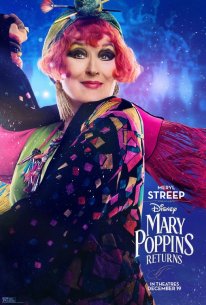 The teaser trailer works super-hard to recreate the magic of the original film. It’s all about setting the stage, though, with wind blowing and kites being flown and more, all leading up to Poppins descending from the sky and being told by two people that it’s wonderful to see her again.

The story is finally laid out in the full trailer, which shows that the Banks children are now grown and living together after Michael’s wife passed away. His children come home one with Mary Poppins in tow as she announces she’s back to once more take care of the family. Immediately she’s showing off her incredible abilities, much to Michael’s occasional dismay. There’s a big animated musical number, Dick Van Dyke is shown reprising his role as an old banker and more and this looks delightful, a much-needed dose of whimsy in the world.

You’ll find only the very basic information about the movie on Disney’s official website, including a collection of videos and photos along with links to the promotional partners.

There were a host of new editions of the original book as well as other material released both in conjunction with the movie and to draft off it.

The second trailer was boosted using a Promoted Tweet the same day it was released.

It plays like a TV spot, but was labeled a “Sneak Peek” when it was released in mid-November. Whatever the case, it shows the basic outlines of the story, ending with a big musical number to show the movie doesn’t lack ambition or fidelity to the original. An actual TV spot came out a bit later that showed how Poppins reenters the Banks family and what sort of possibilities for adventure she unlocks.

While there were certainly conversations and speculation about the movie, the first official publicity came in the form of first-look stills of Blunt as Poppins and Miranda as Jack.

Later on a big cover feature story in EW gave more looks both of the movie itself and the behind-the-scenes action, with the actors talking about stepping into such iconic roles, updates on the characters, what the actors drew on for inspiration and lots more. More photos came in EW’s San Diego Comic-Con issue. Those hit around the same time attendees of Disney’s D23 event got a first look at footage from the movie.

Blunt was promoting A Quiet Place but also spoke while on publicity circuit about this movie, including how vaguely creepy the character of Mary Poppins was, whether or not she had been in contact with Andrews, how Miranda “came alive” during the filming of the big musical numbers and more.

The movie was among those Disney teased to distribution execs and press at CinemaCon. The movie was also part of the later CineEurope presentation from the studio. In mid-October it was shown off to exhibitors at the NATO industry conference.

Another new photo came up in EW in mid-August.

A “Special Look” released in late-October offered a glimpse at some of the movie’s animated musical numbers. Another featurette from mid-October had the cast and crew talking about how they decided to get involved with a sequel to the beloved classic film and how they went about making it.

Marshall and Blunt were interviewed together about how they wanted to make a joyful, fun movie for the whole family. Around the same time Miranda was interviewed about getting involved in the project and movie musicals as a genre. EW offered a cover story in early November that contained all sorts of new interviews and details about the movie.

Blunt made the TV rounds closer to release to talk about how her family reacted to her in the role and more. Miranda did likewise, talking about how much fun he had making the movie as did Mortimer in early December.

The first clip from late November featured Poppins’ return to the Banks household while a featurette released shortly thereafter made the connections between this movie and the original.

THR offered profiles of the costume design as well as how the production team recreated the London of the past and how Marshall felt responsible for guarding a precious part of Disney’s cinematic legacy.

The second reunion of Streep and Blunt was something both talked about while Miranda commented on the burden and responsibility he felt in taking on such an iconic story. Meanwhile Marshall was talking about how he convinced Blunt to take on a role with such significant (clears throat) baggage as this. The pressures of living up to the legacy of the original film were also mentioned by the cast and crew at the movie’s premiere.

A short featurette had Blunt talking about the unpredictable joy Poppins brings to the characters and story. Another clip showed how Poppins takes the kids into the magical animated world of singing and dancing. Further clips showed Poppins’ arrival and more musical numbers.

Character introduction featurettes began last week with one that focused on Topsy, played by Meryl Streep.

Interviews here and here with Miranda allowed him to talk about how he got involved with the movie, his inspiration for playing the character and his astounding career to date.

There were other TV features interviewing Blunt, focusing on the behind the scenes details and even profiling the nanny training school that inspired Poppins in the first place.

There are two options that occur to me based on how superficial the campaign appears to be: A) The movie is much deeper but Disney wants to keep things light and fluffy, or B) The movie as a whole is this superficial and offers the cinematic equivalent of marzipan.

Whatever the case, Disney is relying solely on nostalgia for the original here, without offering much of anything that’s new or unique. It promises to continue the story but doesn’t go to any lengths to explain how or in what way. New characters are shown, but the don’t bring much beyond what you could find by rewatching the original movie. That’s not the fault of the charming cast, it’s a choice that’s been made in how it’s being sold to the public.

Miranda continued making the television rounds with an appearance on “The Tonight Show” that included lots of singing and dancing. He was also interviewed on just about everything here and talked with Seth Meyers later on. He also kept singing the praises of his costar Blunt in appearances like this.

Google shared the story of a coding event they held for young girls that included a screening of the film.

Vanity Fair profiled Whishaw about his career to date and how this movie fits into that. Van Dyke was also interviewed about the story behind his decision to join the sequel and got a feature profile all of his own.

A “Now playing” TV spot focused on the magical nature of the story and characters. The animation team was interviewed about the core musical sequence as well.

Blunt continued sharing what it was that attracted her to the project, including her lifelong love of the character and stories.