Right now everyone is focusing on sound design as a result of A Quiet Place. In a story where the slightest sound can alert alien predators to your presence and cause them to pounce, it’s understandable that considerable weight would be given to every snap, crackle and pop.

There’s another example of sound designers having a bit of fun and using audio techniques to enhance the storytelling: The trailers and TV spots for Solo: A Star Wars Story.

For as much as I was beginning to get worried about the movie, I was hooked when the first trailer starts off with a four-count before the action starts. Shown as a series of switch flips, those first two seconds of the trailer have a distinct 1-2-3-4 beat before the next 1 lands with a thud as the Lucasfilm logo emerges. While the rhythm isn’t maintained in the sound effects, much of the rest of the trailer does still feature a click track that continues that beat leading right into the swelling of the score.

If you keep the four/four beat going throughout the trailer, in fact, you notice that it’s edited in a way that’s timed with musical bars. Many transitions throughout the trailer happen on the 1 upbeat, including both the appearance of the “This Summer” title card and, toward the end, the moment where the music drops out before Solo responds to Qi’ra’s statement that she knows what he really is.

The same thing popped up in the “Crew” TV spot released earlier this week. The beat is a little bit faster, but if you start tapping while the score plays early in the spot you’re rewarded when you find a series of audio cues beginning around the :29 mark happen right on that beat. It all then ends with Solo tapping his cards on the table to that same beat, with the final tap happening on the 4 count downbeat of that measure.

Is this a trick being played by the trailer editors to create a sense of familiarity (humans feel comforted by beats because it reminds us of the heartbeat we listened to for nine months)? Probably. Is it a little bit of showing off by someone who thought they were super-clever? Also, probably.

Doesn’t matter. Solo needs to be sold on style and swagger, both characteristics long associated with both the title character and his fellow scoundrel Lando Calrissian. Adding something like that to the marketing feeds into that brand and character identity in a big way, even if the audience isn’t fully aware of what’s happening. It creates a loose, fun, atmosphere that helps position the film as being one we’re going to enjoy. 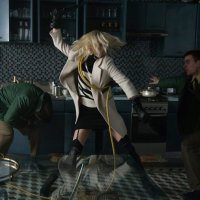