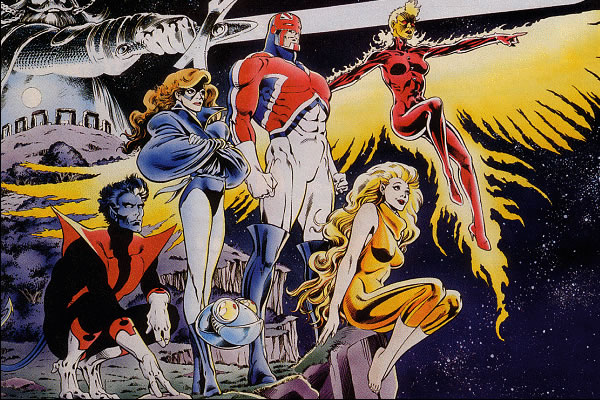 I’m way late to this, but news broke a while ago that Tim Miller and Brian Michael Bendis were teaming up for an unspecified X-Men movie project that many people assume will be a Kitty Pryde story of some sort.

I’ve never been super-familiar with Kitty as a character, something that resulted from my being more of an Avengers than an X-Men reader back in the day. I knew her backstory and that she’d gone through a handful of hero identities to that point but that was about it. Before picking up Joss Whedon’s “Astonishing X-Men” run, which was very Kitty-centric, there was only one book I’d read with any regularity that featured Ms. Pryde and it just so happens to be one that would make an outstanding movie.

Kitty was elsewhere when the main X-Men team and others were engaged in a massive fight against a villain known only as The Adversary, one they could only defeat by sacrificing themselves. While they’re quickly returned to life, it’s in secret so the world continues thinking them dead, one of the reasons the team relocates to Australia for a while. All of this happens in the “Fall of the Mutants” crossover event that spanned the X-books at the time.

Those events left Kitty feeling disconnected but still wanting to use her powers for good. So, along with Nightcrawler and the Rachel Summers version of Phoenix (as with most things involving that character…it’s complicated) she teams up with Captain Britain and his girlfriend Meggan.

The “Excalibur” series started with a one-shot special edition but then became a monthly series written by Chris Claremont at first and later Warren Ellis and others. The stories involved a lot of cross-dimensional travel and relied heavily on Captain Britain’s mythology, which made sense given that the team operated out of London.

But Kitty was always my favorite part of the series, which I collected for about two years. She was the most relatable of the characters, dealing with her own version of the awkward teenage years, too old to be simply a sidekick but also feeling old enough to assume some form of leadership mantle. Indeed, her participation on the team was often just as central as that of Phoenix or Captain Britain, who were ostensibly the heads of the team.

That’s what makes it such great material for a Kitty story. If you jettisoned some of the other elements and focused on her being on her own – or with Rachel – in London while she tries to figure out her future. It’s a journey of self-discovery and the search for identity, independent of the X-Men. If you wanted to amp it up even further, introduce the Kelsey Leigh version of Captain Britain and make it a trio of female heroes out to protect Earth from some inter-dimensional threat.

Sure, there are issues with the timeline that are sure to come up. Ellen Page has played Kitty in a couple of the X-Men films to date, but continuity issues haven’t exactly been paramount at Fox regarding this franchise, which has zipped all over the place with nary a concern. I’m more interested in a screen version of Kitty that’s as interesting as the one presented in Excalibur or “Astonishing,” a young hero who’s driven not out of rage or desire for revenge or even a sense of obligation. Instead she just wants to be a hero and help people. It’s pure and exciting and could make for a really powerful story. I hope whatever gets made lives up to that ideal.

2 thoughts on “The Kitty Pryde Movie I Want to See”