It’s hard to overstate how well-timed this week’s release of Call Jane actually is. Directed by Phyllis Nagy, the movie stars Elizabeth Banks as Joy, a suburban housewife in the 1960s who becomes pregnant, only to learn carrying the pregnancy to term would put her own life at risk. With abortion outlawed at the time, she turns to the informal network of women referred to collectively as Jane that helps women find safe abortion providers. Sigourney Weaver, Wunmi Mosaku, Kate Mara, Chris Messina, Chad Michael Smith and others costar.

As for the timing, the movie comes out just a few months after the U.S. Supreme Court overturned the Roe v. Wade decision that made abortion legal nationwide and just weeks before midterm elections that have been largely framed as a referendum on whether a woman’s right to make her own medical decisions is revoked entirely.

The story is “inspired by” real events, and the Jane organization was very real and a documentary on the group can be found on HBO Max. So with all that in mind, let’s take a look at how Roadside Attractions has sold the film.

Weaver, Banks and Mara were all attached when the project was announced in October 2020. Messina, Smith and others joined in mid-2021 when production began.

A well-received debut at the 2022 Sundance Film Festival this past January was followed by Roadside acquiring distribution rights a month later.

Marketing for the film began in earnest in mid-August with the release of the trailer (1m YouTube views). It opens with Joy finding out her pregnancy is dangerous to her own health and life, with abortion being the only option to make sure she herself survives. But the board of her hospital refuses to grant an exemption, so she reaches out to Jane for help and gets the procedure. Determined to then help others Joy joins the group, only to then be investigated by the police for her role in what at the time was aiding an illegal activity.

Banks interviewed Weaver about how this movie relates to the latter’s own social activism over the years as well as just her career in general.

“You are not alone” says copy on the poster, which came out in early September. It shows Joy in her car driving through a protest calling for women to be given the right to choose, Virginia (Weaver) most clearly seen through the window amidst the throng of women.

A feature profile of Banks focused on this movie specifically but also tied it to both her career as a whole and her increased advocacy for issues like abortion and LGBTQ+ rights and more.

There were some short promo videos that came out before but a full TV spot was released just a few weeks ago that follows a condensed version of Joy’s journey, from finding out her pregnancy is dangerous to her own health through joining the cause.

Joy gets picked up by Gwen (Mosaku) and learns more about the Jane group in a clip that came out earlier this month.

Just last week Roadside held the movie’s Los Angeles premiere with the cast and crew in attendance along with long-time activist Gloria Allred. The screening had the added benefit of aiding Planned Parenthood.

Weaver appeared on “CBS Mornings” to promote the film. She and Banks both appeared on “The View” to talk about the movie and the story it tells of life in the 1960s for women seeking abortions. That all followed Weaver’s time doing publicity for The Good House which came out just last month (also from Roadside) where she often mentioned this film as well.

To repeat myself, it’s remarkable how this movie is coming out at this moment, when the Dobbs decision from SCOTUS coupled with the potential return of Republican control of Congress has opened up the possibility of a return to the pre-1973 world of abortion being outlawed across the nation. That could then lead groups like Jane once again springing up to fill a need in the lives of women that would otherwise be unavailable, at least legally.

That point is made but not necessarily underlined in the campaign, by which I mean there’s clearly a point of view at work but it never becomes so overt as to lose all meaning. Also on the positive front, I could listen to Banks and Weaver banter with each other for a good long while.

If there’s a weakness it’s similar to other stories about various social issues from the mid-20th century: Namely, that it’s very white. There’s a brief moment where Mosaku’s Gwen calls out the rest of the group for making choices that once again put women of color at the bottom of the list, but that’s all the acknowledgement that’s offered. The movie itself may address the issue more fully, but that’s all we see here. 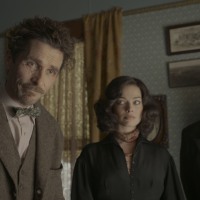