Netflix sold What Happened to Monday? as a dystopian science fiction about the lengths one will go to in order to protect family when society says they are disposable. That’s only part of what the movie delivers.

The story involves seven sisters – all named after one day of the week and all played by Noomi Rapace – who are hidden by their grandfather (Willem Dafoe) because the world is short of food and water and so has enacted a one child per family law. He raises them to all fit into a single persona, which they slip on when they are allowed to go out on the day of the week they’re named for. Eventually such a complicated arrangement begins to fray at the edges. Not only do the sisters, now adults, want to be themselves but they want to be unafraid in the world. When one of their number disappears the six others try to track her down but their efforts only make matters worse in many regards, setting into motion events that will impact not only themselves but the world as a whole.

Netflix’s trailer and other marketing efforts sold the movie as an action drama. Only around the edges of the campaign are there hints at the social commentary of the story involving the sacrifices and hard choices that must be made to ensure the survival of the human race as a whole. Those choices are embodied by Glenn Close, who plays the politician behind the “no siblings” policy.

Unfortunately the action drama elements often overshadow the social commentary in the movie. There are too many sequences of Rapace running away from government agents or engaging in gun battles or other close-quarters fights with them. Some of the violence is shockingly graphic, which took me out of the story more than it served to heighten the reality or stakes in play.

Because it’s so concerned with chases and physical fights the script overlooks some of the messages that it’s trying to convey. More troubling, the script sets up a dynamic that not only is never fully explored but actually winds up subverting expectations in a way that, once the movie is over, is frustrating and disappointing.

Throughout the film, Close’s character Nicolette Cayman is setup as the villain, the big bad who is ripping children away from their parents and siblings away from each other. She’s heartless and cruel and, of course, the “processing” those children are subjected to isn’t nearly as benign and compassionate as it’s sold to the public. All the actions of the Sisters are taken to not only find their missing member but also, at least in part, to take Cayman down. They want to expose her misdeeds and save the children who are being removed from society because they can’t imagine any one of them not being allowed to fully live.

Cayman has made hard choices and the one-child policy is undoubtedly heartless and cruel. But it’s also necessary. In the backstory that’s provided throughout the movie we learn that the world’s population has outgrown humanity’s ability to feed itself. That, combined with the effects of climate change, has lead to massive food shortages. The only solution is for there to be fewer people.

No one wants to see children suffer and the reality that’s exposed is even crueler than the public is lead to believe. But while Cayman’s solution may not be perfect it’s at least a solution.

The actions of the Sisters exposes what’s really happening to the children who are taken away, exposure that not only undoes her policies but leads to Cayman’s downfall and arrest. At the end of the movie we see a nursery of infants who are all now able to live because people are once more free to have children as they see fit.

What’s the impact of that going to be, though? The movie has spent so much time explaining how the old rate of growth of the human population was unsustainable. The Sisters’ actions result in a reversion to that previous growth rate, the logical conclusion of which is the end of humanity, which will slowly starve itself to death.

That ending undoes, at least for me, anything the story may have earned up to that point. While the Sisters are presented as virtuous and loving, the ending shows that love and compassion are shortsighted and irresponsible. I’m not advocating for mass incarceration or elimination of children, but then why the surviving Sisters smile at how pleased they are with their actions shows they haven’t considered the ramifications of their efforts. By celebrating their victory, the story undoes any goodwill the Sisters may have earned by their devotion to each other.

Again, only parts of the story are hinted at in the marketing, so there are lots of surprises – not all of them great – for the audience to encounter. They may be taken aback at the movie’s attempts at a Blade Runner-type aesthetic and the message of social responsibility. Mostly, though, I think they’ll be surprised at the massive and ill-fitting cop out the ending provides.

Catching up on recent marketing moves from films including Hidden Figures, Wind River and others.

What Happened to Monday

Ghost In the Shell

Stories of dystopian futures where society is being controlled in some manner often revolve around the hero that will rise up and challenge the oppressive system. What Happened To Monday, the new film hitting Netflix this week, makes the stakes a bit more personal.

Set a vague amount of time in the future, overpopulation and food scarcity has lead to governments putting population controls in place, limiting all families to one child each. Into this world are born septuplets, who are hidden by their grandfather (Willem Dafoe). He gives each the name of a day of the week and creates a system where they all take on the same identity, each going out only on the day they’re named after. Once they’re grown (and played by Noomi Rapace) something happens to Monday that has the potential to expose their secret and bring the full weight of the government down on the family.

The poster does a pretty good job of conveying a few different story points in a single effort. First, there’s the overall setting, which is shown here to be a city that looks as if it were pulled straight from Blade Runner. All the buildings are close together and tightly-packed, offering clues as to the state of society at this point. That’s helped by the “One family, one child” message that’s displayed on a couple of the buildings, a message that seems tied to the face that’s shown on other building exteriors. Toward the top we see seven women leaping across a gap between two buildings, a man with his gun drawn on the other side waiting for them. “Seven sisters. One identity.” helps convey the intrigue and subterfuge that will form the crux of the story.

There was some unofficial marketing done a while ago but the first official trailer hit just a few weeks before the movie’s release date. it starts out with the Cayman explaining that the siblings laws are there for the protection of all society and that illegal children will be taken away, their parents punished. We see then the father of newly-born septuplets conspiring to hide his children, explaining to them all the plan. The authorities are soon on to them, though, and lots of running, jumping, shooting and other action follows as the dragnet around them tightens.

I like the trailer’s pace. It’s a tight recap of the premise of the story and the action that will form much of the movie’s appeal. There’s no time wasted on explaining the backstory of the world it takes place in and why population controls are in place, it just states that reality and moves on to what’s important, namely the lives of the seven sisters. Dafoe is always great but let’s give it up for Rapace, who has to not only play seven different roles but play off six other versions of herself while doing so.

Nope. Netflix gave the movie limited support on its own social channels but that’s about it for online marketing efforts.

Similarly, another goose egg from Netflix, which doesn’t see movie-specific advertising as an important revenue driver.

After it screened at the Toronto International Film Festival news broke that Netflix had already picked it up for distribution.

Not a whole lot of publicity outside of that. Most of the press coverage over the subsequent months came from the release of various marketing materials or small comments from Rapace or Dafoe but nothing that amounted to a big press push.

Another movie with a really interesting premise and some well-known actors that are being given short shrift by Netflix in the marketing department. It’s too bad because this seems like a decent story that might have something to say about the path the world is going down, a cautionary tale of sorts. But the small-scale campaign is focused not on the story but on the shootouts and chase sequences that make for better visuals. There’s a nice consistent tone to the campaign as it’s all decked out in slick grays and blues, but it still suffers from just not being substantive enough to, I’d imagine, get on most people’s radar. 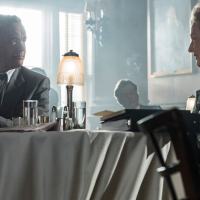