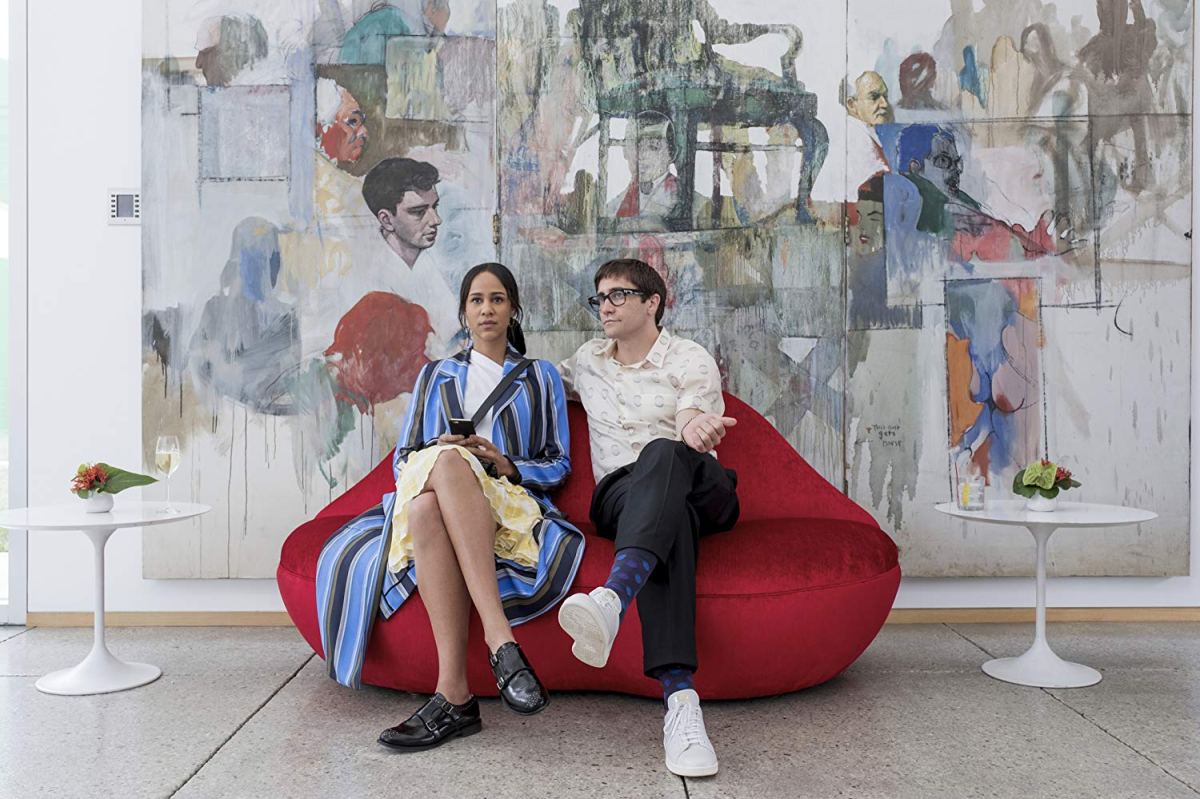 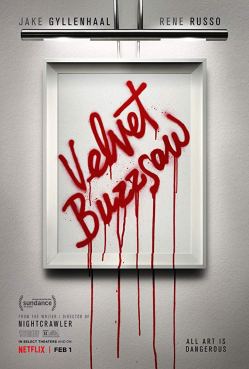 Writer/director Dan Gilroy reteams with his Nightcrawler stars Jake Gyllenhaal and Rene Russo for the Netflix-exclusive release Velvet Buzzsaw, available for streaming today. The movie is set in the world of high art and focuses on a collection of characters – a critic, a collector and others – who come together when the works of an unknown artist are discovered and set everyone’s sense for what’s hot tingling.

Things turn sour, though, when those with less than purely artistic motives begin falling victim to supernatural forces. The movie, then, asks what it means to be an art lover and why people do what they do in the industry.

The movie’s title is spray painted on a framed canvas mounted to the wall on the one-sheet, with the names of Gyllenhaal and Russo at the top and the promise it comes “From the writer/director of Nightcrawler” toward the bottom, the combination being an attempt to lure in the audience that made that one such a buzz-heavy hit. Not only does the way the paint streaks down the wall hint at something slightly amiss but so does the copy “All art is dangerous.”

We start off in the trailer by getting a full sense of how pretentious and assured Morf Vandewalt (Gyllenhaal) is as we see him critiquing – sometimes brutally so – the works of others at showings. He and Rhodora Haze (Russo) come across the mysterious but fascinating works of an unknown artist that have been found by someone after his death. It soon becomes evident there’s something sinister about the paintings as the people who encounter them begin having strange, inexplicable experiences related to them. These people who claim to love art find their feelings are different when it’s attacking them through mirrors, it seems.

This looks insane. When you have John Malkovich in a movie and he looks like the restrained one you know you’re on solid ground.

Nothing I’ve been able to find.

Nope, but it’s likely Netflix ran some pre-roll ads on YouTube and a few online ads to drive traffic to its site. It’s also received regular promotion in marketing communications from the company.

A first look still from the movie was released at the same time it was announced it would be screening at the 2019 Sundance Film Festival. It received good buzz and word of mouth there, well-timed to aid its release on Netflix just days later. Another exclusive image accompanied brief comments from Gyllenhaal on the story and his character.

Gyllenhaal appeared on “The Late Show” to talk about this movie and his experiences on smaller productions compared to comic book movie sets. The story of the moral compromises made by art industry insiders was covered in a joint interview with the cast and crew while Gyllenhaal and Gilroy addressed the “fluid” sexuality of the former’s character at the movie’s premiere. Gilroy pointed out that the roots of the movie lie in part in the failure of his Superman Lives project from decades ago.

Netflix is clearly hoping that the same people who loved Nightcrawler will be the ones talking up this movie and turning it into a buzz-driven hit for the streaming distributor. That this is a reunion of that movie’s core creative team is all over the campaign, including the poster and trailer along with much of the press and publicity.

Aside from that, the movie looks like the kind of psychological horror film that takes a single idea and runs with it to see how far it can go. To that end it mixes social commentary and tropes of the thriller genre into a single story that Netflix hopes will spawn memes, conversations and debates. Personally I can’t wait until we see stories about people taking the #VelvetBuzzsawChallenge, wherein they reach into a hole in a large object and someone hiding inside it grabs them.

Gilroy was interviewed about reteaming with Gyllenhaal and how he wound up working with Netflix, as well as the freedom he felt without having to worry about theatrical grosses. He also spoke about the collision of art and criticism and how he sought to bring the two together in the film as well as what he thinks of the modern art world as a whole. 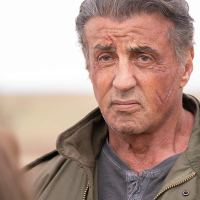 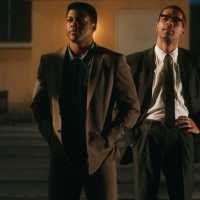