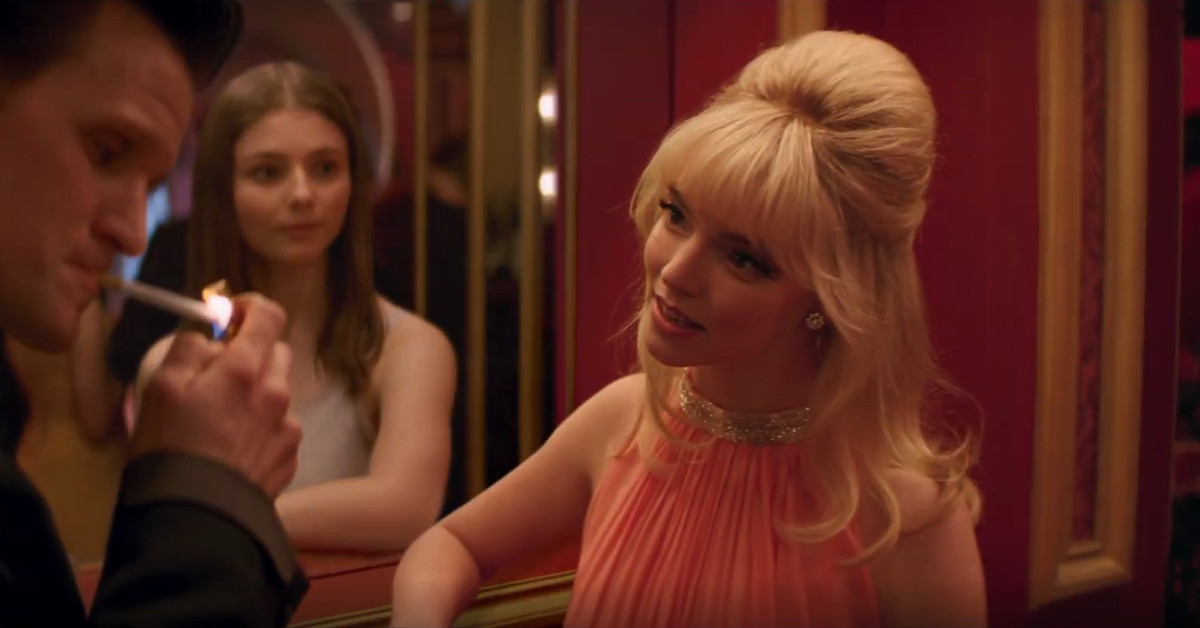 How Focus Features has sold a movie steeped in, and wary of, nostalgia.

For the second week in a row there’s a new film from one of Hollywood’s most unique and purposeful filmmakers. This time it’s Last Night In Soho from director Edgar Wright, who cowrote the movie with Krysty Wilson-Cairns.

Thomasin McKenzie stars as Eloise “Ellie” Turner, a young woman in London who finds she’s able to transport herself back to 1960’s Soho, becoming an aspiring singer named Sandie (played by Anna Taylor-Joy) when she does so. While Sandie’s life at first seems glamorous and free Ellie soon finds it’s not as wonderful as it first appeared.

The movie, which also stars Matt Smith, Terence Stamp and, in her last filmed performance, the late Diana Rigg, comes after a marketing campaign that’s been light on story but heavy on the kind of glossy, tightly-composed visuals Wright is known for.

Wright announced he was working on a movie set in 1960s London in early 2019, though it’s gone through a couple different working titles since then. Taylor-Joy was one of the first actors cast later that year, with others added between then and when production got underway.

The director got things started in September of 2019 with a post announcing the end of principle photography and offering the first look at the film.

When Taylor-Joy was promoting Emma last year she spoke briefly about working with Wright and how they bonded on set.

The movie was pulled from the 2020 release schedule amidst the Covid-19 pandemic, eventually pushed to an early 2021 date.

Wright spoke more about the movie and shared some exclusive first look stills with Empire in January.

Shortly after that another date change, this time to its current October 2021 slot, was announced.

Some news – my new film @lastnightinsoho will now be coming out later in the year. I know some of you may be disappointed, but my hope is more of you will be able to experience it as we intended; in the dark, on a big screen, with an audience. See you at the movies…10/22/21 pic.twitter.com/9DH4alnEyv

The teaser trailer (5.7m YouTube views)was released in late May. We get some of the point of the story and how Eloise is somehow able to bounce back and forth from the present day to the 1960s she draws inspiration from, but mostly what’s being sold here is a mind-twisting, time-bending visual treat from Wright.

At the same time the first poster was released, showing the bifurcated face of Ellie/Sandie seen through a rain-streaked window with each one’s respective time period represented in the background. It certainly communicates the neon-drenched visuals of the film, something that would become more common as the campaign went on.

You're invited to a journey back in time. #LastNightInSoho https://t.co/J4a7uCvJHK—
Last Night in Soho (@lastnightinsoho) May 25, 2021

In June news came that the film would screen at the Toronto Film Festival.

Wright was interviewed about casting the film, especially adding Rigg in what wound up being her final role before passing away shortly after she finished filming. He also talked about making the movie right after pandemic lockdowns were lifted and the importance of original stories.

Universal gave CinemaCon attendees in August a look at footage from this and other upcoming movies.

The movie’s screening at the Venice Film Festival in September included lots of comments and interviews with Wright and members of the cast. The director specifically requested that those in attendance not spoil anything about the story so audiences could experience it fresh when it was released, again about working with Rigg and about how dangerous it can be to get too caught up in nostalgia fetishes.

Smith was interviewed about making the movie in and about London while Wilson-Cairns talked about some of the real life inspiration she pulled from for her character.

Those came around the time the movie was not only at TIFF but also screening at the BFI London Film Festival, where Wright talked more about how making the past too idyllic in retrospect can be all-consuming to the point of self-destruction.

The second trailer (2.6m YouTube views)debuted in early September, in the midst of all that festival press and buzz. It opens in a more straightforward fashion than the first spot, with Ellie arriving in London as she studies fashion at university and gets her apartment there. What she thinks is dreaming about heading back to the 1960s is much more than that and Ellie/Sandie becomes intent on becoming a singer. But Sandie’s fate is much darker than that, leading Ellie to try and bring her some justice, even if there are risks to doing so.

Another Total Film cover story went behind the scenes on the making of the movie.

The second poster, released in mid-September, still has both Ellie and Sandie but this time the design is a little more traditional, showing all the leads arranged around the neon title treatment. This time the blue and red that demarcate the two eras of the story blend together, with characters from each one similarly moving between both.

TV spots like this began running in early October, selling the film as more of a time-twisted murder mystery than anything else, a message that’s delivered within Wright’s visuals.

Unsurprisingly given the focus his films have on music, Wright created a Spotify playlist of era-appropriate songs to help set the tone.

Costumes from the movie were on display at Universal Citywalk in Los Angeles.

AMC Artisan Films released a featurette with Wright talking about the story and characters as well as what inspired him to go down a slightly darker road than he has in the past.

A Snapchat AR lens allowed users to transform their surroundings into 1960s London.

Discover the mind-bending world of #LastNightInSoho with our new lens on Snapchat.

Use the QR code or visit https://t.co/pMk8Qdlyzj to explore. pic.twitter.com/Ud1GIUnrYg

McKenzie and Taylor-Joy participated in a joint interview where they talked about their careers to date, working with Wright (including what movies he suggested they watch to help understand what he was going for) and more.

Two clips, one showing Sandie angling for her break as a singer and one showing Eloise entering her new apartment for the first time, came out last week.

A red-carpet screening of the film was held just days before release at the new Academy Museum’s, the first premiere to be held there since it opened. At about the same time it screened at Beyond Fest.

Dolby released an exclusive poster designed very much to mimic the kinds of 1960s psychological thrillers Wright and others have cited as inspiration. The company also put out a featurette with Wright talking about his love of seeing movies on the big screen as well as the making of this film.

Check out the exclusive Dolby poster for #LastNightInSoho. Make sure to see the film in @Dolby Cinema at @AMCTheatres for one week only.

An interview with costume designer Odile Dicks-Mireaux had her talking about creating the fashion of the 60s.

In the introduction above I noted that the campaign has been somewhat light on story details. That’s true, but it’s likely because it’s such a plot-heavy story that revealing too many details would spoil the film for those looking forward to heading to the theater.

A heavy percentage of that group is going to be made up of people who are on board with most anything Wright does, appreciating the director’s knack for beat-driven staging and unique visuals. In addition to plenty of time given to McKenzie and especially Taylor-Joy in the marketing, Wright is really the star of the campaign, having one of those reputations like Wes Anderson or Christopher Nolan where he becomes the franchise, even if the movie being made isn’t already part of one.

Adding to that as well as the festival buzz that’s accumulated, the movie arrives with whole-hearted endorsements from many of today’s top filmmakers including Rian Johnson, J.J. Abrams and others. Even Stephen King has given it his thumbs up. That gives it some impressive momentum, even if tracking projections estimate an opening weekend box-office of just around $5 million.