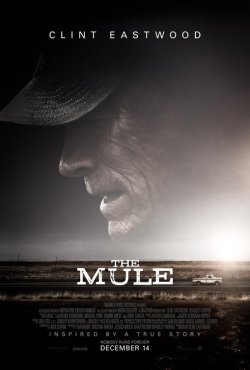 Director Clint Eastwood is back in theaters with the new movie The Mule. Based on a true story originally published as a story in The New York Times, the focus is on Earl Stone (Eastwood), a retired WWII vet who becomes involved with a Mexican drug cartel, transporting their merchandise into and through the U.S.

His activities put him on the radar of the DEA, who seek to not only arrest him but use him as a way to bring down the cartel as a whole. But he’s not doing it because he’s a hardened drug dealer, just because he wants to leave something behind for the family he wasn’t there for in the past.

Eastwood’s face dominates the movie’s only poster, hovering over the highway where we see his truck cruising down the road. Other than the note that it’s “Inspired by a true story” there’s no copy here that explains what the movie is about or what that story is, so Warner Bros. is obviously hoping the face of the actor/director will be enough to inspire people to check the movie out. Either that or it couldn’t figure out anything new to say.

The first trailer, which came out shortly after the announcement of a release date, introduces us to Earl as he’s in the middle of a potentially dangerous encounter with a police officer while in the middle of a drug run. As we shift into a montage of clips that come largely without dialogue, Earl narrates an explanation of how he wanted to do something that would in some way make up for the failure he was to his family, even if it is dangerous work he’s doing. Amidst that we see a group of what are presumably federal agents who seem to be closing in on him and those he works for. It ends by setting up a conclusion that may not work out well for Earl and those he cares about.

Nothing I’ve come across, though it may be that WB has run some targeted ads in the markets getting the movie early.

Speculation had run rampant for a while about whether or not the movie would make it in time to be considered for the 2018 awards season. That was put to rest in late September when Warner Bros. announced its mid-December release date.

His role in the movie was part of a short interview with Pena about his tendency to play drug enforcement characters.

The New York Times journalist whose story inspired the movie wrote a remembrance of how he discovered the story and how it feels to see it on the big screen.

A video for an original song from Toby Keith was released just a couple weeks ago that featured scenes from the movie.

At the movie’s premiere the cast spoke about the process of working with Eastwood while the director shared what it was that drew him into the project. He was also interviewed about the unusual nature of the story and how it got on his radar.

I mean…alright. This seems to fit in with Eastwood’s late career theme of playing cranky old guys who won’t let go of the past while at the same time seeking to make amends with the family they’ve neglected over the years.

What’s kind of surprising is that this is all there is. It may be, especially given the late date at which the movie was finally put on the release calendar, that WB is looking to make as small a deal about it as possible. That’s reinforced by the lack of early reviews and the overall small publicity push it received.

Eastwood’s daughter Alison spoke about her decision to return to acting, particularly with her father.

Warner Bros. released a featurette including Eastwood talking about the story and his long-lived career.

There was an interview with jazz musician Arturo Sandoval, who created the score for the movie. 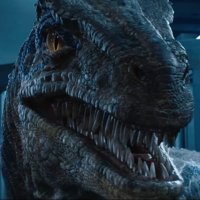 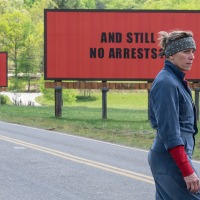