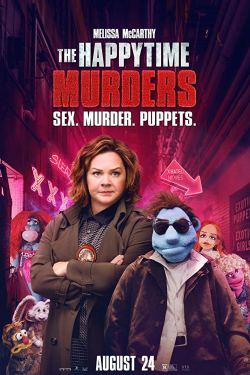 The marketing for The Happytime Murders, which tells the story of puppets and humans living together and working together to solve crimes, is recapped at The Hollywood Reporter. Suffice it to say this does not look great.

There’s not much going on over at the movie’s official website, which just offers the basics including a “Trailer,” the “Story” and the ability to get tickets. There were also links to the movie’s Instagram, Facebook and Twitter profiles.

After the first trailer and poster were released STX was sued by Sesame Workshop, the owners of the “Sesame Street” brand, over the tagline “No sesame. All street,” which they claimed infringed on their trademark. The studio responded by pointing out that Brian Henson – Jim Henson’s son – is involved with the movie and a division of The Jim Henson Company is among the movie’s producers, which may not be a solid legal argument but is mainly aimed at attaching some corporate goodwill to the film. A judge quickly ruled in favor of STX.

Last week, writer Todd Berger finally addressed the elephant in the room, talking about how he was indeed inspired by Meet the Feebles, Peter Jackson’s cult hit from years and years ago that mined similar territory.