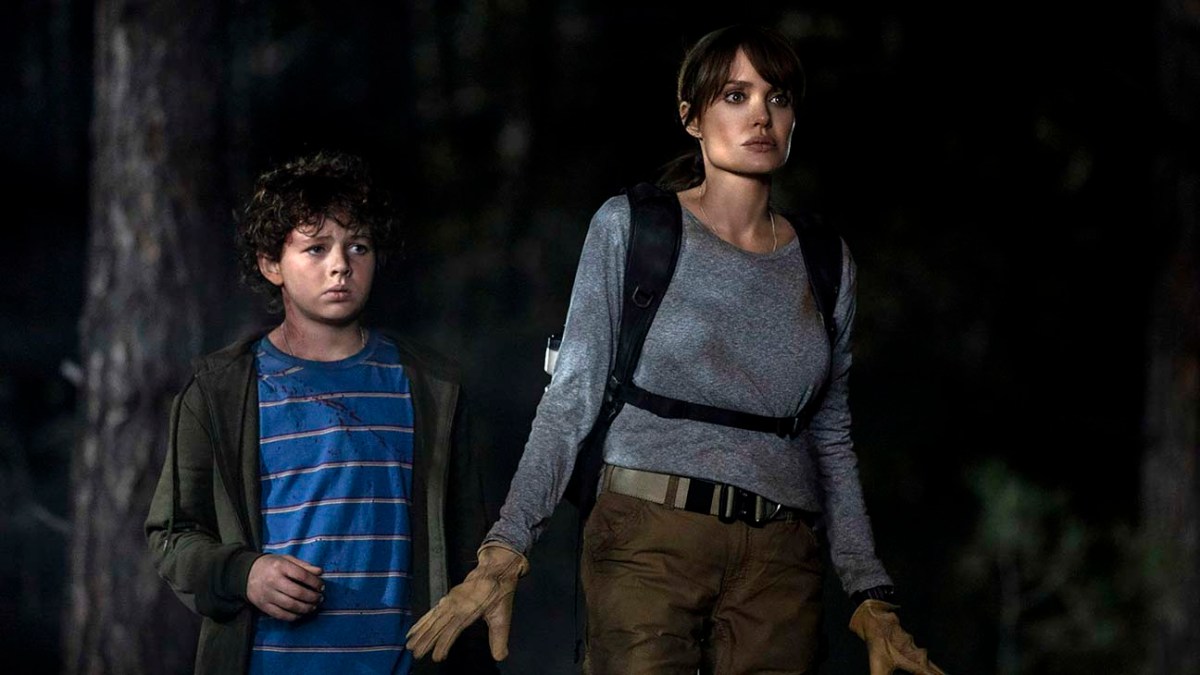 How Warner Bros. is selling a drama of a young man and fire.

Based on the novel of the same name by Michael Koryta, Those Who Wish Me Dead stars Angelina Jolie as Hannah Faber, a former smokejumper in the forests of Montana. Faber is haunted by the memories of an earlier forest fire that went very badly for the rest of her team. One day while keeping watch she comes across Conner (Finn Little), a young boy who seems to be on the run from something. Turns out he’s being pursued by two hitmen who have just killed his father and who are so desperate to tie up loose ends they will set a forest fire to flush out Faber and the boy.

The movie, directed by Taylor Sheridan, has a decent 71% Fresh on Rotten Tomatoes and arrives this week in theaters and on HBO Max preceded by a campaign that has emphasized the drama of evading fire but not so much on the story or characters themselves.

The faces of Faber and Conner are the primary elements on the one poster (by marketing agency The Refinery) that came out in April. Both are, of course, bathed in the red light of the fire they are on the run from and both look weary and stressed from that effort. There’s no copy about the story here, and while Sheridan isn’t name-checked exactly a couple of his previous popular credits are called out at the top.

Hannah is working a fire-watching tower and still reeling from the mistakes she made years ago as the first trailer (8.8 million views on YouTube), released in early April, begins. One day she encounters a young boy who, she finds, is on the run from some dangerous people who have already killed his father. Those bad men start a forest fire to flush Hannah and the boy out, meaning she not only has to keep the kid safe but deal with the trauma of her own past at the same time.

Not much information on the movie’s official website, just the trailer, a brief synopsis and information on either buying tickets or subscribing to HBO Max.

One of the first, albeit very brief, looks at the movie came via an HBO Max promo touting the same day theatrical/streaming availability of WB’s 2021 lineup.

Warner Bros. announced the May release date in February.

An interview with Jolie and others included a first look still from the film.

Fandango’s MovieClips got an exclusive clip in early May showing a key dramatic moment with Hannah trying to save her young charge from an encroaching fire.

A short featurette came out around the same time with Jolie and other members of the cast and crew discussing the themes of the story and what it was like to shoot the film in some extreme conditions.

Cutdown versions of the trailer – usually around 10 or 15 seconds – were used as TV spots as well as online, including as pre-roll ads on YouTube.

Angelina Jolie will stop at nothing. Get tickets now and see #ThoseWhoWishMeDeadMovie in theaters and streaming exclusively on @HBOMax this Friday! pic.twitter.com/7cozP3N6kc

The key art was modified and reused for online ads that included a link to the HBO Max website where people could sign up.

HBO Max released an exclusive “first look” clip featuring a key moment of Faber figuring out why Conner is being pursued and by whom just days before the movie came out.

On the one hand, there’s a lot of drama that’s created in the campaign. We get the tension inherent in the flight of the two main characters from both the hitmen and the fire they start to either kill or find their quarry. And Sheridan has proven himself as a solid director of emotional stories about characters whose future we care about.

On the other, the trailer and other assets don’t give us a lot of opportunity to actually experience any empathy for those characters. There’s not a lot of detail regarding the story and the trailer in particular is somewhat unclear as to what’s happening. Not only that but given the human cost of forest fires over the last few years it’s hard to see that fire without recalling some very recent stories from the real world.

Still, it’s not unreasonable to overlook a few quibbles and give the benefit of the doubt to the campaign, given the talent involved.

After receiving critical and commercial acclaim for writing last year’s Hell or High Water, Taylor Sheridan makes his feature directorial debut with the noir thriller Wind River. A murder mystery set in the bitter winter of the Wyoming wilderness, the story is put in motion when US Fish and Wildlife Service agent Cory Lambert (Jeremy Renner) discovers a young girl from town has been killed.

The FBI gets involved in the investigation, sending agent Jane Banner (Elizabeth Olsen) on what turns out to be her first case. She enlists the skills of Lambert not only to track and find the killer but also navigate the insular politics of the town. See residents there don’t much care for outsiders but do like their secrets. So the pair finds that uncovering the past of the murdered girl isn’t as easy as they hoped. Not only that, but some people seem to be actively working against them.

The first poster shows Renner, with only his face and the rifle he’s holding visible as he’s wearing a white suit that camouflages him in the snowy background. Scenes of the story’s setting are visible in the transparent title treatment while at the top we’re told “Danger comes with the territory.” That’s a bit of a generic tagline, but I’m guessing they were meaning to allude to something like Native American “territory” with the terminology.

The same line “Danger comes with the territory” is used on the second poster but there’s also the copy “Nothing is harder to track than the truth,” which offers at least a bit more hints at the story. This one positions Renner and Olsen on opposite sides of the image, separated by a shot of a man walking out through the snow, gun in hand like he’s tracking someone or something. Still setting up a noir-ish thriller here, which is cool.

The first trailer starts out with someone, it’s not clear who, on the run across a frozen lake. Her body is discovered by Lambert and we’re told we’re in a remote area before Banner from the FBI shows up. She enlists his help because of his experience and knowledge of the area, by their efforts are frustrated by locals who aren’t eager to help. The drama and music build to the ending.

It’s a good first effort, setting up a tense drama set in a tight-knit world of secrets and survival. It reminds me of Winter’s Bone more than a little. Renner and Olsen look like they turn in tight, emotional performances.

Another trailer, labeled a “review” trailer, continues to sell this as a story of a murder mystery in a small town that tightly protects its secrets. There are a few more plot details that are shared here that weren’t in earlier trailers but the main appeal here comes from the quotes pulled from early reviews that praise the acting, direction and other aspects of the story. It’s all very tense and pulse-pounding.

There’s no official website I’ve been able to find, nor is there any shared in the trailers or other materials. That means the only online presence for the movie is the collection of Facebook, Twitter and Instagram profiles where The Weinstein Co. has been sharing videos, links to news stories and photos.

A series of TV spots like this one emphasized various aspects of the story, from the remoteness of the location to the secrets of the town to the hunt for the mysterious killer. Most all of them include that it comes from the creators of Hell or High Water, though, taking advantage of that movie’s good reputation from last year.

I’m not aware of any online or social advertising that was done, nor have I seen any artwork that’s been used for outdoor billboards or other signage.

The first bit of publicity came when it was announced the movie would have its official premiere at Sundance 2017. The first look at the movie came around that same time. Just before that debut, the movie was dropped by The Weinstein Company, which had picked it up back around the time of Cannes. The screening at Sundance resulted in plenty of positive word-of-mouth, though. 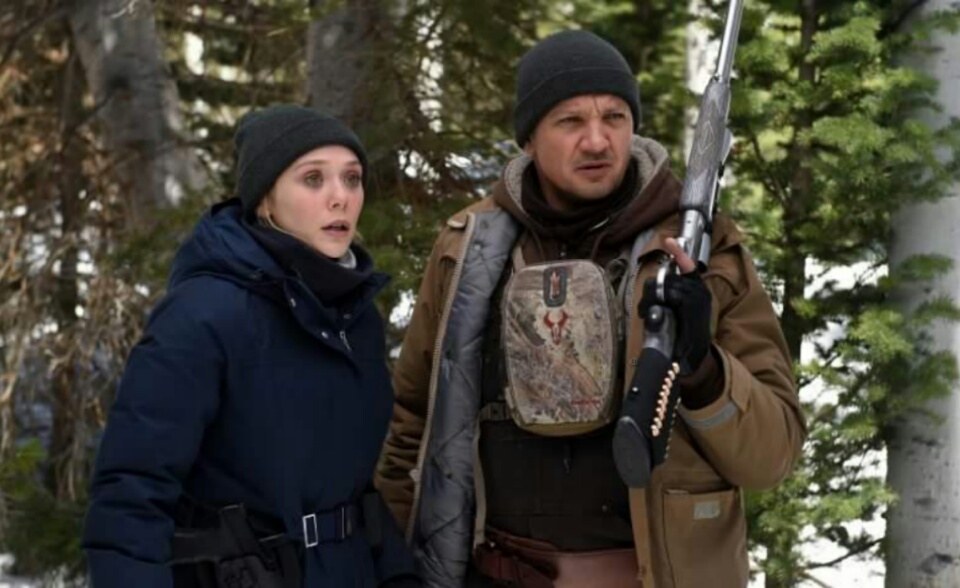 It later screened at the Karlovy Vary Film Festival where Renner had nothing but praise for first-time director Sheridan and shared his enthusiasm to work with him again. That praise was echoed by Olsen at the movie’s premiere. Sheridan himself talked about how directing was something he approached only after feeling comfortable as a writer. Renner also got a profile all to himself where he talked about his personal life, his career to date and more.

Other press involving both Olsen and Renner also included hefty doses of mentions of their other movies, particularly The Avengers franchise since they’re both involved in that.

The emphasis on Sheridan is clearly meant to take advantage of the positive buzz that came out of last year’s Hell Or High Water, which gained a very good reputation with critics. That’s why all the trailers and posters reference that movie and why so much of the press coverage has focused on Sheridan. Most of the stories have either been about him directly or about the cast’s relationship to him. TWC obviously knows what’s going to get people’s attention and in this case, it’s creating ties between this movie and Sheridan’s most recent success.

Outside of that the campaign works hard to create a noir-like sense of mystery and mostly succeeds on that front. This isn’t The Maltese Falcon, of course, but does play up story elements common to the genre, including the town full of reluctant witnesses with agendas of their own and more. What the audience is being sold is a solid procedural crime story that, with the attachment of stars they like and the creative force behind a recent popular movie, will hopefully spur their interest. It may just be the alternative people who aren’t interested in the rest of this week’s new releases are looking for.

Early 2019 brought details of an arrangement The Weinstein Company made with the Indigenous groups depicted in the movie, a deal that was effectively discarded by the bankruptcy resulting from Harvey Weinstein’s sexual assault and abuse actions.