SIERRA BURGESS IS A LOSER sells an updated Cyrano de Bergerac adaptation that also takes advantage of Netflix’s position as the savior of teen romances. 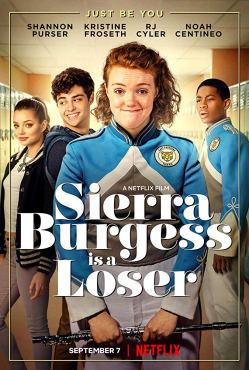 Sierra Burgess (Shannon Purser) is not the most popular girl in school. That title belongs to Veronica (Kristine Froseth). The two are not friends in any regard in the new Netflix original teen romantic comedy Sierra Burgess Is a Loser. Eventually the two do become close.

That comes in handy when a case of mistaken identity means that while Sierra is crushing on Jamey (Noah Centineo), she convinces Veronica to stand in for her for video chats with Jamey as well as in person, all while Sierra is feeding her lines.

All four main characters – the three named above and Sierra’s best friend Dan (RJ Cyler) standing in a high school hallway, Dan and Sierra in marching band uniforms, presumably to communicate that they’re a couple awkward dorks, but that’s engaging in cliches. It’s also somewhat in contrast to the “Just be you” copy at the top.

We meet Sierra in the trailer as she’s talking with the student counselor about her future, at which point we’re offered a whole bunch of adjectives describing her, ending with “loser.” Still, she’s confident and comfortable in who she is. Things change when a cute guy accidentally texts her, believing her number to be Veronica’s. The flirtation continues over text but she gets nervous when he wants to meet in person, striking a deal with Veronica to keep up the charade. Eventually the truth comes out, of course.

Nothing here, though it did get some support on Netflix’s brand channels.

Nope, no paid promotions that I’m aware of.

The movie was acquired by Netflix after it was shot, though no official release date was announced until the trailer hit.

To my recollection this is the first Netflix movie to have a soundtrack tie-in, something star Shannon Purser was promoting as early as late last month.

It was able to ride a couple trends to additional press coverage. Not only is it the latest buzzy Netflix movie to star Centineo but it’s also one of a couple teen romance movies on the streaming platform.

That last point, that it’s riding a wave of interest in Netflix’s revitalization of the romantic comedy genre, is the strongest selling point in the campaign. The trailer is good, but the rest of the marketing is fairly weak and doesn’t make a very strong case for the film.

Of course all that may not matter a whit if it starts to catch on and generates 38 Buzzfeed stories the way other recent releases have. That’s the real key to success these days.

Shannon Purser stopped by “Kimmel” to talk about the movie but, of course, the conversation turned to “Stranger Things” to a great extent.

Netflix has released a lyric music video for “Sunflower,” a song performed by Purser. There was also a video of Purser and the rest of the cast kissing strange things and figuring out what they are.
Another profile of star Shannon Purser, who’s really coming into her own as she gets a couple lead roles and is able to shake her “Stranger Things” legacy a bit more.