Pixar returns with its first non-sequel in three years.

In the last 10 years, Pixar’s output has been dominated by sequels, a stark contrast to the studio’s first 15 years that was made up of solely original stories save for the Toy Story series.

This week Pixar gets back into non-sequel territory with Onward. Set in a world of magic and magical creatures, the story follows two elvish brothers – Ian (Tom Holland) and Barley (Chris Pratt) – who are given a way they can bring their late father back to life for a single day. When the spell goes wrong and only half the body is brought back the two set out on a quest for help so they can spend just a little more time with their dad.

Magic has been the central theme of the campaign, sometimes to the detriment of insights into the story. With little serious competition at the box office, tracking estimates an opening weekend of around $44 million and the movie currently has an 84 percent “Fresh” rating on Rotten Tomatoes, putting it somewhere in the middle of Pixar’s releases.

Two moons hang in the night sky above an imposing mountain range and a brightly lit city on the first poster (by marketing agency Logan Creative Group) from late May, Barley and Ian in the foreground hanging out on the roof of Ian’s van. In case the fantasy world of the story isn’t clear from all that, the audience is told at the bottom the movie “Cometh soon.”

The second poster (by marketing agency Concept Arts), released in August features a denim jacket adorned with all sorts of pins and patches, just the kind of thing a fairy tale character teenager would wear. 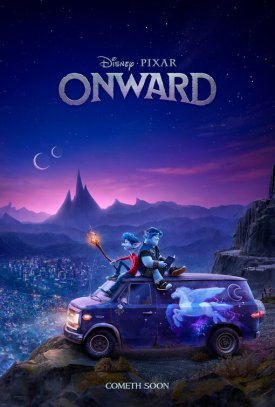 We’re finally given a look at a key part of the story on the third poster (by Logan Creative Group) from October. Ian and Barley, with mountains and unicorns in the background, are standing in the street flanking the half-reanimated body of their father. There’s no explanation as to what’s going on, exactly, but at least it shows there is some sort of problem the brothers are out to fix.

A series of character posters came out in December that show Ian and Barley, their mother Laurel (voiced by Julia Louis-Dreyfus) and others the brothers encounter on their journey. All those were brought together on the theatrical poster that features a number of characters and locations from the story. 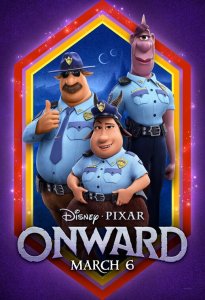 A special poster was released by Disney to celebrate Chinese New Year in January. The design is meant to invoke a tapestry and designed to promote the movie in a more subtle way while mostly being a unique work of art. It was one of several posters in this style put out by Disney on the Chinese social network Weibo for upcoming films.

Ian and Barley are standing on top of their van, which is perched in the crook of the magical staff that’s central to the story on the RealD 3D poster, a nicely minimal design that evokes the fantasy elements of the story even more strongly than some of the other, more overt efforts.

The first trailer (7.3 million views on YouTube) from May introduces us to a world still rooted in magic, with orcs, trolles, elves and other creatures living everyday suburban lives. We meet Barley and his older, less responsible brother Ian as they set out on what the latter has deemed a “quest” while the former wants to think of it as just an “errand,” though one he admits might be a little strange. It’s s nice bit of world establishment with hints about what’s to come in the story.

In October the second trailer (7.3 million views on YouTube) was released, offering a much fuller look at the characters and story. After introducing us to a modern world still inhabited by mythical creatures and dominated by magic, we see Barley and Ian have been given the chance to bring their late father back for one day. The spell doesn’t work as intended, though, and they have to race against the clock to finish the restoration before they miss their chance to see him again.

The next trailer (3.2 million views on YouTube), released in December, covers a lot of the same ground but introduces some new characters and new scenes from when Barley and Ian are already on their quest and getting into trouble.

You get some character descriptions on the movie’s official website but the rest is just the basic marketing content.

A recreation of the van driven by Ian and Barley – named Guinevere – was brought to Disney’s D23 Fan Expo in August of last year. Holland and Pratt also appeared on stage at the event to speak about the film, though Holland also addressed the split between Marvel and Sony that left Spider-Man’s future in the MCU up in the air.

Shortly after the second trailer came out, Disney released a video of Pratt and Holland watching and reacting to it, an attempt to tap into the kind of reaction videos created by fans and shared on YouTube.

The movie is one of many Disney brought to CCXP in December, with the cast and crew appearing on a panel there to show off footage and talk about the story.

A commercial released in late December eschews most all of the story, instead offering an extended look at Barley and Ian trying to use magic to deal with their van being out of gas. A similar approach is taken in a second spot that has them trying to walk across a ravine on an invisible bridge. Another commercial laid out the basic plot of the brothers going on an time-sensitive adventure to save their father.

At the end of January the movie was included on the list of screenings – out of competition – at the Berlin Film Festival in February.

The characters and story were introduced in a featurette released in early February that emphasized how it continues Pixar’s tradition of funny and emotional storytelling.

News came in mid-February that Brandi Carlisle was recording the end-credits theme song for the movie. The lyric video for that song, “Carried Me With You” came out later in the month.

The cast and crew attended the Hollywood premiere in mid-February, an event Disney livestreamed. They also appeared at the UK premiere shortly after that.

Later in February the first clip was released that showed Ian instructing Barley on proper spell-casting technique, though that goes a bit sideways.

TV advertising began about that same time with spots that sold the movie as a fun and magical adventure, putting the story aside to focus on the humor of the two brothers getting into all kinds of hijinks together.

Pratt and Holland along with others from the cast appeared in a short featurette that had them all explaining the premise of the story as well as how it goes wrong and what they need to do to fix it.

DisneyPixar used the bonus of Leap Day to hold advance screenings at select locations to attempt to build word of mouth leading up to opening day. The studio also held a sweepstakes that day to win a “birthday surprise.”

Earlier this week news broke that the movie would hit theaters with a new “The Simpsons” short, “Playdate with Destiny.” The combination of Pixar and “The Simpsons” might seem like an odd one but both hold a prominent place on the Disney+ streaming service. It’s largely a way to raise the profile of the long-running show among audiences that might be too young to have a nostalgic connection to it.

Additional featurettes came from AMC Theaters, which put out a couple interviews with the stars. Pixar also put out another special look that had the three primary cast members talking about the story and more. Audiences were encouraged to see it on the big big screen in a promo video from IMAX.

Final TV spots from Pixar reminded people the movie was coming out immediately, including a commercial that featured footage from the red carpet premiere.

A set of stills was released at the same time the first trailer came out in early June. A little later Holland and Pratt were interviewed along with Dreyfuss, talking about the bond they formed during production.

There was a bit of controversy in January when an artist sued Disney over the design of the van, saying the studio copied her work without permission.

An appearance by Pratt on “Jimmy Kimmel Live” was crashed by Holland, who stopped by to give his costar a hard time.

The technical design team was interviewed about the process behind creating the visuals, including the rules they held to regarding magic spells.

At the movie’s Hollywood premiere Pratt and Holland along with the rest of the cast talked about working together on the film and what attracted them to the story.

An interview with cinematographer Sharon Calahan had her talking about how she and the other filmmakers tapped into action movies like Atomic Blonde and John Wick to choreograph some of the movie’s key sequences. The movie’s design team was also interviewed about how they put together the look and feel of the magical world.

One final joint interview with Holland and Pratt focused how they worked together and the emotional core of the movie’s story.

DisneyPixar has created a strong magic-themed brand for the movie that’s been communicated through all the trailers and posters as well as in promotions on social media and elsewhere. That aspect of the campaign has been fun and relatively lighthearted, showing the characters engaged in lots of fantastic adventures on their quest.

Only occasionally is the purpose of that quest actually shared with audiences, which indicates there may be more faith in that aspect of the movie to generate interest as opposed to the story about seeking closure with a deceased parent.

What will be key to the movie’s box office fate is how the last week’s developments regarding the Covid-19 coronavirus impacts people’s willingness to mass with lots of others in a theater for two hours. With reported cases on the rise in Washington state and elsewhere and companies cancelling or pulling out of events, it might be that the public is just not feeling overly social at the moment. More than that, it’s possible the movie’s level of success this weekend could be an indicator of how things will play out over the next several weeks.

Encountered this online ad from Ashley’s promoting its tie in with the movie.