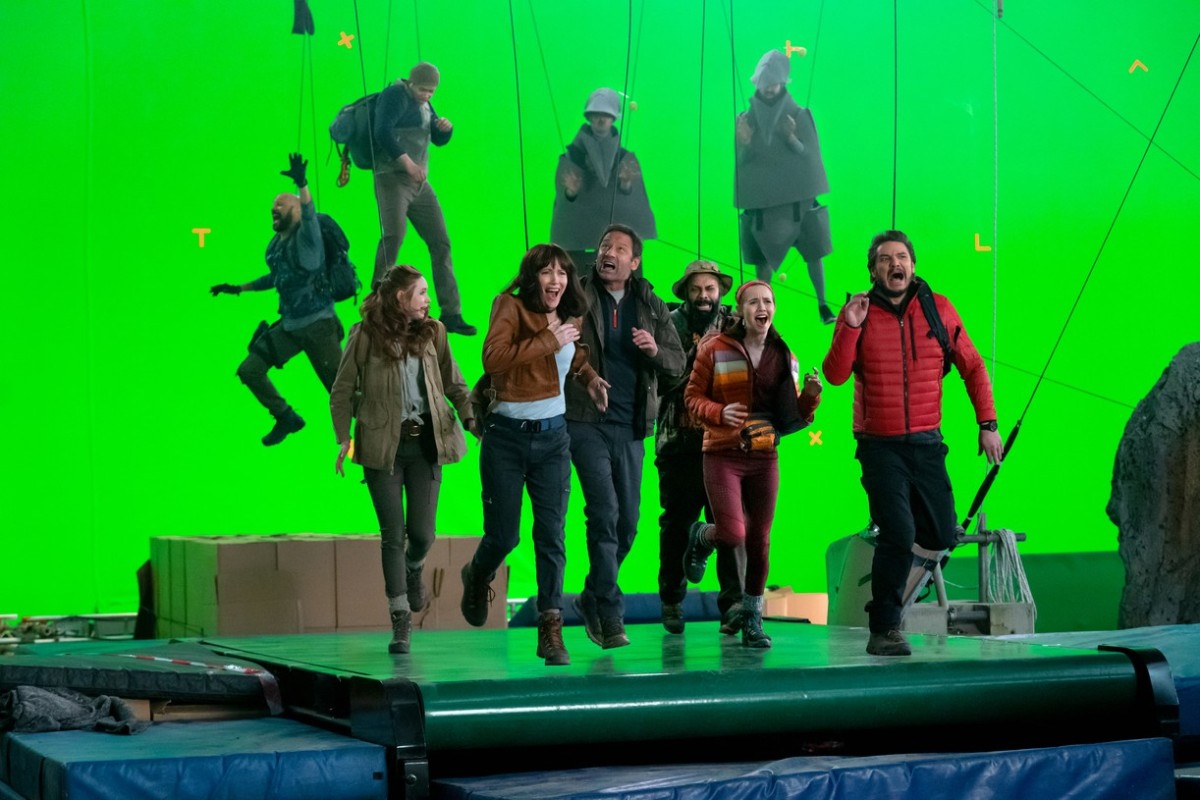 How Netflix is selling a meta comedy about Hollywood in times of pandemic.

There have been a handful of movies over the last year or so that have, in one way or another, been about or at least set in the world of a pandemic. But The Bubble, new this week on Netflix, offers a new take on the idea, one that mixes quarantine reality with Hollywood’s love affair with making movies about itself.

Directed by Judd Apatow, who cowrote the script with Pam Brady, the movie follows the cast of the fictional Cliff Beasts 6 as they shoot the franchise sequel during the Covid-19 pandemic. Karen Gillan, David Duchovny, Leslie Mann, Keegan-Michael Key and others star as Cliff Beasts series veteran actors. They’re joined by newcomers played by Iris Apatow and Pedro Pascal, with Fred Armisen as the film’s director and Kate McKinnon as the studio head overseeing a logistically difficult production.

With that premise, let’s take a look at the very meta campaign Netflix has rolled out over the last month or so.

Netflix announced the film in November, 2020, as the real-life pandemic was still sweeping through the country and world. Apatow was set to direct as well as write with Brady.

Most of the primary cast, including Gillan, Key, Mann, Pascal and others was announced in February, 2021.

the marketing campaign for CLIFF BEA6TS

Things kicked off in early March with an appropriately meta touch, one that left more than a few people scratching their heads as we tried to figure out what was going on. Causing the confusion was the teaser trailer for Cliff Beasts 6: The Battle For Everest. What’s most impressive about this teaser is that it 100% looks like something that would actually be made for a long-in-the-tooth action franchise, with pulse-pounding music, a few flashy graphics and, most impressively, the fact that the title is actually represented as “CLIFF BEA6TS”, with that “6” making no sense whatsoever.

That was followed by a completely serious featurette explaining the story to date in the Cliff Beasts franchise, including interviews with the cast, posters for the earlier movies and the usual kind of self-congratulatory comments about how everyone worked together mixed with promises of even more action and adventure to come.

Along those same lines came a retrospective that included comments from the cast about returning to the series, who their characters are and other very familiar material.

All of that took place in just a couple days, all leading up to the launch of the campaign for the *actual* movie, not the movie-within-a-movie.

Later on there was a behind-the-scenes video released that shows the director of Cliff Beasts trying to coax performances from the actors with sometimes confusing, sometimes contradictory and always insane suggestions. Another similar video shows just what you get when you hire a Sundance-winning director to helm a big-budget special effects blockbuster.

the marketing campaign for THE BUBBLE

The first trailer (500,000 YouTube views) for The Bubble starts out with footage from Cliff Beasts, only to then transition to show the ridiculous green screen nature of shooting movies like that, including extras in foam outfits as placeholders for the digital monsters added later. We see that the cast and crew have been sequestered for the duration of the production, with PPE and Covid tests and everything we’ve come to expect over the last two years. Even with that aside the set is filled with insanity, whether it’s people coming down with the flu, doing too much cocaine, hooking up with each other or rolling their eyes at some of their costars.

The disconnect between reality and fantasy is also highlighted on the poster, which has the cast arrayed in the usual heroic V formation, but with the green screen not filled in, so we see the wires and backdrops and all the other stuff we’re not supposed to.

A clip shows an extended look at one sequence from the production, with a dramatic moment in Cliff Beasts giving way to the green screen reality of filming.

No Apatow children were harmed in the making of THE BUBBLE. Two weeks until you see for yourself! pic.twitter.com/iQFwfj7IYK

Netflix offered everyone an explanation of what was going on in a video that also had recommendations on what else members of the movie’s cast have been in that people could watch.

What’s most amazing about this campaign is that, with the exception of one or two videos, it encompasses a total of under 72 hours. Most all of those initial videos for the Cliff Beasts movie came out over a single two-day period, while the trailer and poster for the actual movie came out in a single day.

That aside, there’s a lot of fun in what’s presented here, especially when you consider it’s inspired by the real life situation encountered by the Jurassic World: Dominion filmmakers. But it’s also more of a broad comedy than what we’re used to seeing from Apatow, who usually deals in headier, or at least more subtle, fare.

The marketing of WELCOME TO MARWEN.

Steve Carell stars in this week’s Welcome to Marwen, the new movie from director Robert Zemeckis. Based on a true story, Carell plays Mark Hogancamp, an artist who one day experiences a violent attack by a bunch of ignorant rednecks in a bar and suffers injuries requiring surgery and later physical therapy.

The attack also leaves Mark with few memories of his pre-attack life. To try and regain those memories Mark channels his artistic tendencies into creating a miniature town named Marwen. Populating the town are figures representing himself as well as the various women in his life, including his new neighbor Nicol (Leslie Mann). The fantastic stories he concocts for these characters channel his feelings, which come to a climax when he’s asked to testify against those who beat him.

Hoagie, Mark’s figurine alter-ego, is shown on the first poster but nothing else about the story is shared. Instead the main value proposition offered here is that the movie comes from the director of Forrest Gump and that he’s inviting you “to a most unexpected place.”

A series of posters uses the action figure incarnations of each character to introduce them to the audience, offering their name and their status in the story as as “The new recruit,” The leader” and so on. 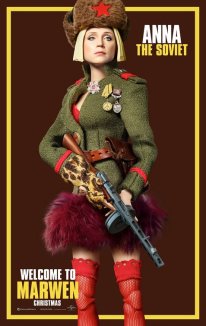 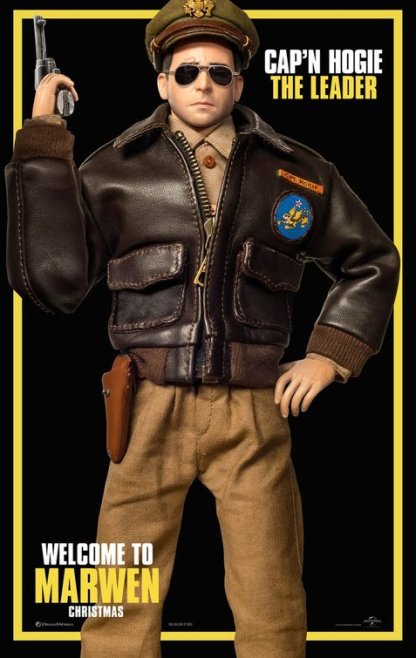 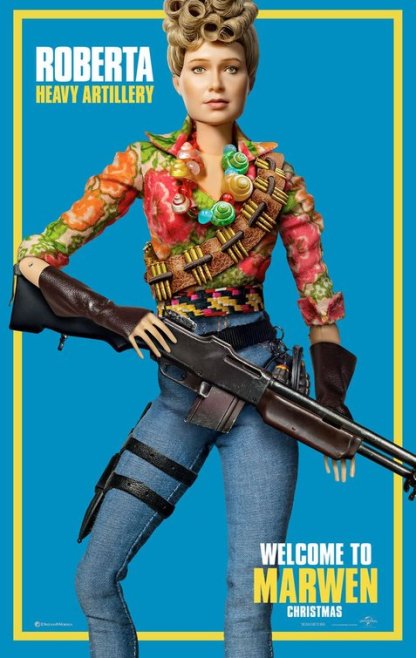 The final theatrical poster puts Mark and Hoagie next to each other on adjoining seats, the audience being told that “You can’t put this hero in a box.”

The trailer gives us a good look at the fantastical world created by Mark. It follows him as we hear about who he is – a well-respected artist – and see him meet the lovely new neighbor from across the street. When he’s jumped by a gang of Nazis, his injuries limit how much he can do so he finds inspiration to go on from the characters in the art he makes, including the determination to testify against his attackers.

It shows a movie where reality and fantasy are going to bleed into one another but features what looks to be a strong performance from Carell and yet another tragic underuse of Mann.

The second trailer focuses more firmly on how Mark was attacked and how his injuries left him with no memories of his life before, meaning he lives out the stories in his head through the figures he’s created. He explains how every one of them represents someone from his life and are part of his healing process.

It’s a much stronger trailer because it’s more clearly about the story of Mark dealing with the repercussions of what’s happened to him, without getting too bogged down in the relationship with Nicol.

After introducing us to the main characters that live in Mark’s stories, the third and final trailer offers the same explanation of the story we’ve seen before, but with a slightly stronger emphasis on how he’s created this fantasy world to deal with being the victim of a hate crime.

An augmented reality experience was promoted, offering users the chance to not only view 360-degree versions of a scene from the movie but put themselves in that scene and share pictures elsewhere online.

The movie was part of the CineEurope presentation from the studio. Carell was named as a host for a mid-November episode of “Saturday Night Live” to help promote the movie closer to release.

Things were pretty dark on the promotional front until the movie’s red carpet premiere a couple weeks prior to release, where the cast and crew talked about the true story and the process of creating the world of the film.

Mann stopped by “The Late Show” to talk about the movie and everything else, with Kruger appearing there a couple days later. Other members of the cast, including Janelle Monae, did their own media rounds, as did Zemeckis himself. Carell also did “The Late Show” to chat with his old buddy Colbert.

A short featurette released just before the movie came out included Zemeckis talking about the inspiring true story and more. A bunch of clips offered expanded looks at scenes glimpsed in the trailers.

The release of the movie also brought new attention to the documentary that tells Hogancamp’s story and which is available to stream or download on a few platforms.

For a movie that seems to be so focused on emotions there’s an odd coldness to the campaign. It’s so concerned with the idea of watching Mark’s figures act out his stories that it doesn’t offer audiences much in the way of empathy toward what he as a person is actually going through.

It makes sense as those sequences are interesting and, most importantly, part of Zemeckis’ brand that’s focused on innovative visual effects. But the campaign fails to connect those visuals to anything meaningful no matter how many times we see Carell struggling.

Kruger was interviewed about the movie and the roles she’s tired of taking. 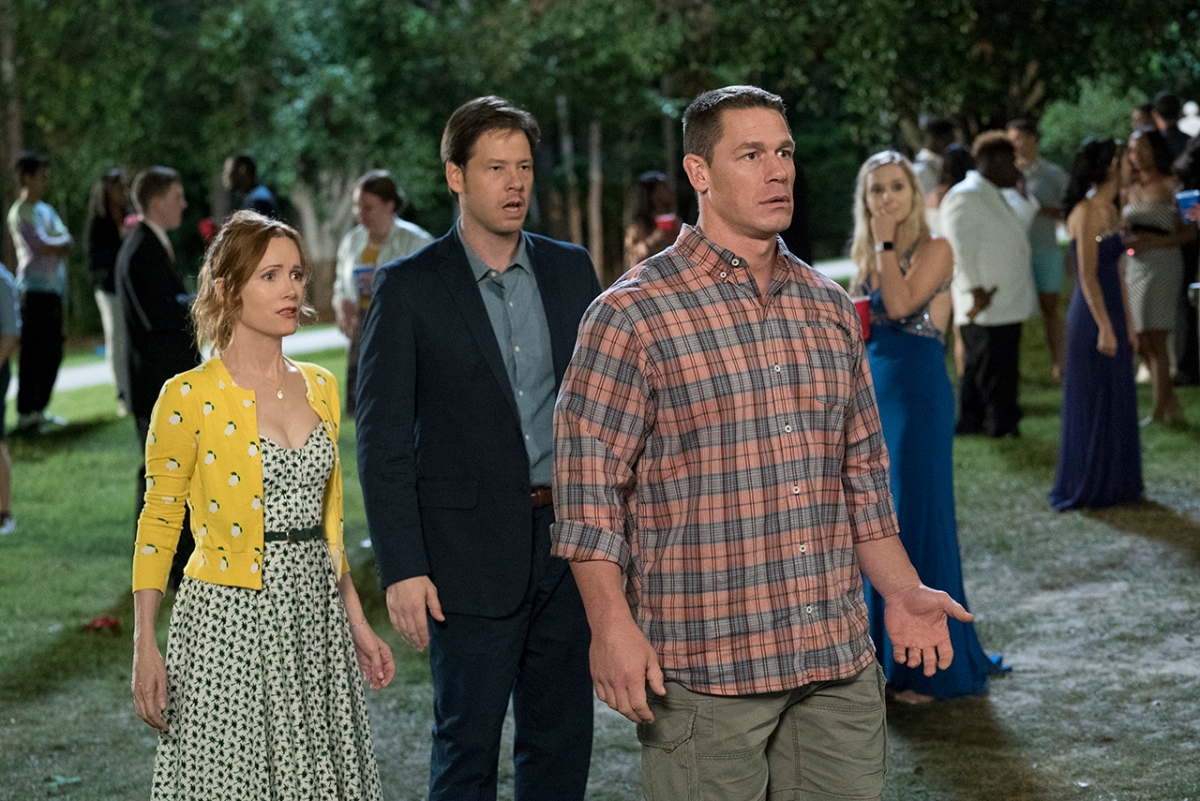 John Cena, Leslie Mann and Ike Barinholtz play the parents of a group of teenage girls in the new movie Blockers. Their daughters are all friends and are all making plans for prom. Those plans, the parents discover, involves a pact to all lose their virginity to their dates. The parents are understandably upset by this revelation, believing for various reasons that the girls aren’t ready for such a milestone.

So they set out to track the group down and upset the evening. Of course things don’t go nearly as smoothly as they hope as the trio of adults gets into all sorts of trouble, unable to find their daughters even when they get close. Still, they remain determined to put themselves between their daughters and the boys they’re dating. The movie is the first directorial effort from Kay Cannon, who previously has written the Pitch Perfect movies.