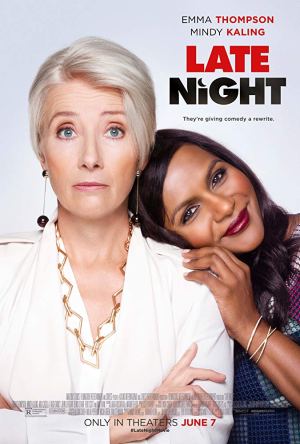 Mindy Kaling has emerged as one of the most interesting and original comedic voices of the last 10 years, coming to national attention on “The Office” and continuing that momentum with a show of her own and other ventures. This week’s Late Night both stars Kaling along with Emma Thompson and was written by her.

Kaling stars as Molly, an aspiring comedy writer who joins the staff of a late night talk show hosted by Katherine Newbury (Thompson). Katherine’s show has been struggling as she’s seen as no longer funny while also facing criticism she fails to support other creative women. To freshen up the show and counter some of that negative press she hires the relatively inexperienced Molly, who brings a burst of energy that’s positive for both their careers.

Molly is resting her head on Katherine’s shoulder on the first poster, which communicates “They’re giving comedy a rewrite.” It’s simple but establishes that the dynamic between the two is the primary draw and that the movie will be set in the world of comedy.

Katherine runs a tough office, we see in the first trailer from March, firing writers and others on a whim if they displease her in the slightest. When Molly joins the staff she provides just the kind of creative jolt Katherine needs as she’s on the brink of cancelation. Molly’s position is questioned by others, but you can’t argue with success and Katherine finds she needs Molly to keep things going as the young writer is just the kind of energy the show has been missing.

The second trailer introduces us to Katherine as the only woman in late night TV, a position that’s currently tenuous, leading her to hire a woman as a writer on the show. Molly needs to prove herself in the office to be taken seriously and, encouraged by Katherine’s newfound desire to remain relevant and successful, starts letting her creative voice be heard and pushing Katherine to try new things.

While the official website for the movie doesn’t feature a ton of actual information – though the “Synopsis” is better written than most – it does sport a more interesting design. Scroll down the page past the trailers and sections offer a bit more on both Molly and Katherine, including GIFs for each that can be shared on various social networks.

Banner and other online ads used the key art image of Molly and Katherine together, including the tagline and a link to buy tickets.

Some TV advertising was done, but Amazon Studios hasn’t put any of those spots on its YouTube channel. Pre-roll ads on YouTube contained similar videos and pushed people to buy tickets.

A first look still from the movie was released at the same time it was announced it would be screening at the 2019 Sundance Film Festival. While there Kaling talked about how the movie was latest opportunity she had created for herself, not waiting for others to give one to her. Amazon picked the movie up shortly after the premiere for a reported $13 million.

Kaling announced the release date in a fun little video at the end of February. She was interviewed later on about how being a “diversity hire” earlier in her career inspired her to tell this story.

The movie was scheduled as the closing night feature at the Toronto LGBT Festival.

Back in May Thompson appeared on both “Jimmy Kimmel Live” and “Saturday Night Live.” She was also the subject of a profile that covered not only this movie but others as well as her attitude in general and whole career to date.

A video released by Amazon in late May had Kailing and Thompson reading “nice tweets” about themselves, a more upbeat twist on a recurring bit seen on “The Tonight Show.”

The first clip featured a scene shown briefly in the trailer of Molly jumping in with an answer when Katherine is asked what it’s like working with the young writer. Another clip hosted exclusively by Vanity Fair showed the scene of male writers failing to impress Katherine with their ideas. A bevy of additional clips showing Katherine’s abrasive nature, Molly getting some harsh advice and more. Fandango got an exclusive clip of Molly interviewing for the job while EW

Kaling spoke more, as did director Nisha Ganatra, about how she’s often acted as the first through the door for women and people of color in her career. She also admitted to taking the ill-advised step of writing the part of Katherine specifically for Thompson before she’d ever met her or approached her about the role.

While the campaign Amazon has mounted has been exceedingly pleasant and funny, it’s hard to imagine a scenario where this movie meets a box-office fate significantly different from that of Long Shot, Booksmart and other funny, original films of late. It’s not an event the way this week’s Dark Phoenix is, nor is it a family-friendly alternative like Secret Life of Pets 2. Instead it’s a mid-range comedy with a couple familiar faces that is easily passed on until it comes to Amazon Prime in a few months.

That’s not the fault of the team behind the marketing. Putting Kaling out in front on the campaign, particularly when it comes to the publicity and media, is a great call since she has a fanbase built up over years on TV and is the driving creative force behind the film. But that focus on an individual talent isn’t likely to be enough to counter the power currently enjoyed by franchises, around which the entire theatrical system is now built.

I neglected to include this substantial profile of Kaling where she discusses the movie and how she’s shaped her career so far. She also commented on the difficulties in making the film as well as the more broad way Amazon wanted to initially market it.

Thompson appeared on “The Late Show” to discuss how she approached the role. Kaling also showed up there to talk about how she interviewed Colbert’s female staffers as part of her research while writing the movie.

A featurette released by Amazon focused on the role of women in comedy and how Molly fits into that world. Another covered the process of recreating a late night show’s writer’s room.

Another trailer came out after the movie had been in theaters for two weeks that hit most of the same beats as early spots but added some positive audience reactions to the footage shown. 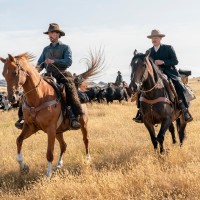 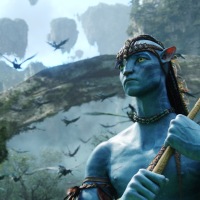