Janet (Kristin Scott Thomas) wants to celebrate some encouraging professional news by throwing a party for family and friends in the new film from writer/director Sally Potter The Party. Joining her and her husband Bill (Timothy Spall) are friends like April (Patricia Clarkson), Martha (Cherry Jones), Jinny (Emily Mortimer) and Tom (Cillian Murphy).

With so many people brought together, even if it is for positive news, there’s bound to be drama of some sort and that very much happens here. Over the course of the evening various secrets are revealed and relationships upended. Futures are decided or ruined and oh there’s a gun that makes an appearance as tensions rise and people become more and more upset.

END_OF_DOCUMENT_TOKEN_TO_BE_REPLACED

Winston Churchill is having his moment in the spotlight. His presence was felt, though not seen, in Christopher Nolan’s Dunkirk earlier this year and has appeared in a couple different TV shows recently, including Netflix’s “The Crown.” Now an integral part of Churchill’s life is coming to the big screen as he’s played by Gary Oldman in director Joe Wright’s Darkest Hour.

The movie follows Churchill in the time immediately before and after he becomes Prime Minister of Great Britain. That’s the same time Nazi Germany is rolling across Europe, a fate some in British government wish to avoid by signing a peace treaty. Having seen how Hitler has honored other treaties, Churchill insists on rejecting that approach and instead using the military to stand against encroaching fascism. To do so he’ll have to rally not only the government but the nation.

“Never never never surrender” is the copy on the U.S. one-sheet, with that copy laid over a red-tinted photo of Oldman as Churchill. That’s a powerful message, especially in today’s political climate. The message at the top makes it clear that this comes from the director of Atonement, which should help draw in the fans of that movie. 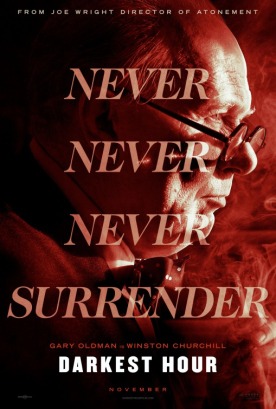 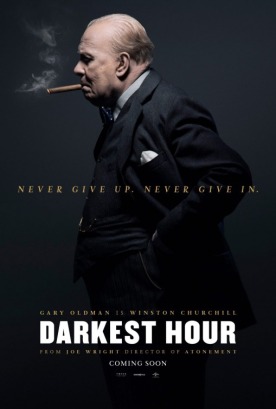 Another handful of posters came later. One proclaimed Churchill as “A man with the heart of a nation” as it showed Oldman in character, his face largely obscured by a huge trail of smoke emanating from his cigar. Another showed only the bottom of his face and used the copy “Never give up. Never give in.” A third showed more of the man himself, with similar copy used. All make sure you know this comes from the director of Atonement.

As the trailer starts we hear how those in power don’t really care for Churchill or his policies or politics. Still, he’s been selected and he immediately inherits a calamitous situation in the war. While those around him are talking peace and negotiations, he pushes for continued resolve to avoid a fate worse than defeat.

It’s all very tense, a feeling that’s aided by the mounting music. These are moments anyone who’s paid attention in high school social studies class should recognize and Oldman brings them to life wonderfully. Wright’s usual cinematic flair is also on display here and that’s a substantial draw.

Another short trailer shows the obstacles, especially those internally, Churchill faced as he assumed power. It’s meant to be very tense, with the tick-tock beat and the constant cutting away from his political machinations and footage from the war he was trying to win.

The primary trailer opens the official website. Close that and you’re taken to a landing page featuring full-screen video clips in the background, promos to buy tickets or subscribe to the Focus Features newsletter as fellas links to the movie’s Facebook, Twitter and Instagram feed.

Scroll down the page and you see the standard Focus site template. Content starts with an “About” synopsis and cast list but then photos, social updates, videos, review quotes and other material is mixed together in the usual style. Many of the behind-the-scenes production photos are presented in black-and-white, giving them the appearance of being historical, or at least showing them in a way that evokes the history being told.

There are a few online ads I’ve seen that have used variations on the key art as well as a handful of social ads that repurposed the trailers. No TV spots appear to have been run, or if they did they’re not being made available online.

The first look at the movie presented an almost-unrecognizable Oldman in character as Churchill. The movie was announced as one of those that would screen at the Toronto International Film Festival as well as at Telluride.

The movie’s appearance at Telluride resulted in generally positive reviews and praise for Oldman’s performance as Churchill, which was pegged as a potential awards contender. While at TIFF, Thomas spoke extensively about the research she did into who Clementine was and the relationship she and her husband had, as well as how the production reignited her desire to work in films again. Both Oldman and Thomas also talked about the intimidation they felt taking on two such powerful historical figures.

In conjunction with some efforts by Focus Features to actively involve them, descendants of the Churchills, as well as experts in the history of the period, endorsed the film as largely accurate, giving it their seal of approval.

Writer/author Anthony McCarten addressed the reality that there’s a wave of Churchill projects in popular culture right now, something he attributed to nostalgia for the days when leaders took decisive and defiant stances, not walking back statements when they turn out to be less popular than intended.

Oldman did some media appearances, as did Thomas, showing up on late night talk shows to promote the movie and engage in hijinks with the hosts. He also continued talking about how difficult the role was physically, both from a makeup point of view and just the effort to embody Churchill and his mannerisms.

There was also a profile of Lily James, who plays Churchill’s loyal secretary in the movie, where she talked about researching the real person, working with Oldman and more. Thomas talked about doing the same sort of research into Clementine Churchill as well as her insistence that the character in the story be just as fully fleshed-out and integral as the woman was in real life. Wright also spoke about the challenges of production, including sometimes showing Churchill to be less than perfect.

You can argue that the last thing the world needs is an overwrought period drama. Some people in our current surreal political world may even argue that there were fine people on both sides and that glorifying Churchill means discounting the viewpoints of those on the other side of…World War II. I’m struck, though, by the comments made by McCarten when he mentions that the world is lacking decisive leaders willing to take a stand for what they know to be right for everyone, not just themselves.

That message is there in the campaign, even if it’s not at the forefront. Watch the trailer and you hear Churchill’s critics deride him as being interested only in self-aggrandizement. He’s not afraid to take on the burden of making the hard calls and ruffling the feathers of anyone who would try to lead him down a more cautious path. If the audience isn’t too busy seeking fluffy entertainment that distracts them from the problems of the world this weekend, it might just find inspiration in this story.