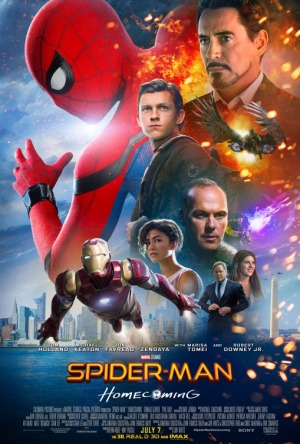 Spider-Man is back in theaters in this week’s Spider-Man: Homecoming. After an extended cameo in last year’s Captain America: Civil War, this is Tom Holland’s second outing as the web-slinger and his first in the character’s own movie. Well…kind of his own movie. The corporate cooperation that began with Civil War continues here. Sony, which owns the theatrical rights to Spider-Man, is essentially loaning him out to Marvel Studios, which manages the highly successful Marvel Cinematic Universe. So Sony gets to use the successful platform of that behemoth to help launch their third go-around at Spider-Man, while Marvel gets to incorporate Spidey into their big event movies.

Continuing the story set up in Civil War, Peter Parker is enamored with the tech genius Tony Stark (played again by Robert Downey Jr.). Stark provides him with a high-tech suit to help Parker fight local neighborhood crime as Spider-Man. The stakes get considerably higher when Spidey crosses paths with, and gets on the wrong side of, The Vulture (Michael Keaton). That conflict threatens everything that Peter holds near and dear and could upend the life he leads as a seemingly unremarkable high school student.