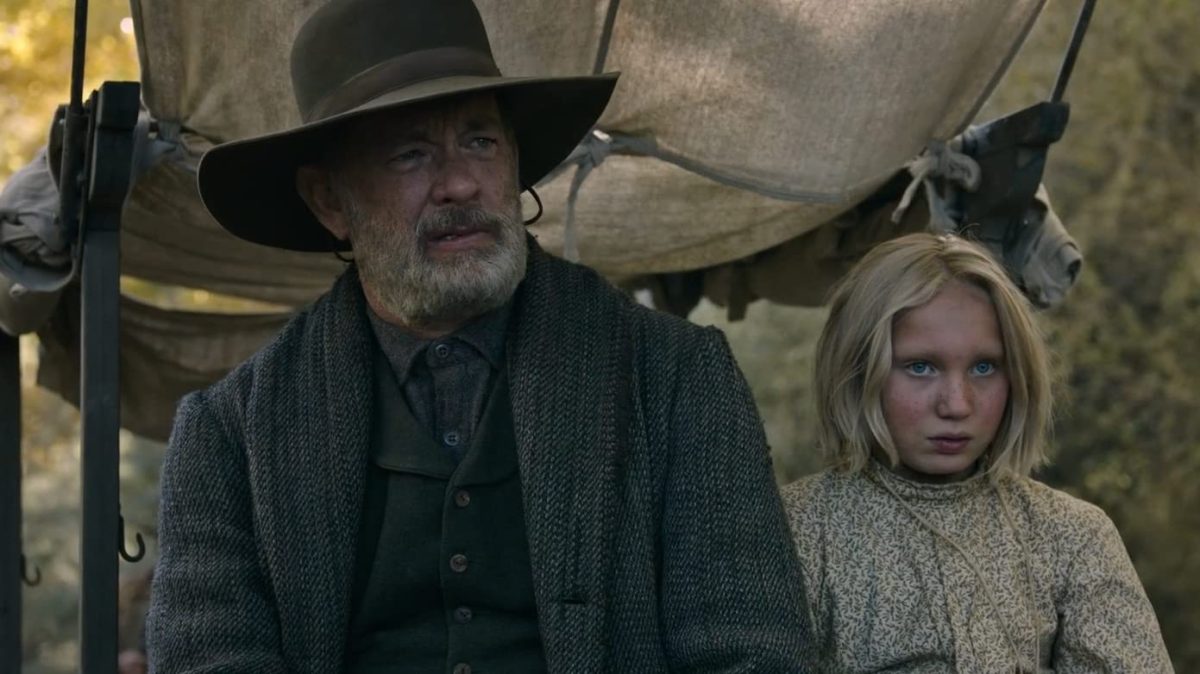 How Universal has sold a period drama about the power of news.

Tom Hanks stars in News of the World, the latest film from writer/director Paul Greengrass. Hanks plays Captain Jefferson Kyle Kidd, a retired soldier who now travels across America’s 19th century western frontier telling settlers and others stories from the rest of the country and the world. While in Texas, Kidd encounters Johanna (Helena Zengel), a young white girl who has been raised by a Kiowa tribe and is now being returned to her remaining family. The two encounter all the dangers the rural west has to offer as they try together to make it to their destination.

First reactions started coming out a few weeks ago, mostly positive, and the movie currently sits at a very good 86% Fresh on Rotten Tomatoes. Universal’s campaign for the film has been as serious and dramatic as you would imagine given both the subject matter and those behind and in front of the camera. Let’s take a look.

Capt. Kidd and Johanna both stare off into the middle distance with the cloudy frontier sky behind them on the poster (by marketing agency BOND), released in October. It’s a simple but effective image that shows off the main selling points of the film, particularly Hanks in a dramatic role. The “Find where you belong” copy is a little vague but is likely intended to communicate the journeying elements of the story.

The first full trailer (9.4 million views on YouTube) was released in late October, introducing us to Capt. Kidd as someone who visits remote towns to share news from elsewhere in the country. In that capacity he meets a young woman who has been raised by Native Americans after her white family was killed. But keeping her safe will be difficult given not only his own unfamiliarity with children but also the robbers and other bad people who were plentiful in the American West at the time.

You’ll find the basic marketing content on the movie’s official website, including the trailer, synopsis and more.

The first footage from the film came in a TV spot released in early October. That footage shows Kidd and Jane setting out on their journey, including some of the dangers and problems they’ll face along the way.

A short featurette with Hanks talking about the story of the film and the arc of his character was released later that month, just after the first trailer came out. AMC Theaters had another exclusive featurette that touched on the political and social climate the movie’s story takes place in.

An exclusive clip was given to MovieClips.

Short videos like this were used as pre-roll and on social media.

While it wasn’t the first press for the movie, the news that it was among the first titles to be set loose by Fox in the wake of its acquisition by Disney was noted by many. Universal was the savior who likely rescued it from oblivion, eventually setting a Christmas 2020 release date.

Vanity Fair debuted the first stills from the movie in October along with some quotes from Hanks and Greengrass.

A profile of Zengel included comments from Greengrass along with her talking about getting the role and working on set with Hanks, who appeared on “The Late Show” last week.

I want to feel like this campaign was effective, mostly because I’m intrigued by the story and a fan of all involved in making the film. But the marketing seems like it could have happened in any year – particularly during awards season – and there’s little here that offers a sense of urgency or immediacy to what’s being presented.

What I mean is that here at the end of The Year of Our Lord 2020, we’ve all been through some stuff. So the story of the film, that Capt. Kidd is hoping to make something of himself and create an informed and entertained citizenry in the wake of a divisive and deadly conflict is more than a little timely. Hitting that element of the story could have made a stronger impact instead of seeming like a potential awards contender from any year.

That’s not to say it’s a bad marketing push, just that it could have been recalibrated to be a bit more relevant to the moment it’s being released in.