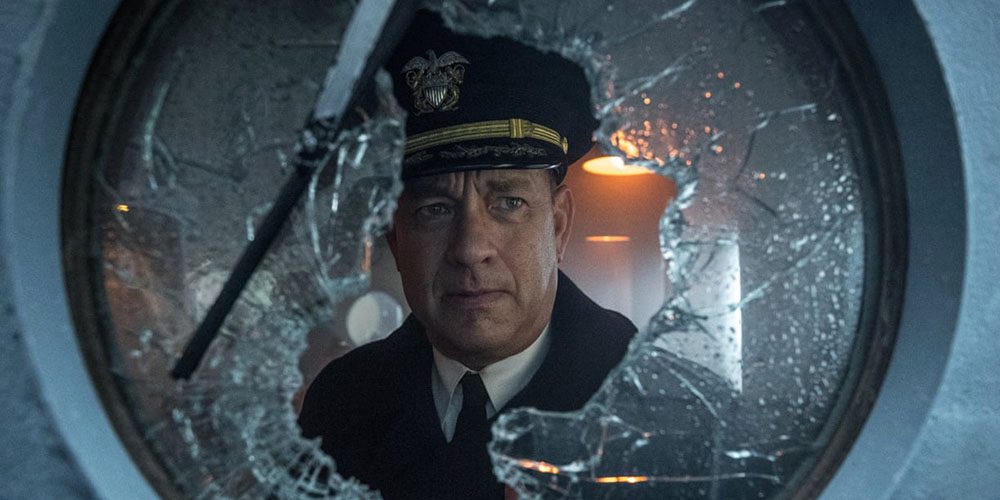 As is the case with many recent films, we should have marked the theatrical release of Greyhound a while ago. As it stands, though, the movie is coming to VOD this week via Apple TV+.

Based on “The Good Shepherd” by C S Forester, Tom Hanks stars as Captain Krause, a relatively inexperienced naval commander who is assigned to an Allied convoy crossing the Atlantic in the early days of World War II. Krause, still unsure in his post, faces a number of challenges, from the elements to the crew to the phalanx of Nazi submarines that stalk the convoy. Determined to keep his crew alive, Krause has to dig deep to balance all the problems in need of solving.

The campaign – first from Sony and then Apple – focuses on Hanks and his role as Krause, a no-nonsense commander in a no-nonsense situation. Reviews have been somewhat mixed so far, with the movie scoring 76 percent “Fresh” on Rotten Tomatoes at the moment.

In March the first poster (by marketing agency Works Adv) came out, showing Krause looking to the side with a colorful sunset – as well as a billowing American flag – behind him. Flying through the sky are warplanes to help establish the military setting. Copy at the top reads “The only thing more dangerous than the front lines was getting there,” hinting at how it’s a story of troop transportation logistics we’re in for.

That same text, and the same photo of Krause, is used on the second poster (by marketing agency Art Machine), also from March. But this time the conflict of the story is made a bit more explicit with the inclusion of images from a naval battle between submarines and destroyers. This fixes a key shortcoming of the first poster.

The same design was used on a new poster from June that ditches the copy but adds the Apple TV+ logo to signal the platform the movie will wind up being available on.

Krause is commanding a ship across the dangerous waters of the North Atlantic in 1942 as the trailer (12.5 million views on YouTube), released in March, opens. As part of a convoy of Allied ships, that means dodging U-boats and coming to the rescue of other ships. This is his first trip, but the choices he makes keep him and his crew alive from one moment to the next, even as others in the flotilla aren’t as lucky. It’s a tense story of survival being sold here, all told in colors that are just as saturated as the emotions are heightened.

Apple didn’t manage any sort of website for the movie, just a product page that has some rudimentary information and plenty of information on how to try the streaming service. It looks like a Twitter account was setup, but likely just to post the trailer so it could be used as an ad on that network.

Almost as soon as the marketing campaign kicked off in March the studio announced the release date was being pushed back by a month, but the reasons for doing so were unclear. In May news broke that Sony had offloaded the movie to Apple TV+ with no theatrical release potential in sight because of the Covid-19 situation. Finally in mid-June an early-July Apple TV+ debut date was announced.

At the same time, ads on YouTube and elsewhere promoted its upcoming Apple TV+ availability, using elements of the key art along with the trailer.

Apple released a featurette just a few days ago that had Hanks and others talking about the film’s story, the history behind it and more.

An interview with director Aaron Schneider allowed him to talk about how he approached making the film, especially working with Hanks, who also wrote the screenplay.

It’s strange to see the release imminent and for there to have been so little press involvement from Hanks, who was reportedly extremely disappointed when the film shifted from theatrical to VOD release. He’s usually been the biggest resource his film’s campaigns can rely on, and while he’s been out talking about Covid-19 testing and mask wearing, he doesn’t seem to have talked much about this film.

Despite that, this is a decent campaign for what looks like a Very Serious Movie. But it remains puzzling why it was ever slated for a summer release when it seems more like an October or November title with its subject matter, tone and visual style. I’m not sure who the summer audience for this would have been, especially if things had gone as planned and Tenet had been sucking up all the Serious Summer Movie air from the room.

Also missing is any mention of the source book or context for the period that would help audiences get their heads around it. So while it’s good, there’s definite areas where it falls short in capturing people’s attention.

Hanks and Schneider were interviewed here about their goal of authenticity in how the characters and situations were depicted on screen. Similar ground was also covered in an interview with costume designer Julie Weiss.

Another featurette with Hanks and others offered additional looks at the filming of the movie. Similar ground was covered when Hanks stopped by “The Late Show.”