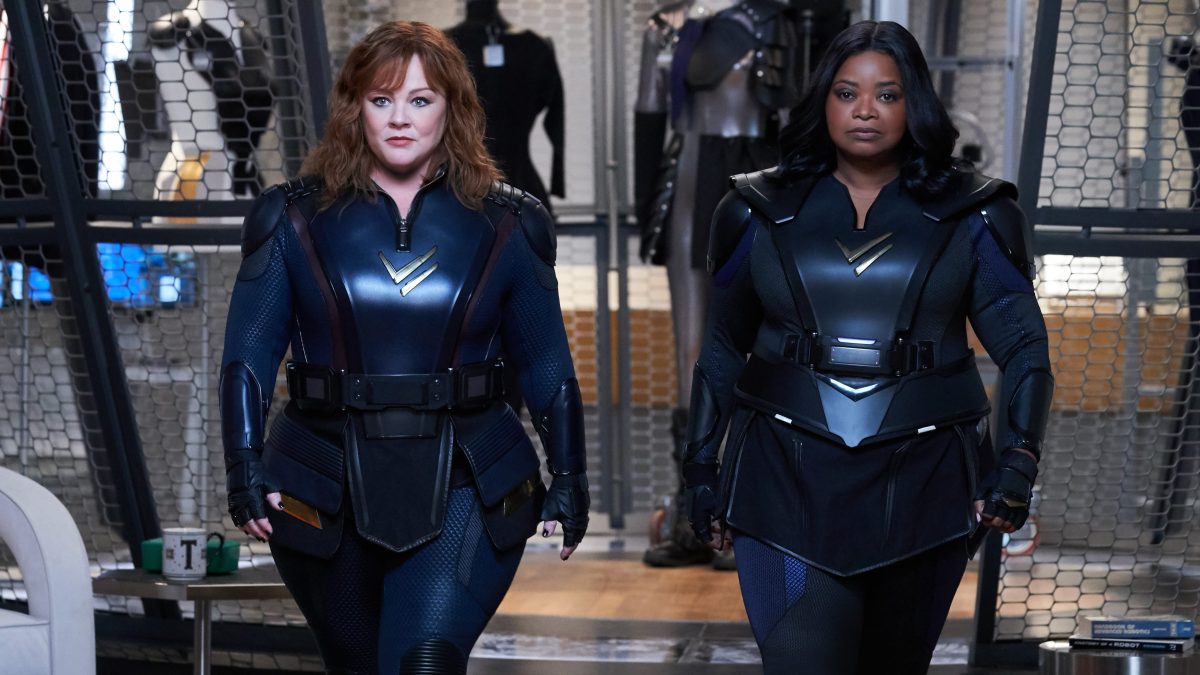 How Netflix has sold a new super-powered comedy.

The world of Thunder Force, out this week on Netflix, is one that is already filled with super-powered bad guys the police force is unqualified to fight. That’s why Emily Stanton (Octavia Spencer) uses the resources of the biotech company she owns to develop a serum that gives people powers to take on the villains. When her estranged best friend Lydia (Melissa McCarthy) accidentally takes that serum, the pair decide to team up to fight crime, becoming Thunder Force.

Netflix has been selling the movie in exactly the way you’d expect, highlighting the comedic pairing of Spencer and McCarthy and the outrageous super-powered situations they find themselves in.

Lydia and Emily strike heroic poses on the poster (by marketing agency The Refinery), which came out in early March. But the two are seen to have slightly different attitudes, exemplified by how Lydia’s wearing a few sponsor buttons on her uniform. The “New super. Nearly heroes.” copy makes it clear that while they might have powers they still have some work to do on using them.

Lydia and Emily are, we see in the first trailer (2.6 million views on YouTube) from early March, friends that have drifted apart, with Emily becoming super-successful and Lydia less so. When Lydia takes the super power-granting formula Emily’s been working on she gets powers, only to find Emily has already done so. The two decide to go become a pair of crime fighters, but the bad guys up their game as well, with hilarity ensuing.

No website and only a little bit of support, it seems, from Netflix on its brand social media channels.

The first footage came in January, part of Netflix’s announcement of its ambitious 2021 feature film slate. A pair of first look stills came out in early March, just ahead of the first trailer.

Two clips came out late last month, one showing Lydia foiling a robbery and the other showing her throwing a bus, both extended looks at scenes glimpsed in the trailer.

Most of the press included interviews with both Spencer and McCarthy together, including an appearance on “Kimmel” where they talked about being super heroes and how the genesis of the movie is wanting to mess with costar Jason Bateman.

Writer/director Ben Falcone also made the rounds a bit, talking about using the tropes of super hero movies to comedic effect and working with McCarthy and Spencer on the film.

This is the same campaign that’s been run for a number of McCarthy’s other movies, but that’s alright since it seems to work just about every time. That is to say, each works on an equal level and makes roughly the same pitch to the audience and has about the same result. McCarthy is a known quantity and this campaign, like those before it, reinforces that message.

The major difference here is the addition of Spencer, who’s a great partner for the comedy. Whether or not all of that makes this a funny sendup of the ubiquitous super hero movie remains to be seen, but if you enjoy McCarthy and her frequent collaborations with husband Falcone, this should be in your interest area. 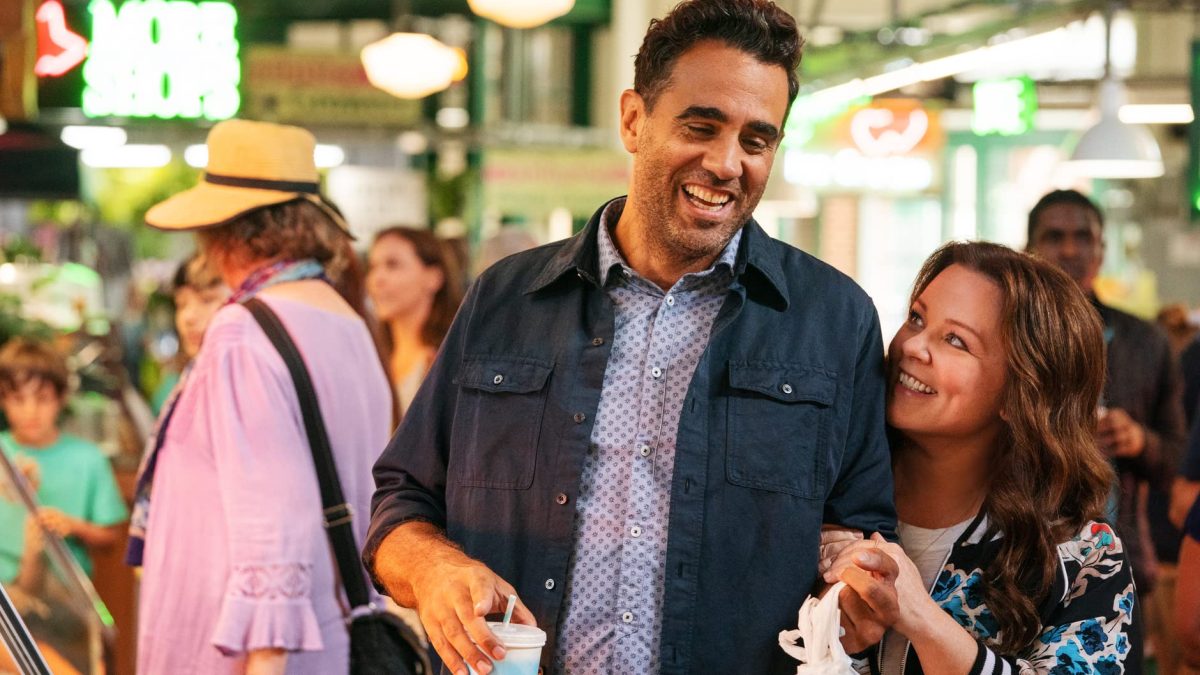 How HBO Max has sold a high-concept comedy not too far removed from reality.

Melissa McCarthy stars in this week’s new HBO Max release Superintelligence, directed once again by her husband Ben Falcone. In the film McCarthy plays Carol Peters, an all-around unremarkable woman who one day finds herself targeted by a powerful artificial intelligence (voiced by James Corden) that is deciding if it should enslave, destroy or leave humanity alone. It plans to study Carol for a few days before making its ultimate decision.

Along the way, the AI gifts her with a fortune to see what she does when freed from other concerns. The situation also prompts Carol to attempt to reconnect with her ex, George (Bobby Cannavale), wanting to spend what might be her last few days with no regrets about the past. Meanwhile, the FBI wants to know why Carol got the AI’s attention and what can be done about it.

As with many others, the movie was originally scheduled for theatrical late last year before being pulled by Warner Bros. and ultimately replatformed for streaming.

Carol and George are having a nice romantic moment on the poster (by marketing agency Works Adv), released in November. The two look like they’re enjoying each other’s company along with some champagne and it all seems pleasant until you realize the heart shape in the wall behind them seems to hint at some sort of violence or devastation that has created such an opening. That juxtaposition, intended to create some intrigue or interest, comes off as a bit odd, hinting at a movie that may not know which tone to take.

As the trailer (6.7 million views on YouTube), released in early November, opens, we see that an ultra-sophisticated computer system has set its eyes on Carol for…reasons. It knows everything about her and has led her to believe the world is going to end in three days, something it’s threatening to do if it can’t understand humanity more fully through her. With the FBI wondering why it’s targeted Carol, she takes the idea of there not being many more tomorrows to reconnect with an ex-boyfriend.

No stand-alone site for the movie, but HBO Max did give it regular support on its brand social channels.

A brief controversy emerged in mid-November when it was noticed that one of the groups taking part in the “20 Days of Kindness” campaign was staunchly anti-abortion, which seemed to be off-brand for McCarthy and others. She and the studio issued a statement days later saying that group had been removed from the effort.

After the trailer came out a number of featurettes were released that covered the love story of the movie, the makeover Carol gives herself to win George back and how much of an average, non-exceptional human being Carol is.

Other promos like this really leaned into McCarthy’s popularity.

McCarthy and Forte appeared on stage to do a bit during WB’s CinemaCon 2019 presentation, an effort to get exhibitors and others excited about the upcoming film. In October of last year it was announced the movie would forego a theatrical release and instead be saved for the debut of HBO Max.

The cast participated in a group interview about technology and related issues here.

Both Falcone and McCarthy appeared on late night and other talk shows to talk about the movie and once more working together.

The message of the campaign is simple, and largely the same one as most other comedies starring McCarthy. Namely, if you enjoy her antics and persona, you’ll likely enjoy this movie. If not, you may want to find something else because it’s probably going to be relatively similar to what you’ve seen before.

That’s not a bad thing, as McCarthy is a comedic powerhouse, one with a relatively solid and box-office record. Such a record makes her streaming feature debut more of a statement about the health of comedies at the box-office than it probably should be, even when adjusting for this being a pandemic year. She is who she is, especially when being directed by Falcone, and this campaign makes that abundantly clear.

A joint profile of McCarthy and Falcone had them talking about their long history of not only being a couple but also working together. McCarthy later appeared on “The Tonight Show” to talk about the movie.

New featurettes offered in-depth looks at both Corden and the two federal agents in the story.