How Disney has sold a feature take on a popular animated series.

Chip ‘n’ Dale: Rescue Rangers hits Disney+ today as a meta follow-up to the series of the same name from the late 1980s. In this version, Chip (voiced by John Mulaney) and Dale (voiced by Andy Samberg), meet and become friends in school before going on to star in the “Rescue Ranger” series. When professional ambitions pull Dale into a solo career, he and Chip part ways. 30 years later they are forced to reunite and put aside their differences to help their old friend Monterey Jack (voiced by Eric Bana), who was kidnapped as part of a toon bootlegging operation.

The movie also features cameos – either live action or in voice form – from Seth Rogen, Will Arnett, Rachel Bloom and a host of others. It’s directed by Samberg’s fellow Lonely Island member Akiva Schaffer, who convinced Disney to include animated characters from Warner Bros. Nickelodeon, Sony and other companies and then convinced those others to lend their characters for the film.

The movie was one of several announced by Disney during its 2020 investors presentation, though it had been in development for six years or so at that point. In 2019 Schaffer was brought on as the film’s director with Dan Gregor and Doug Mand writing the script.

That December 2020 announcement included the casting of Samberg and Mulaney, though it was later confirmed Tress MacNeille and Corey Burton, who voiced Chip and Dale (respectively) in the original series, would also return.

Things kicked off in mid-February with the release of a teaser trailer (3.2m YouTube views) that immediately communicates what kind of story the audience can expect. Presented as an “E! True Hollywood Story” type show, we see Chip and Dale rise in popularity thanks to their show before it all comes crashing down. 30 years later they have to put their differences aside to help their friend, with lots of hijinks along the way. It manages to explain why they two are animated in different styles and show off some of the animated cameos that will provide much of the appeal.

The partners are back-to-back on the poster released at the same time, which promises “It’s not a reboot. It’s a comeback.”

It's not a reboot. It's a comeback.

The full trailer (3.6m YouTube views) then came out in late April. It offers more of the same, with a few more cameos, a bit more explanation of the story and so on, but the message to the audience hasn’t changed here.

Similarly the next poster shows the two chipmunks striding toward the camera with an explosion behind them but otherwise is sending the same message as the first one-sheet.

A half-dozen character posters came out earlier this month with the same messaging as the other one-sheets, just featuring closer looks at some of the key people and animated characters.

A clip was released a week before the movie debuted that offers an extended look at Dale explaining the CGI surgery he had to revitalize his look for the modern age.

The cast and crew came out for the red carpet premiere in Hollywood earlier this week.

Two more posters were released that poke fun at the kinds of designs frequently featured on the one-sheets for action movies.

You* asked for it, we delivered. Here's even more shiny new ✨MOVIE POSTERS✨

*Dale asked for it pic.twitter.com/kHaxuRChKR

Both Samberg and Mulaney filled in for Jimmy Kimmel when he had Covid (again), interviewing each other about this movie and generally goofing around.

Chip and Dale narrate a tongue-in-cheek making-of featurette that has a few more cameos but is basically a way to continue the self-aware nature of the movie. Another video offers a look at some of the voice cast recording their lines alongside the finished footage.

Banner ads like this drove people to the Disney+ site to find out more about how they could watch the film. Audio ads on Spotify in the last week have also promoted the film’s streaming debut.

That out of the way, the largely positive reviews – it currently has a 79% Fresh rating on Rotten Tomatoes – have compared it favorably to Who Framed Roger Rabbit for its self-aware story and ability to bring together a number of different animated franchises.

But the key is likely going to be whether people enjoy the kind of riffing Samberg and Mulaney are known for. That’s a big part of the campaign and will either make people definitely seek it out or avoid it at all cost. 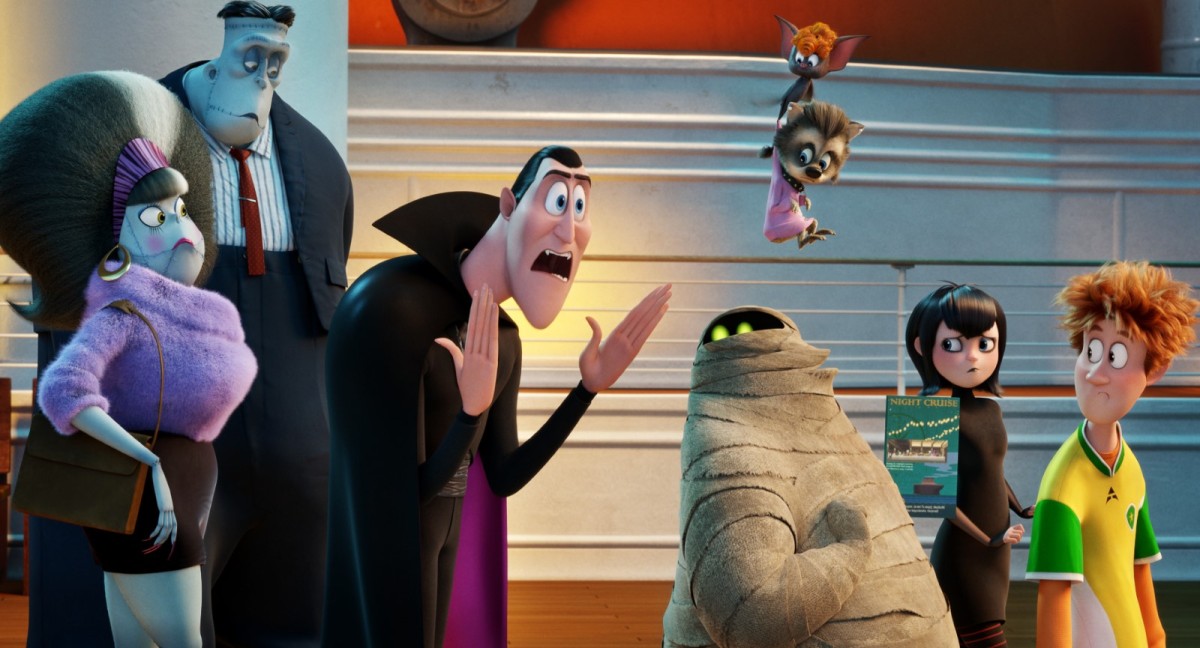 I’ll be honest, I’ve been pleasantly surprised by the first two installments in the Hotel Transylvania series. Where they could have been lazy toss offs that take a decent premise and deliver the least interesting take on it, director Genndy Tartakovsky and his crew have consistently delivered solidly entertaining animated comedies that are genuinely funny and original. Helping matters is that star Adam Sandler’s voice work as Dracula is his most interesting, committed performance ever, a stark contrast to his usual DGAF attitude.

Now Drac and the other monsters are back in Hotel Transylvania 3: Summer Vacation. This time around Mavis (Selena Gomez) and Johnny (Andy Samberg) have convinced Dracula and everyone else to head out on a cruise vacation. Little do they know the ship is captained by a descendant of Van Helsing, the famous vampire hunter, who’s out to complete her ancestor’s work. Things get complicated though when she and Dracula fall for each other.

The first two posters were the first indicators (at least that i was aware of) as to what the plot was. That came not only through the subtitle that was shown but in how on one Drac is shown wearing flip flops, his cape blowing to show he’s also sporting shorts and a floral print on the inside of that cape. The other has him in full Hawaiian regalia, his suitcases around him and a scowl on his face. That one also has the copy “Family vacation. It will suck the life out of you.” A third that came later shows Drac pulling his coffin-shaped luggage with stickers from places like the Bermuda Triangle all over it. 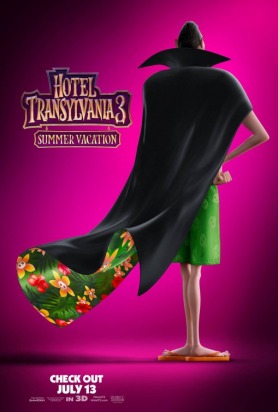 The whole gang is buried up to their necks on the theatrical poster, Dracula looking less than thrilled though everyone else seems to be having a good enough time. “He’s going to need a vacation after this vacation” is a tagline that seems designed more to resonate with the adults in the audience than the younger crowd.

The first trailer starts out by familiarizing the audience with Drac and his hotel before showing that Mavis has arranged for him and all the other regulars to take a cruise specially geared for monsters. He’s not thrilled about this, particularly when his father shows up.

It’s not all that detailed but gives the audience the basic idea of what they’ll be seeing in this installment in the franchise and assuring them it’s more of what they’ve already enjoyed.

When the official trailer opens Drac is looking for a date but having zero luck with apps and technology. Mavis convinces him to take a break and so the whole gang heads out on a cruise that offers plenty to do for everyone. Drac is resistant to give into efforts to set him up with someone until he sees Erika and is smitten. She has a secret, though, and is only getting close to him to exact generations-old revenge. Mavis is suspicious but Drac’s clueless.

That storyline isn’t explored in-depth by any means, nor are any of the others. A lot of the same gags from the teaser are repeated here with just enough of the plot shared to show people there is one.

There’s not much of interest on the official website, just the standard information like trailer, story recap, gallery and more. A few casual games lighten things up a bit, but overall this is just a standard minimal effort site.

A brief TV spot was released on Valentine’s Day that showed all the different forms love can take.

Amazon, which partnered with Amazon to offer Prime members exclusive screenings two weeks before the general release, a stunt that netted the movie an early $1.3 million. That partnership also included adding a skill to Alexa that allowed users who asked about the movie to hear a bedtime story.

Sony, as it’s done for a few animated features recently, brought it to Cannes (out of competition) with a big publicity stunt meant to induce lots of social sharing. Right around that time the studio released an extended clip showing the assembled monsters on the flight they’re taking to their vacation destination. It later was part of the Annecy Animation Festival, where it received positive buzz and audience reaction and where Tartakovsky spoke about why he came back to the series.

If there was a massive press push in the final days before release, I can’t find it.

OK, cool. I like it. There’s something here for all audiences and it certainly sells the same tone and vibe as the previous two efforts. I don’t know if the love story with Drac is going to be a big incentive for younger crowds, but it also likely won’t hurt things. The main value proposition the movie has to offer, it seems, is that it’s not a super hero movie and could give people a little bit of a break while still offering a familiar property for them to enjoy relatively worry free.

Kathryn Hahn has made a few media appearances recently, showing up on “Kimmel” to tell stories and promote the movie a bit.