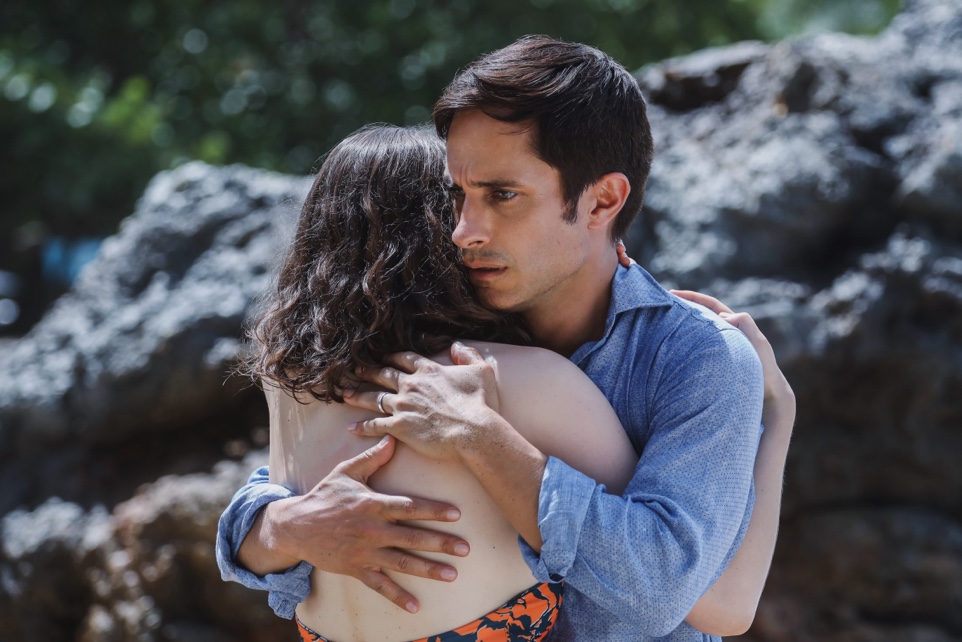 Director M. Night Shyamalan, known for his intricately-structured slow reveals, returns with this week’s new release Old. Gael García Bernal stars as Guy, who’s vacationing with his wife Prisca (Vicky Krieps) and their two children. The family visits a secluded beach but soon discover they, as well as others already there, are mysteriously aging rapidly, with years going by in just minutes. With time running out, they look for ways to escape before it’s too late.

The marketing campaign has focused on explaining that premise, largely because hooking audiences to come see the twists in the last act is the primary value proposition for any film from Shyamalan. With middling reviews giving it a 60% Fresh on Rotten Tomatoes and projections for a $12-15 million opening weekend at the box-office, let’s take a look at some of the details.

The first poster, released last September, hints at time being a major factor in the story by showing human beings falling through an hourglass like grains of sand. The “It’s only a matter of time” copy unnecessarily underlines that hint.

A new trip from Writer/Director @MNightShyamalan. It’s only a matter of time. #OldMovie pic.twitter.com/j3cjoO437w

That theme is made even more explicit on the theatrical poster, released in May. This one shows a woman relaxing on the beach, her face hidden by her hat but her legs and arms visible. One side of her body, we see, is much more gaunt and aged than the other, further indicating to the audience that there’s some unnatural force at work in the story. A motion version came out at the same time.

The Dolby poster shows an aerial view of the beach, with some kind of shape visible in the lines formed by the waves and sand.

When the first trailer (23.2 million views on YouTube), released in May, begins, we see that some vacationing families decide to defy requests to not visit the beach near the resort they’re staying at. That choice has dramatic consequences when after a series of strange events they find they are aging years in just minutes and can’t escape, leading everyone to make some very difficult choices. It’s full of tension but not silly and works to create anticipation and wonder about what power is behind what’s happening.

You’ll find only the basic marketing content on the movie’s official website, including a photo gallery that has a handful of behind-the-scenes shots. There were also social media profiles for the movie.

Shyamalan announced the movie and debuted the first key art in September, 2020.

Shyamalan briefly spoke about the movie in early 2021 when he appeared on “The Tonight Show.”

The first look at the film came in a Super Bowl spot that aired in early February. Understandably, there’s not a whole lot of the story in that spot but it does have enough elements to hint at the kind of story audiences can expect.

After the first commercial debuted during the 2021 Super Bowl, the director appeared on Entertainment Weekly’s Instagram to discuss the movie.

While the movie didn’t screen there, did sit down for an interview at the 2021 Tribeca Festival.

Clips that hint at the mystery of what’s happening on the beach and the confusion of the characters began hitting in mid-July.

Shyamalan talked about the movie when he appeared on “Late Night” in July.

Clips like this started coming out earlier this month, but none offered much in the way of detail as to what the overall story was.

The second key art was used for outdoor ads like this as well as online ads that drove traffic to the official website where people could buy tickets.

My friend shot this. Okay New York! @oldthemovie One week till it opens! So excited! pic.twitter.com/XTmT8b4XAW

A special movie-themed escape map was added to Fortnite where people had to collect needed resources and put together the clues to get out of that area.

Surprisingly, the cast talked about how this movie doesn’t rely on the typical Shyamalan twist at the film’s premiere earlier this week.

How Shyamalan worked with his daughter on the film was the subject of a short featurette released just before the movie came out. He also discussed how he doesn’t think he makes horror but something more akin to drama in this spot.

Another featurette, this one exclusive to Fandango MovieClips, has the cast and crew discussing the concept of time and how it relates to the movie. The director discussed how sound and other elements help create fear and uncertainty in a Dolby-exclusive video while he and the stars all appeared in a Regal Cinemas video.

Shyamalan discussed how this movie fits into his overall filmography and more in this interview. He also spoke more in this profile about what drives him creatively and what some of his film influences are and have been.

M. Night Shyamalan movies are always sold on the idea that the audience won’t believe what lies just beyond what they see in the trailers and this campaign doesn’t significantly deviate from that formula.

The concern with that approach is that it can hold so much back there’s little for the audience to actually comprehend. Put another way, there’s a minimum level of context needed for the audience to grasp the broad outlines of the story and why they should care about the characters.

Universal’s campaign for Old, in my opinion, *just* crosses that tipping point. That could mean that, whatever the merits of the movie itself, it may simply be too obscure a proposition to motivate people into making this choice. Not that the campaign isn’t well-executed from a technical standpoint – it is – but it’s right at the cusp of holding too much back to maintain the sense of mystery associated with the filmmaker.