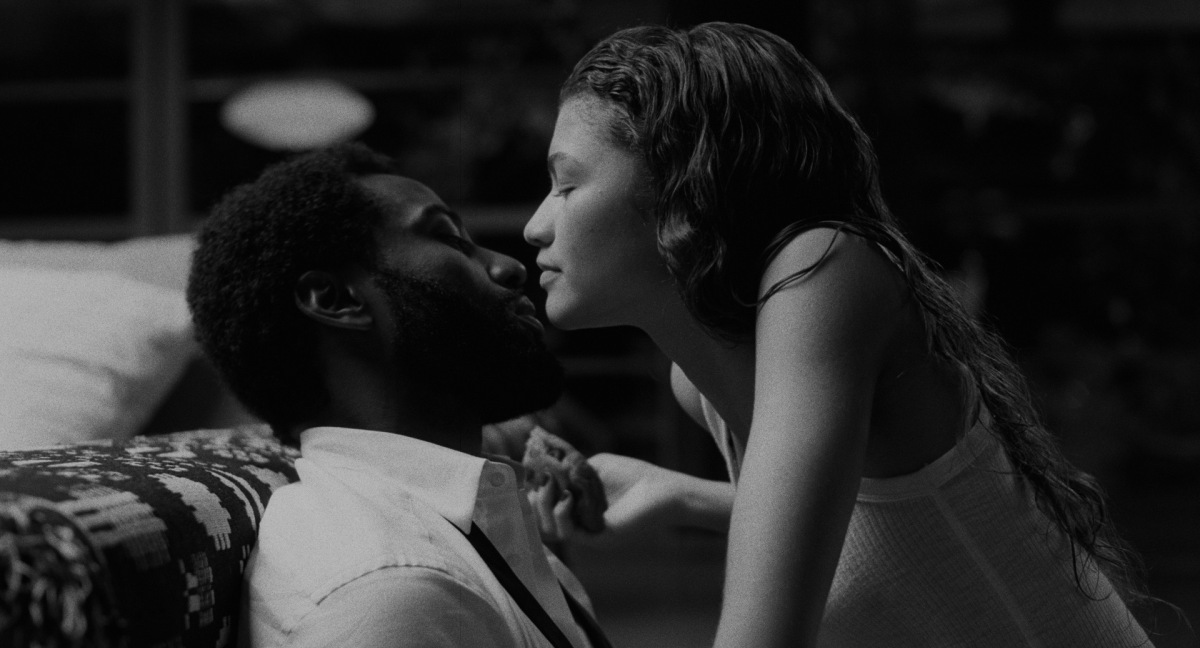 How Netflix has sold a shot story of love and all the messiness that entails.

Malcolm & Marie gained notoriety early in 2020 for being one of the first films to be shot after pandemic-related closures and other restrictions went into place. Appropriately, the movie features a small cast of just two and takes place in a single location.

Zendaya and John David Washington play Marie and Malcolm, respectively. The couple live together in Los Angeles, with the story opening as they return from the premiere of a film directed by Malcolm. As they wait for reactions and reviews to come in, the two engage in a number of conversations that alternately solidify and call into question their relationship, with each speaking their real feelings – both good and bad – about the other.

Written and directed by Sam Levinson, the movie currently has a poor 58% on Rotten Tomatoes, having been sold as a stark drama anchored by the performances of the two leads.

“Madly in love” is a nice way for the copy on the poster (by marketing agency P+A), released in January. That communicates some of the range of emotions in the story, while the black and white photo of the two reinforces that with its image of the two in a passionate embrace. The retro title treatment also acts as a nice hint to the slightly throwback nature of the drama being sold.

Netflix released the first trailer (2.8 million views on YouTube) in early January. “This is not a love story. This is love.” is the message displayed on title cards halfway through the trailer, and that’s certainly the message that’s sent. We see the couple laughing and loving and fighting and running, all seemingly over the course of a short period of time. The performances really come through here, which is good since those are the central selling point of the film.

The movie did have its own social media accounts, including a Twitter profile where promos and other updates were shared. Netflix also created a Giphy collection of GIFs from the film.

Zendaya released a still from the film in early July, effectively announcing the film was coming. Details emerged after that about how the film was shot in secret and during the Covid-19 pandemic’s quarantine period, with multiple safety protocols in place for everyone involved.

A clip released late last month shows just one of the heated conversations the couple has over the course of the night.

A feature profile of Zendaya had the actress offering lots of insights into the origins of the story and how she and Washington worked in the early pandemic conditions. For his part, Washington talked about similar topics, and addressed the decade-plus age difference between the leads, in an interview later on.

Zendaya was interviewed by Carey Mulligan about making the movie. She also appeared on “The Late Show” to promote the film and had a feature profile that covered her career to date as well as what’s next for her.

Both Washington and Zendaya spoke about how they used their real life relationships to influence their performances.

While sure there’s a certain cloyness to some of what’s presented here, it comes off even more like a stage play than some of the actual filmed stage plays that have come out recently. That’s a positive thing, since it brings with it connotations of it being an actor’s showcase, kind of like a play being produced in a black box theater in order to strip away some of the distracting artifice in order to focus on the story.

We can take issue with the age difference between Washington and Zendaya, but it’s not so great – and neither so young – that it becomes overly creepy in a Woody Allen kind of way. And purely from an acting perspective, it’s clear Zendaya can hold her own against her older costar. So it’s a solid campaign that sells a throwback, performance-centric drama that, if nothing else, will serve as one of the first artifacts of how very weird 2020 was for film productions.