How Amazon Studios is selling a movie of stardom, paranoia and surveillance. 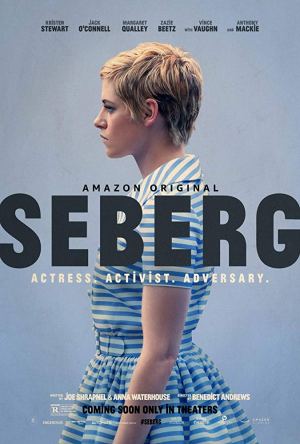 Jean Seberg helped usher in the French New Wave of cinema when she starred in 1960’s Breathless, written by Francois Truffaut and directed by Jean-Luc Godard. In this week’s new release Seberg, the actress is portrayed by Kristen Stewart. With the stardom that comes from her breakout performance in Godard’s innovative masterpiece, Seberg wants to challenge herself as a performer and do something important with the profile she’s gained.

To that end she gets involved in the American civil rights movement of the 1960s, eventually becoming romantically involved with Hakim Jamal (Anthony Mackie), a leader in the movement. Her actions, though, put her on the radar of J. Edgar Hoover’s FBI, who believes such groups are anti-American and dangerous. She becomes paranoid she’s always being listened to and followed, which sometimes she is.

In marketing the film, Amazon Studios has focused on how the story highlights the dangers of putting yourself out there for a cause and the impact it can have on your career and personal life.

Stewart as Seberg is shown on the poster looking very much the early-60s manic pixie dream girl with her tom-boy haircut and short, colorful dress. It’s a simple image but one that highlights the movie’s key selling point, which is Stewart’s take on the subject. Her persona is communicated in the three adjectives shown under the title: “Actress. Activist. Adversary.” .

November brought the release of the first trailer (629,000 views on YouTube). It sells a story steeped in themes of identity and paranoia as we see Jean go from merely uncomfortable with the public image that’s been crafted for her to one who wants to define her own persona more completely. We’re shown how she starts off as chafing under the spotlight and refusing to be something she doesn’t want to be to someone who wants to enact real change in the world. Doing so threatens not only her marriage thanks to the affair she begins but also her safety as her work with civil rights groups gets the attention of law enforcement who wants to shut those movements down. It’s a powerful combination of messages, one that certainly resonates in the modern day.

There is an official website for the movie but it only has the most basic of information. It’s only received limited support on Amazon’s social channels.

The 2019 Venice Film Festival was slated to be the venue for the movie’s premiere. Shortly after that it screened at the Toronto Film Festival and was later slated to appear out of competition at the London Film Festival.

Stewart received the Golden Eye Award when the movie was scheduled for the Zurich Film Festival. It also played at the San Sebastian Film Festival.

Online ads used the title treatment and other images from the poster art to drive visitors to the official site to learn more.

A first-look photo was released at the same time as the news it would be screening at Venice. There was a profile of Stewart back in August where she talked about this movie and her career to date.

An interview during Venice had Stewart talking about how she worked to honor the subject she was playing and more. During Toronto she spoke about similar topics while at the same time making it clear artists have the right and responsibility to speak out on social issues that are important to them, both within and outside of their work. She and Mackie talked about how fame has changed in the age of social media.

Stewart continued to talking about celebrity privacy and related matters during the festival and then about the relationship between actor and director while in San Sebastian. She spoke more about the process of filming the movie here.

A profile of Mackie focused on how this was one of a few recent roles to take him back into more dramatic territory as compared to his super hero film work.

While the campaign itself is decent enough, it just hasn’t received the same amount of attention from Amazon Studios that other recent releases have. So everything here has been fairly muted and restrained, without a lot of additional context or background given to reinforce the story’s message that just because you’re paranoid doesn’t mean someone isn’t actually out to get you.

What’s doubly disappointing is that Stewart is the perfect star for a movie like this, given how her privacy has been invaded by the public and media for so long and so pervasively. While she spoke about those issues in interviews, there’s nothing in the marketing itself to hammer that point home, which is a missed opportunity.