Once more into the tale of the reluctant English king and the tumultuous life of the hero of Agincourt. 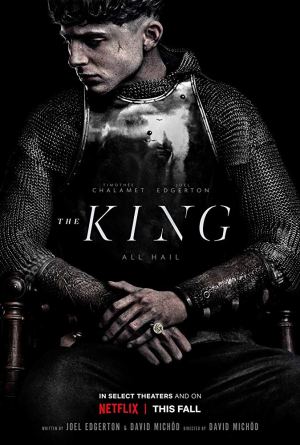 The story of King Henry V, famously told over the course of several plays by William Shakespeare, once more comes to the screen in this week’s The King. Timothée Chalamet stars as Prince Hal, who’s living a life dreading the day when he eventually ascends to the throne of England.

When that day comes, the newly-crowned Harry finds that palace life is a constant fight for survival among the political schemers inhabiting the halls. Not only that, but he must finish the war his late father started. With such pressure and few allies, Harry turns to the advice of trusted advisor and friend John Falstaff (Joel Edgerton) to help survive threats both internal and external.

Netflix is putting the film, directed by David Michôd, who co-wrote it with Edgerton, in theaters for a limited time beginning this week before it comes to the streaming service in early November. With a 78% Rotten Tomatoes score, it’s just the latest high-profile drama to receive that kind of platform release from the company.

Henry looks pensive and tortured on the poster (by marketing agency BOND), released in August. He’s dressed for battle and looks like he’s already been through more than a bit. “All hail” reads the copy placed in the middle of his chest.

Netflix released the first trailer (3.6 million views on YouTube) in August, just before the movie’s planned premiere at the Venice Film Festival. As it starts, Hal is ambivalent about the responsibility he’s been given and weighed down by the expectations of those around him. He needs people he can trust, a group that’s in short supply as he faces palace intrigue as well as actual war. Not much else is shown as the trailer is primarily aimed at establishing the look and feel of the movie and showing the dramatic performances from the lead cast.

Nothing here, though Netflix gave it some support on its brand social channels.

The movie had been in production at Warner Bros. for years, but Netflix acquired the project in early 2018.

There may have been some online ads, especially in the areas where the movie is playing in theaters. More are likely to come when it’s available via streaming.

A first-look photo featuring Chalamet was released at the time of the Venice Film Festival announcement. While the movie was at the festival, writer-director David Michôd was interviewed, commenting on why he chose to cast Pattinson in the film.

At the movie’s premiere in early October, Chalamet spoke about his approach to a character he was previously unfamiliar with and more.

Most of the rest of the press focused on Chalamet’s answers to unrelated questions like how he thought costar Robert Pattinson would do as Batman and such.

It’s a story that is likely familiar to most people who actually paid attention in junior year English class, but the addition of Chalamet, it’s hoped, brings more eyeballs to the project. The campaign obviously emphasizes his role in the movie, making sure to present him as a young man with the literal weight of the world on his shoulders.

“Prestige” is the primary message being sent. Netflix is selling the movie as a prestige film from a handful of very hot stars and filmmakers, the kind of thing that used to be commonplace in theaters every October and November. That’s communicated in the dim, dirty poster and the dramatic nature of the trailer, showing the toll all the intrigue and warfare takes on the soul of a young man who wants none of it.

Michod spoke here about Pattinson’s role and how the actor didn’t require much in the way of directing or coaching.

Netflix has begun running more online ads as the movie nears its release date on the streaming service. It also released a new trailer that positions it even more so as an epic political story.

Chalamet got another brief profile here.

More from Chalamet when he appeared on “Late Night” to promote this and other recent projects.

Netflix put out another featurette that shared some of the real stories behind Henry V and how that was represented in the film. A second has the film’s writers detailing how they shot the film’s key battle sequence.

How the movie’s production designer managed to recreate key locations is covered in this interview.