“Between Two Ferns” was one of the biggest early hits scored by Funny Or Die back before the stripmining of the online ad industry by Google and Facebook caused it to lay off a significant percentage of its staff. The site is still operating, but it has lost much of its focus and doesn’t have the cultural currency it did prior to 2016. Notably, the last original episode (with one exception in 2018) of the show – hosted by Zach Galifianakis, playing a slightly skewed version of himself – was released right around the same time that happened.

Now Galifianakis is back in the Netflix original feature Between Two Ferns: The Movie. The story has Galifianakis suffering a professional setback on the show that necessitates him needing to take production on the road in an attempt to interview as many celebrities as possible. Of course given he’s more than a little clueless and his crew isn’t a whole lot better, things turn out a bit badly as they get involved in a series of misadventures. 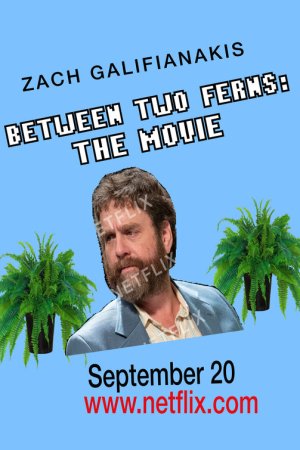 I’m kind of in love with the first poster (by marketing agency WORKS ADV). Galifianakis’ name is placed above the title, which is presented in its usual pixelated type just as it was on Funny Or Die when the show’s conceit was that it was a no-budget public access program. What’s great is that those two elements are slightly askew from one another, just enough to make you a little uneasy. The photo of Galifianakis looks like it was uploaded by someone who knew just enough about Photoshop to be dangerous and still bears a “Netflix” watermark like the designer didn’t remove it from a press site. Finally, the date and the Netflix URL are shown using the most obnoxious font possible.

It’s fantastic. Every rule of graphic design is broken here in an attempt to remain on brand for the property.

The second poster looks a bit more professional, placing Galifianakis and his talk show backdrop in the middle of a remote highway to communicate he’s stepping outside the studio.

The first trailer (3.1 million views on YouTube), released earlier this month, immediately starts off with the familiar: A moment from the titular talk show of Galifianakis interviewing Matthew McConaughey. That interview goes even more horribly wrong than usual and Galifianakis is told he has to go on the road to produce more episodes in order to make things right. That send him and his crew off on a trip across the country where they have a series of wacky adventures and interview even more celebrities. The names of those starts are sprinkled into the trailer to show everyone who’s involved before it ends with an in-joke regarding the movie’s distribution on Netflix.

As usual there’s no website for the movie, but it did receive some support on Netflix’s brand social channels.

While there had been some talk about a potential movie for a little while, an official announcement along with the revealing of the release date didn’t come until late May. Some advertising was done that was very much in line with the poster key art.

The first still came out in August. Other than comments made by the cast and crew at the premiere earlier this week there doesn’t seem to have been a lot of press activity, which is surprising given this is a well-loved property being revived with a number of big stars attached. Galifianakis talked about the movie a bit while he was doing press for Missing Link a few months ago, but that’s about it.

You certainly can’t say people haven’t been having fun while mounting this campaign. Those posters are ridiculously good and consistent with the show everyone grew to love over the last decade, as well as Galifianakis’ own persona and style. It may be a bit high concept and it remains to be seen how something that worked so well in short bursts translates to feature length, but you can’t fault them for trying.

If anything, it’s the timing that may be impacting the extent of Netflix’s campaign, as the company’s focus has been on the films debuting at Venice, Toronto and other festivals and which are expected to contend for various awards over the next several months. So this release seemingly hasn’t been as much of a priority. But it looks like an entertaining way to spend 82 minutes, which sometimes is enough of a win.

Galifianakis spoke at the movie’s premiere about the trepidation he felt about expanding the concept from sketch to feature, as well as the different world the movie is being released into. He also had some fun with former costars and appeared on “Kimmel” to hype the film a bit.

Netflix released an extended cut of the interview with Paul Rudd from the film, something many people called out as a highlight.

A couple different stories focused on the cameos in the film, while a New York Times feature covered the history of Funny Or Die, from the first viral bits to how this movie is meant to signal a kind of rebranding for the site.

Director Scott Aukerman got a bit of attention once the movie was available to stream, including this interview where he talked about how he managed to shoot the movie in secret.

The movie got a song of its own thanks to a couple hot current artists.