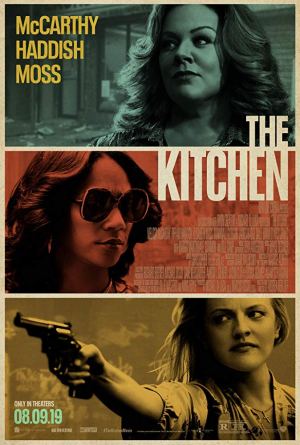 “The Kitchen” started life as a comics series from the now-defunct Vertigo imprint of DC Entertainment. Written by Ollie Masters with art by Ming Doyle, the story followed a trio of women whose husbands – all leaders in the local crime scene – are in prison. Promises by others to keep them afloat are abandoned, leading all three women to take matters into their own hands and get into the family business themselves.

This week’s big screen adaptation The Kitchen retains that much of that story. Tiffany Haddish, Melissa McCarthy and Elizabeth Moss star as Ruby, Kathy and Claire, respectively. The three are determined to survive Hell’s Kitchen of the 1970s. What surprises each one of them is that not only do they find they’re adept at the kind of violence and intimidation necessary to control their territory, they kind of enjoy it. Specifically, they enjoy the freedom that comes from no longer being dependent on anyone else for their survival and wellbeing.

[Disclosure: DC Entertainment was a client of mine in 2014 when the series launched at Vertigo and I was involved in promotion for it during the eight months it ran. That, and my enjoyment of that series, has absolutely influenced how I’ve viewed the movie’s marketing campaign.]

There’s a strong 70s vibe on the first and only poster, released at the end of May. All three women are shown in their own section of the design, which uses vertical color-coded stripes to break them up.

The premise of the story is laid out in the first trailer, showing the problems the Kathy, Claire and Ruby are having in making enough money to keep their families afloat while their husbands are in prison. With all other options off the table and no one stepping up to help, they begin to carve out their own criminal operations. That brings them into conflict with other established gangs and syndicates, but they’re determined to answer to no one and do what everyone else has been unable or unwilling to do.

The second trailer was released in mid-July and starts with the trio of women having already gained a reputation that brings them to the attention of a competing crime boss. It jumps back a bit to show why they have undertaken their own enterprise and why, including how they refuse to go back to how things were. At the end we’re once back to their meeting with the crime boss as they face a pivotal moment that ends on an uncertain note.

As is now standard, there’s almost nothing beyond an assemblage of marketing materials available on the movie’s official website. Nice use of the key art to maintain some brand consistency, but that’s about all that can be said in favor of the site.

Exhibitors got a taste of the dramatic work by the often-comedic cast when WB showed off footage during its CinemaCon 2019 presentation.

The movie was among those announced by AMC Theaters as part of the first curated under its Artisan Films program to highlight smaller films.

Haddish, McCarthy and Moss all appeared as a group at the MTV Movie & TV Awards in June.

Featurettes have come out in the last couple weeks including one exclusive to MovieClips that focused on the history of Hell’s Kitchen in the era depicted. Another that was exclusive to DC included nods to the original comic and talked about how the story depicted three women refusing to be beaten down by circumstance. How Berloff assembled a largely female crew was covered in another.

Some TV advertising was surely done but those spots aren’t available on YouTube and don’t seem to have been shared on social platforms.

While this movie’s release was still a ways out at the time, a THR cover story on Haddish included mention of it as one of the in-demand actor’s upcoming projects. Outside of casting announcements, that constituted one of the first publicity beats for the film.

A first look still was released in late October.

A few months later director Andrea Berloff was profiled in a piece that covered how and why she got involved in the project and how she went about tackling the story.

The release of the second trailer was accompanied by stories about The Highwaywomen, the country supergroup whose cover of Fleetwood Mac’s “The Chain” is featured in that trailer.

McCarthy appeared on “The Late Show” in July to chat about the movie and more. A couple weeks later Moss talked with Kimmel.

The three leads were interviewed together about how they got involved in the project and what attracted them to the story. Similar comments were made by them at the movie’s recent premiere.

Berloff talked about the pressure she was under helming a female-led movie in an industry that gives lip service to expanding the range of stories being told but which puts them under a lot more scrutiny than it does the movies with men in leading roles.

The movie’s comics origins aren’t a major part of the campaign, which is too bad since it’s just these sorts of non-super hero stories that have proven so popular in the larger mainstream entertainment world. Think of how The Walking Dead, Saga and other titles have not only become comics bestsellers but raised the profile of the entire industry, before even getting to adaptations in other media.

What is being sold here is a movie about women doing it for themselves. The three lead characters are turning to desperate measures in the desperate times they face and are making no apologies for it. In fact they are embracing the power they’ve seized and finding it provides the kind of security that relying on their husbands never could.

That message is pervasive, accompanied by visuals that reinforce the vibe of 1970s New York and the crime-ridden environment it was. The work Berloff put into both elements – the female power of the story and the recreation of the period setting of the story – is on display everywhere here, making it a compelling pitch even for those unfamiliar with the original material.

Warner Bros. released an official video for The Highwomen’s cover of “The Chain” that includes not only footage but dialogue from the movie.

Haddish showed up on “The Late Show” to talk about the movie and more. Common later was interviewed on “The Tonight Show.”

The production team was the focus of this profile looking at how they recreated 70s-era fashion and design.

Lots more interviews with Berloff about how and why she made the movie, including what challenges she faced along the way.