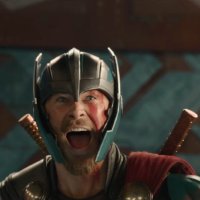 Amy (Kaitlyn Dever) and Molly (Beanie Feldstein) are best friends in the new movie Booksmart, from first time director Olivia Wilde. The two have been inseparable since early childhood, following all the rules and pushing each other to be their best, especially when it comes to following all the rules and succeeding at school, where they’re at the top of their class and ready to head to college.

Feeling like time is running out to blow off some steam and slightly discouraged by the fact that even the burnouts got into good schools, Molly convinces Amy to attend an end-of-year party and let loose for a change. Amy’s not wholly on board, but when they head out they not only have some fun but get into some of the trouble they’ve been avoiding all this time.

Amy and Molly are just looking at the camera with faces full of attitude and disdain on the poster, conveying how they view the world and deal with everyone around them. Copy above the title treatment explains that outlook further, labeling them as Getting straight As. Giving zero Fs.”

Just days before release a couple “homage” posters came out that put Amy and Molly in designs reminiscent of classic teen comedies Ferris Bueller’s Day Off and Clueless.

The first trailer, released at the same time the movie was debuting at SXSW, shows the audience how Amy and Molly are driven winners who follow the rules and destroy the competition, not risking anything that might keep them from success. That’s annoying to some people and eventually Molly decides they need to cut loose now that high school is over and show everyone how fun they are. Attending a party leads to all kinds of mayhem, of course, as the two get into all sorts of trouble.

About a month later a green-band trailer came out featuring many of the same scenes but with a bit of new footage thrown in hitting similar beats.

One final trailer – in both all-ages and restricted flavors – hit some of the same beats but the latter in particular adds even more of the outrageous antics Amy and Molly get into. There’s also a great line about how they “are not one-dimensional,” a nod to how characters like these in other movies often have a single definable trait.

Annapurna put up a site for the movie that continues the branding seen on the poster and elsewhere and has some of the marketing materials, but not a lot else.

United Artists partnered with Instagram to offer the studio’s followers on that platform the chance to get tickets to an advance screening of the movie. The partnership marked the first time Instagram has actively promoted a movie campaign like this and followed Wilde and the studio providing early looks to executives and others at tech companies in Silicon Valley.

The movie immediately become one that got people talking when it was revealed Wilde would be making her directorial debut with it. She spoke about it early on occasionally, including while at SXSW in 2018 with another film and while promoting Life Itself in late 2018.

A first look still accompanied an interview with Wilde where she talked about the story as well as the filming process and working with the cast. She talked more about the movie when she was named one of Variety’s 10 up and coming directors to watch this year.

Wilde was named one of the featured speakers at the 2019 SXSW, an honor that coincided with the movie’s publicity cycle. That SXSW 2019 premiere was recapped in a sizzle reel video showing Wilde not only promoting the film but also engaging in some of Austin’s finest food and shopping and other activities to help sell the movie to attendees. A short featurette came out in late April that had the cast praising Wilde’s efforts on the set and talking about the story.

Other interviews and profiles had Wilde sharing the influences she pulled from in crafting the story and how to easily increase inclusion in casting decisions while other stories called out the fact that smart girls at the center of a story like this is relatively unusual in the movie industry.

The first clip showed some of the ridiculous high school stuff Amy and Molly have to deal with. A second expanded on the pivotal scene where Molly convinces Amy to break the rules and go to a party for a change.

Featurettes from early May covered the fashion Amy and Molly as well as other characters sport and how Dever and Feldstein bonded on-set and how that bond informed the friendship between their characters.

There was another major profile of Wilde that addressed how she was tired of not being in control of her career. Feldstein received her own interview, with another focusing on her being Jonah Hill’s sister. A joint interview with her and Dever had the pair talking about their characters and the original nature of the story

Billie Lourd, who plays a classmate and social rival of the main characters, did some press in advance of release and was the subject of one of the handful of “Meet the Cast” videos the studio put out, with Dever also getting her turn.

Just before the movie came out Annapurna released the first six minutes of the film to give audiences a bit more of a taste of what to expect and show off the performances by the leads. That worked well in generating a a fair amount of positive buzz, at least among those who were already excited for the film. A major push that involved promotions from Ellen DeGeneres helped do likewise for general audiences.

One theme that emerged was how this movie was part of a trend of stories about lesbian teens, a character type Hollywood has been unsure how to handle or portray for a long while.

Annapurna has run a great campaign that positions the movie as a true original, one that won’t be like anything else currently in theaters. It leans a bit heavily on the notion of this being the “female Superbad,” something that makes the mistake of continuing to consider women only in their relation to men, but it’s also a useful shorthand for the audience to draw some inferences from.

Putting the three women – Wilde, Dever and Feldstein – front and center was the best decision the studio could have made, allowing them to define the movie’s brand and image in the minds of the public. The studio’s last minute push was designed for maximum impact, hoping to sway anyone who hadn’t already committed to seeing Aladdin this weekend and who might be eager for something original.

Wilde and the two stars shared some drinks and talked about the movie and how the project came together. The director also revealed how Feldstein was the only one she wanted playing Molly and her child’s involvement in production.

Screenwriter Katie Silberman was interviewed about the long journey the script took to production, including how she worked as producer to help keep things up to date. She spoke about the movie’s ending specifically here.

There were a couple more TV appearances made by Feldstein as well as another by Dever. Wilde also made a few more stops.

More featurettes were released by Annapurna, including one that positioned it among classic high school comedies, another with Wilde talking about how she’s one of a precious few female directors working at the studio level and how she wanted to be authentic to the teen experience and one that touted the efforts of casting director Allison Jones in assembling talented actors.

Additional interviews and features brought the cast and crew together to share stories from the set, introduce the supporting cast and an interview with costar Diana Silvers about her pivotal role. Dever and Feldstein were jointly featured again as well while Silvers got another profile later on.

The movie’s eventual box-office fate, which was underwhelming, a situation many said was due to Annapurna not fully committing to its marketing, a position I dispute, or engaging in a misguided release strategy. Sam Adams at Slate has a more nuanced take, pointing out that the landscape has changed significantly since Superbad came out in 2007 and that there really wasn’t a winning scenario for the studio when audiences seem intent on gravitating toward familiar spectacle instead of offbeat originality. Whatever the case, the movie got the attention and support of a number of celebrities who tried to rally their social media followers to seek it out.

Another poster was released well after the movie hit theaters featuring artwork and design that’s very much an homage to the kinds of school-based comedies that came before it, including Animal House and others.