You can read the rest of my recap of the marketing campaign for Avengers: Endgame at The Hollywood Reporter. My coverage of the PSA effort for Stand Up To Cancer also ran on Adweek.

For such a big movie, Marvel’s official website isn’t very informative, perhaps by design. You’ll find both trailers and some basic background on the film, including links to on-site blog posts offering readers a refresher on what’s come before, as well as a list of the promotional partners who helped draft off the movie’s buzz.

Of course the movie couldn’t help but come up as the cast was out promoting other projects, as Smulders, Jackson and others were all compelled to comment on it in some manner.

Ruffalo appeared on “The Tonight Show” to help debut the second trailer and answer (or not) questions about the movie. Duke also mentioned the movie while promoting Us last month.

A substantial profile on Evans had the actor talking about not only the future of Captain America and his part in the MCU but also the political stances he’s taken, with him saying staying silent wasn’t an option even if it meant alienating some portion of the audience and potentially costing him work.

The movie’s substantial length became the focus of many conversations in the last month prior to release following the revelation that it was clocking in around three hours, a full 30 minutes longer than Infinity War. The Russos rationalized the expanded time by pointing out the movie wrapped up the story that had been told over 20+ movies and featured dozens and dozens of characters.

A different subset of cast members appeared on “Jimmy Kimmel Live” each night the week of April 8-12, bringing clips and more. That started with Downey, Johannson, Hemsworth and Rudd followed by Renner and Cheadle. Around the same time they showed up on “Good Morning America.”

In the final few weeks of the press cycle, two themes emerged in terms of what the cast and crew were telling interviewers and talk show hosts:

An EW cover story reunited the original team for a retrospective interview and offered up other photos and details, but not too much.

At the end of the campaign there were profiles of Feige as well as his two long-time aides. The screenwriters were interviewed on how they worked to bring together so many different storylines and characters into something coherent as well as how they reintroduced some of the previously missing heroes. Feige and Downey Jr. reminisced on the beginnings of the MCU, when the idea of a shared cinematic universe was still a “best case scenario” and the bets were much more unsure.

Rudd was announced as the host of an upcoming episode of “Saturday Night Live.”

One final TV spot released the day the movie hit theaters played up the overwhelmingly positive reviews it was getting. A video had a bunch of the stars reminding the audience not to spoil anything for those who haven’t seen it yet.

Adding to the movie’s profile was the news from Fandango it now held the record for the most advance tickets sold.

Larson came on “The Tonight Show” and revealed she shot her first appearance with the rest of the Avengers – which appears at the end of her own movie – on a green screen with no one else around and no idea what her one line meant. Rudd also appeared to have some fun with Fallon.

The media agency Kantar estimated that all in, Disney spent close to $14 million on the marketing and advertising campaign, with TV buys making up a little over half of that and a good chunk of the advertising coming the day tickets went on sale a couple weeks ago. 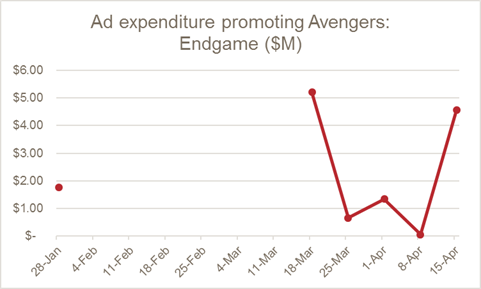 Another profile of Winston Duke mentioned this movie as well as his appearance in Us.

More details revealed here on the partnership with Fortnite.

Wayne Friedman at MediaPost points out how the majority of the movie’s campaign – and ad spending – came in the final month leading up to release. Jeff Beer at Fast Company also has his own recap of some of the movie’s cross-promotional campaign. There was also a look at how altered shots in the trailers kept some of the movie’s secrets hidden.

Google added a fun little tool for those who searched for “Thanos.”

Additional TV spots promised a “once in a generation event” and played up all the records the movie was breaking.

Another short promotional video shows how every movie has lead to this one while also reminding audiences not to spoil the ending for anyone. Some of the cast reminisced about their favorite memories as part of the MCU.

Brolin appeared on “Kimmel,” as did Sebastian Stan.

IMAX continued promoting the filmmakers use of its large-format cameras with another video.

Trolls continued to hound Larson, criticizing her junket appearances to the point where costar Don Cheadle felt the need to smack them down.

The writers and directors of the movie kept talking about various aspects of the story and characters.

Once the spoiler lid lifted more details about the story started to official come out, including a profile on the effects of Professor Hulk, who was also featured in a clip.

Gillan was the subject of two profiles focusing on her role in the movie.