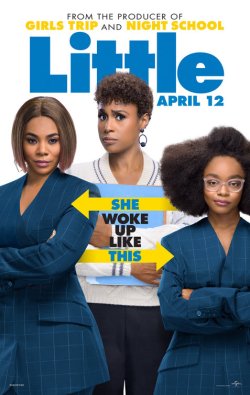 Little offers a new spin on a familiar tale. Regina Hall stars as Jordan Sanders, a high-powered executive who has achieved her success by taking a cuthroat, no-nonsense approach to everything in her life. Her assistant April (Issa Rae) bears the brunt of Jordan’s assault as her personal assistant.

Jordan’s unapologetic personality leads to an altercation with a little girl resulting in the girl wishing Jordan were little again. The next day that’s exactly what happens. Jordan, now pint-sized (and played by Marsai Martin), seeks out April’s help to try and fix or at least manage the situation. Hilarity ensues.

All three characters are shown on the one-sheet, with April standing between the different versions of Jordan. The copy – “She woke up like this.” – uses arrows to make the direction of the sentence clear, with “She ←” pointing toward adult Jordan and “this →” pointing toward the childish one. For her own part, April looks nothing but confused by the situation she’s been presented with.

Jordan, we see in the first trailer, is a pretty unreasonable boss, making outrageous demands on April’s time and patience. In fact she’s an abusive boss to everyone. One day a little girl wishes Jordan was a kid again, which comes to pass the next day. April winds up responsible for the new pint-sized version of Jordan, who continues to be obnoxious and abrasive even in a kid’s body. The two have to navigate all kinds of unusual situations from work to school and more.

We know Hall is funny, but Rae is the real winner here.

An edited version of the first trailer was used as a Promoted Tweet.

Postmates, the one promotional partner for the film, offered $.99 delivery fees for a limited time leading up to the release date.

A Snapchat filter shrunk your headshot down to kid-sized proportions.

The movie got some paid promotion during a recent episode of “RuPaul’s Drag Race.”

A clip from late March has April trying to figure out what happened to Jordan, who shows up in a kid’s body with no idea how she got there. Another clip featured Hartley’s teacher being ogled by the women while a third showed the first moment April meeting the newly young Jordan.

Rae was profiled in a piece focusing on how she got the job, what connection she found with the story and the path her career has taken to date. Another interview with her used the hook of her character being an assistant to ask her how she manages her life.

Complex premiered a new song by Chloe X Halle that appears on the film’s soundtrack.

An interview with Martin covered how she got involved with the project and more.

There were a handful of other interviews with the cast as well as appearances on various talk shows. All three leads appeared at BeautyCon to talk about the film and its story.

Late in the cycle there were a couple profiles of superstar producer Will Packer where he talked about the movie and his success in the industry. There was also more on Martin and the fame she’s achieved at a young age.

It’s easy to write this off as a retread of Big, and indeed it seems the project may have started off like that. But that’s not how it’s being sold and labeling it as such discounts what the campaign shows to be a unique approach to the idea of suddenly finding yourself in a body you’re not familiar with while your personality and mind remain intact.

Specifically, the campaign has repeatedly invoked the phrase/hashtag “#BlackGirlMagic,” a concept rooted in celebrating the power and drive of black women in all aspects of life and society. The co opting of that idea into the marketing embraces a more literal interpretation of that idea, but still represents the original meaning.

As a white man I’m not fully qualified (or even a little bit qualified) to weigh in further on that particular point, but I will say the marketing presents a funny movie that is working hard to be judged on its own merits. On that front the campaign succeeds.

The dominant theme of the coverage after release was that Marin is incredible as a producer and someone who’s tired of “firsts” and wants things to be normalized.

There was also an interview with screenwriter Tracy Oliver about the movie and her career aspirations and another with the production team about creating the visual style of the movie.