You can read my full review of the marketing campaign for Jordan Peele’s Us at The Hollywood Reporter.

Not much of note on the movie’s official website aside from the standard content on a page that uses Universal’s default design template. Links are there to the Facebook, Instagram and Twitter profiles, but there’s a missed opportunity here for some kind of “Meet Your Other Self” kind of feature that offers some skewed version of a visitor who uploads a photo or takes a quiz.

EW’s 2019 preview issue in December of last year featured a first look still from the movie along with comments from Peele about how he wanted to tell a monster story. Later on Duke was interviewed about this and other recent projects, careful not to say too much about the secretive story.

A couple months before the movie came out a trailer was released for Noire, a documentary about the history of black horror films that featured Peele, very much in line with the brand he’s developed. The director was the subject of a Rolling Stone cover story profile where he talked about this movie specifically along with what kind of stories influenced it and him and how he has seized control of his career.

Blum spoke about how Peele had upped the scare quotient since his first movie.

Around the time the movie was premiering at SXSW it was featured as the cover story on Fangoria featuring an interview with Peele conducted by director Paul Thomas Anderson. The movie’s screening there was accompanied by interviews with Peele and the cast about the racial identity issues raised by the story and comments from the writer/director about how he accepted a smaller budget in exchange for the freedom to tell the story he wanted and how he was gratified by the positive comments people had in response while also making the story’s political themes clear.

Duke was profiled about how the movie is the next step in an unconventional and often frustrating career. He also showed up on “Jimmy Kimmel Live” to talk about the film and his character.

Two new tracks from the movie’s soundtrack were offered alongside an interview with the score’s composer. The efforts of the production team were also put in the spotlight as they talked about how they created parallel characters to enhance the story.

Nyong’o appeared on a special edition of “The Daily Show” to talk about the fan art that was created. The interview was obviously a bit – possibly a paid one – and comes off as a riff on “Between Two Ferns” in how host Trevor Noah is making the actress uncomfortable and acting kind of rude and clueless. She was also the subject of two profiles about how powerful and influential she’s become in the last couple years and appeared on “The Late Show.” She later spoke about the challenge of playing two versions of the same character.

Peele continued his press tour to talk about the influences that powered the movie and what scared him as a kid well as the pressure he felt in the wake of Get Out to not be seen as a one-hit fluke. Duke also showed up on the talk shows to talk about filming. There was also an interview he did where he talked about the symbolism of the scissors that can be seen so prominently in the marketing as well as what messages he wanted audiences to take away from the film.

There were continued profiles of the main cast in the press, including both Evan Alex on his own and one with him and Shahadi Wright Joseph.

Duke was also the subject of quite a few additional profiles and interviews. 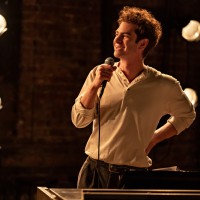