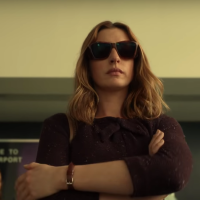 Julianne Moore plays the title character in this week’s Gloria Bell. Gloria is a woman who is out there living life, at least after she finishes her run-of-the-mill day job. At night she heads out to dance at one of L.A.’s many clubs. She’s comfortable in her life and, since she’s divorced, doesn’t have to worry about what anyone at home might think.

While out one evening she meets Arnold (John Turturro) and the two develop a romantic connection. After enjoying her freedom and lack of ties, though, dating is difficult for Gloria and various issues start to come between her and Arnold, issues the two will have to overcome to make it work.

We get everything we need to know about Gloria on the poster, which shows her enjoying the breeze as she stands up in a moving car. She’s a carefree spirit, we’re told, and we’re going to follow her as she moves through her life. What’s most notable is that this is a woman who’s 30 years older than the typical character we see cutting loose like this, but there are no apologies offered. She is who she is and she’s going to enjoy every minute she can.

We meet Gloria in the first trailer and see she is a force of nature, optimistic and loving and patient with everyone around her. One night she meets Arnold and the two begin dating, which is going fine until he meets her ex-husband, which causes problems in the relationship.

The main takeaway from the trailer is the Julianne Moore is a gift from above and we don’t deserve her. We see the pull and push that’s common to most romantic comedies, but the fact that it’s too reliable pros like Moore and Turturro in the leads immediately kicks things up a notch and promises what might be a standard story will be something more.

A24 offers just the basic information on the page for the movie, including a trailer, synopsis, cast/crew list and the poster. There are also links to Facebook and Twitter profiles, but that’s it.

Nothing I’ve seen or heard about.

The title was picked up by A24 ahead of its previously-announced premiere at the Toronto Film Festival.

In the last few days before release Moore appeared on late-night and morning talk shows to discuss the movie and her character.

Moore is, of course, the main attraction here. The story is interesting and we could certainly use more movies like this that feature women over the age of 30 having the time of their lives free of entanglements. It’s not sad about her choices, but revels in them. With the focus on the actress and the unique story she’s part of, it’s a good – albeit small – campaign.

Moore talked about working with Turturro and the production as a whole at the movie’s premiere. She was also interviewed more about what made the role attractive.

Turturro finally appeared on late night to talk about the movie.

The fact that the story focused on the carefree life being lived by a woman over 50 was notable and noted.