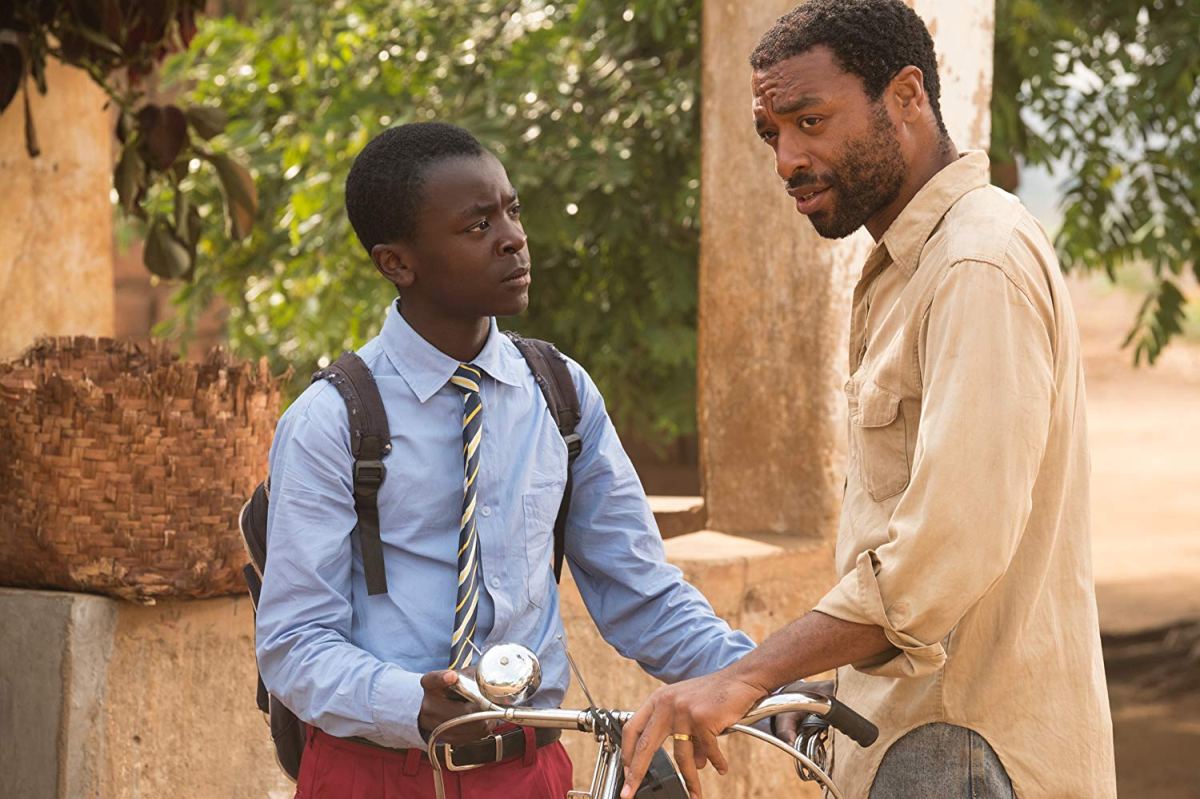 Chiwetel Ejiofor wrote, stars in and makes his directorial debut with this week’s Netflix-exclusive release The Boy Who Harnessed The Wind. Based on a true story, the movie focuses on William Kamkwamba, who wrote the source book and who in the film is played by Maxwell Simba. William is a young boy who lives with his family, including his father Trywell (Ejiofor), in the small African country of Malawi.

When drought hits the country and people start dying, William’s family – along with everyone else – prioritizes survival over education and other goals. But William begins to see there may be a way to help everyone by finding a way to pump water into the farmland and sets out to bring irrigation to his village.

The makeshift windmill William erects to save his country and its people looms to the side of the poster, with William himself at the bottom holding it up. His father stands off to the side amidst a barren and dying field of crops desperately in need of water. The movie’s status as being based on a true story as well as its appearance at Sundance are both called out.

William is a determined young man, we see in the trailer, one whose family has made his education a priority. Those priorities change when their country experiences a devastating drought and everyone is dying or going hungry. He gets the idea that refurbishing an old pump he finds in the trash can bring much-needed water to the crops that are drying up, but his desperate father wants him to focus on other things. Eventually William overcomes those objections, leading to hope for the village.

Nothing, though the movie has received some support on Netflix’s branded social profiles.

Nothing I’ve seen, though it’s likely there has been or will be at least some online advertising done.

The first big news cycle for the movie came when Netflix acquired distribution rights in mid-November. A couple months after that the company brought it to the 2019 Sundance Film Festival, where it garnered decent buzz.

While there Ejiofor was interviewed about shooting in Malawi, the importance of diversity and inclusion in casting and what it was like to watch the finished movie and the pressure he felt his first time behind the camera. A few other interviews surfaced as well.

It’s a very well put-together campaign that rightly puts Ejiofor at the forefront of the publicity while shifting him back a spot in the marketing – the trailer and poster in particular – so newcomer Simba can become the focus. It’s William’s story being followed, after all, so it’s important the audience see him as the central figure in the events being portrayed.

Missing, though, is something that’s seen a lot in other campaigns for similar movies; Any connection to the real life events and people. It would have been nice to see some promotion of Kamkwamba’s book or information on the era depicted, maybe along with some call-to-action to contribute to Charity:Water or other NGO with a mission relevant to the story.

That’s where Netflix’s consistent strategy to not use stand-alone websites or social profiles seems short-sighted. Telling a story like this is important, but it’s just as important to give the audience some way to get involved once they’re aware. The movie itself may contain this kind of CTA, but it’s not in the campaign and that’s a missed opportunity.

Netflix offered an extended behind-the-scenes look just as the movie was becoming available on the service. Another had Ejiofor talking with the real-life William about the latter’s story.

Ejiofor appeared on “The Daily Show” to talk about making a uniquely African movie.