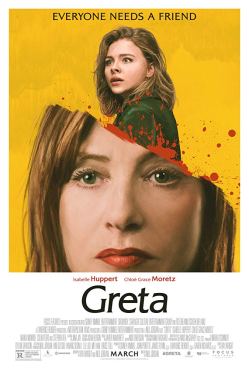 This week’s new release Greta tells a familiar story, one of a young woman who through a series of events winds up befriending an older one. In this case the younger is Frances (Chloë Grace Moretz) and the older Greta (Isabelle Huppert), with the two coming together when Frances finds Greta’s purse abandoned on a train and returns it to her.

After some time Frances begins to realize the circumstances that brought them together may not have been as coincidental as they first appeared, and Greta’s behavior becomes increasingly dangerous as she refuses to be ignored and abandoned. That’s bad news for Frances, as Greta’s plans and motivations become increasingly clear as well as disturbing. 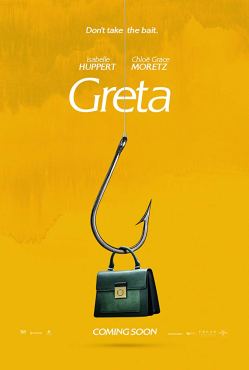 “Don’t take the bait,” the audience is warned on the first poster, which shows a nice handbag being caught by a fishing hook. It’s a simple image and copy combination, but it comes together to present something intriguing and mysterious.

The second is a bit more on-the-nose, showing Greta’s head split open at the top with Francis popping out of it while the copy here reads “Everyone needs a friend.”

Frances discovers a handbag left on the subway and returns it to Greta, its owner, as the first trailer opens. The older woman invites the younger in to repay her for her kindness. The two go on to form a friendship but Frances discovers this may not have been a coincidence that brought them together. When she tries to separate herself, Greta goes full-on stalker as Frances finds herself harassed at work and drugged and kidnapped. It’s creepy as heck but shows the interplay between the two actresses may be the key selling point for the movie.

The official website offered by Focus Features follows the studio’s usual template, presenting the trailer when you first load the site and then letting you scroll down to view production photos and read cast/crew bios. Links to the movie’s Facebook, Twitter and Instagram profiles are also at the top of the page.

Online ads using elements of the key art – particularly the image of Moretz – began running in early February, shortly after the trailer was released.

The studio partnered with LA Times Studios on a limited-run podcast titled “Obsession” that explored what makes people become infatuated with another person. The movie sponsored one of the escape rooms at Breakout Atlanta, offering those who completed it movie posters and other swag.

An appearance at the Toronto Film Festival resulted in Fox Searchlight picking up distribution rights rather quickly. An extended clip showing the restaurant scene glimpsed in the trailer was released in early February.

A video offering signs you have a clingy friend kind of made light of the situation presented in the story, but the studio was obviously going for a thing here even if it didn’t quite land. Two clips followed that.

Moretz was interviewed about her character, the story and the experience of working with Huppert while everyone spoke about similar topics at the movie’s premiere. She also appeared on “Good Morning America.”

Focus Features is trying to play on the ideas of obsession pretty heavily in the campaign, from the trailers to the sponsored podcast and more. That’s a good message to send, and it’s interesting that it’s not a romantic, heterosexual obsession being depicted but one between two women that’s free (at least based on what we see here) of any sexual component. Instead it’s just about friendship, companionship and understanding, all of which can be powerful – and dangerous – motivators.

Moretz and Huppert, particularly the former, are bold personalities to use in the campaign, offering audiences a female-centric drama that has twists and turns that are well-telegraphed in the marketing but still promise some surprise to viewers.

There was a good profile of costar Maika Monroe.

Moritz made a few more media appearances like this. She also did a featurette playing “This or That” which was thematically tied to moments from the movie and one that had her looking back at her first role, as did Jordan later on. There was another that examined obsession and stalking in previous movies.