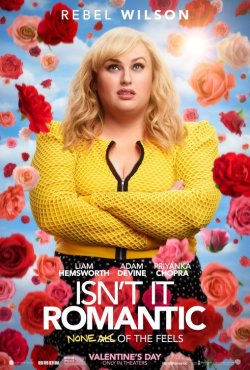 It’s tremendously interesting that at least a few filmmakers of late have chosen to deconstruct the traditional romantic comedy by introducing some kind of brain trauma or delusion to female characters. Last year there was I Feel Pretty, which (at least based on the marketing) tied body image to mental acuity and this week there’s full-on fantasy in Isn’t It Romantic. Both movies star women who don’t look like Katherine Heigl did in 27 Dresses, is all I’m saying.

In this week’s release Rebel Wilson plays Natalie, a woman who has become completely disenchanted when it comes to romance and love. One day, after sustaining a head trauma (of course) she finds herself in an alternate reality where everything is playing out like the romantic comedies she loathes so completely. She meets a handsome stranger (Liam Hemsworth) and is stuck in all the PG-13 cliches that make those movies so predictable but sometimes frustrating, with true love being the only way out.

The first poster arrived in late November, showing Wilson standing and looking slightly annoyed by all the flowers falling magically around her. That gives the audience a decent idea of the attitude the movie will take toward romance and love, an attitude that’s reinforced by the copy that reads “All of the feels,” only with “All” crossed out and “None” scribbled next to it. A series of posters showing each of the major actors in action against a blank white background came next and were less than inspiring.

I really don’t get this. Rebel Wilson is funny, but why create a whole movie around fat-shaming her? Why create another movie after I Feel Pretty where the only way a woman can feel pretty is by giving her some sort of delusion or mental illness? Cause that’s just what the trailer is selling.

You can see the tropes of the genre on display as targets to be deflated, while at the same time they’re completely embraced. It’s a weird mix that doesn’t come off well.

You’ll only find the most basic of information on the website Warner Bros. created for the movie, which organizes all the usual content in the same template the studio has been using for a while now.

Nothing on the paid front that I’ve come across, though it’s likely there were at least some TV spots, billboards and online ads run to support the release.

There are four promotional partner companies listed on the official site:

EW offered the first look at the movie in mid-October. Shortly after that Wilson created a bit of a stir when she made comments about her being the first plus-size actress in a romantic comedy, something that erased Queen Latifah and the couple similar movies she’s been in over the last several years, as well as lots more. She reportedly even started blocking black critics on Twitter, though she eventually apologized to these missteps and offenses.

The movie’s three female writers were the subject of a feature that focused on how it reflected their experiences growing up watching the romantic comedies of the 90s and are finally able to make their own.

A Fandango-exclusive clip from early February offers an extended look at a scene that takes place in a dance club, including a very poor cover of Whitney Houston’s “I Wanna Dance With Somebody.”

An interview with Devine allowed him to talk about the movie a bit as well as past projects and his involvement with Captain Morgan.

Wilson made a few TV appearances in the last few months, including on “Ellen” and “Tonight Show” to promote the movie. She and Hemsworth showed up on “Good Morning America” together while much of the press around the latter focused on his marital status.

Maybe the movie itself is more clever than what’s on display here, but the campaign doesn’t sell it well, instead positioning it as another in a series of films where the only chance women have to be happy is through some form of delusion. Wilson is very funny but this doesn’t allow her to show that almost at all as she almost solely reacts to what’s happening around her instead of taking any action on her own. Not expecting a whole lot.

DeVine showed up on “Kimmel” to hype the movie. Jonas appeared on “The Tonight Show” to engage in stunts and skits.