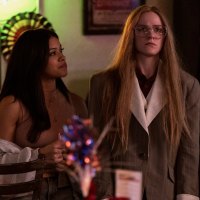 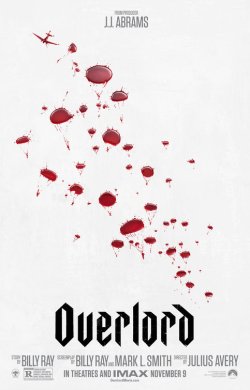 The well-known story of D-Day, the Allied invasion of France in World War II, has been the subject of many movies over the decades. The new film Overlord offers a new twist on the familiar, though.

The story follows a team of American paratroopers dropped behind enemy lines before the invasion to pave the way for the coming troops. They head to a small village with a Nazi research facility and quickly find more than they were briefed on. Specifically, they discover human experimentation that has resulted in terrifying creatures they must fight their way through in order to survive.

The first poster shows an obscured face that appears to have flakes blowing off it, with the title treatment in the front. Abrams’ name appears at the top while everything about the design screams that this is a horror flick of some kind. 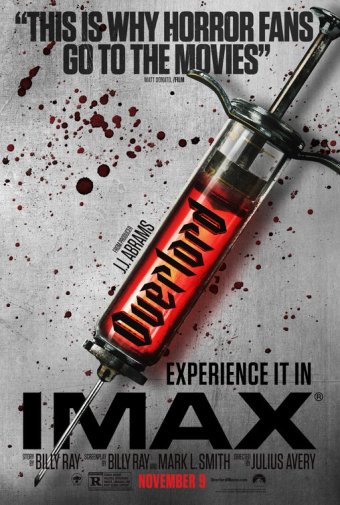 Parachutes fall like drops of blood from the plane overhead on the theatrical one-sheet, which received an interesting rollout on social media. The studio used Instagram to slowly reveal the poster, with a link to OverlordMovie.com/1000yeararmy in one of the grid tiles. People who clicked that were instructed to DM “Aidez moi” to the account to receive a response that continued the unveiling of secrets and clues as to the story of the film.

Blood is also the central component of the IMAX poster, though in this case it’s mostly confined to a vial that’s sitting on the ground. A couple additional posters were created by different artists for specific distribution, one for Gallery 1988 and one for Dread Central.

The first trailer dropped just before Comic-Con 2018. In it we see a fleet of planes taking part in the invasion of Normandy, all of which come under enemy fire that results in some being blown out of the sky and soldiers being scattered everywhere. One group that’s separated from their unit decides to investigate a compound they come across. They soon find it’s where German scientists are engaging in various experiments to enhance or change people to make them more effective killing machines, leading to all sorts of violent encounters with those who have been transformed.

A second short trailer from early October cuts out some exposition, dropping the viewer immediately in the squad’s investigation of what’s happening inside a mysterious church behind enemy lines. When one of their number is killed, they inject him with a vial of unknown liquid that brings him back to life, but also changes him. Lots of action and shooting follow as it sells a body horror movie set during WWII.

The official website doesn’t offer much beyond the ability to buy tickets. There’s the usual trailer and such, but not much else.

An exclusive first-look for those seeing opening weekend showings of The Nun on IMAX screens was announced days before in an attempt to generate additional interest in both movies.

Online ads used a mix of full-motion video and elements of the key art, especially the parachutes falling from the sky like drops of blood. The trailer was used in promoted post ads on social media.

Publicity for the movie started when it was revealed this would be the fourth installment in the loosely-connected Cloverfield franchise, news that came before the third movie even came out. It was subsequently moved all over the release calendar. When The Cloverfield Paradox was dropped by Paramount and quickly picked up by Netflix, the studio confirmed Overlord was still thiers and would be coming to theaters later in the year.

Later on during Paramount’s CinemaCon presentation Abrams appeared to reinforce that the movie would be coming soon and clear up rumors, stating clearly that it was *not* connected to the Cloverfield universe. The movie was also part of the later CineEurope presentation from the studio. It was later announced as being among the lineup of films appearing at Fantastic Fest, an appearance that generated some very positive buzz and word of mouth.

A featurette was released in late October that had Abrams and others talking about the story and how the movie presents something new to both the war and horror cinematic genres.

Adepo appeared on “Kimmel” a couple weeks out from release to talk about the movie and what he did to prepare for the role. He and other members of the cast did other talk show stops and participated in online Q&As and so on.

This may not be a Cloverfield Universe film, but it’s clear Bad Robot, the studio producing the movie, is still up to its old marketing tricks. That has worked to raise the profile of the movie, particularly among horror fans. It’s all added up to create a fun and hair-raising campaign that’s filled with “Wait, what’s going on?” questions with precious few answers being offered. In a time where campaigns try to lay out entire story arcs, that’s a welcome change.

IMAX released a brief promotional spot featuring the cast and crew. There was also a featurette focusing on Mathilde Ollivier.

Adepo was interviewed about his character and how he plays into the movie’s story.