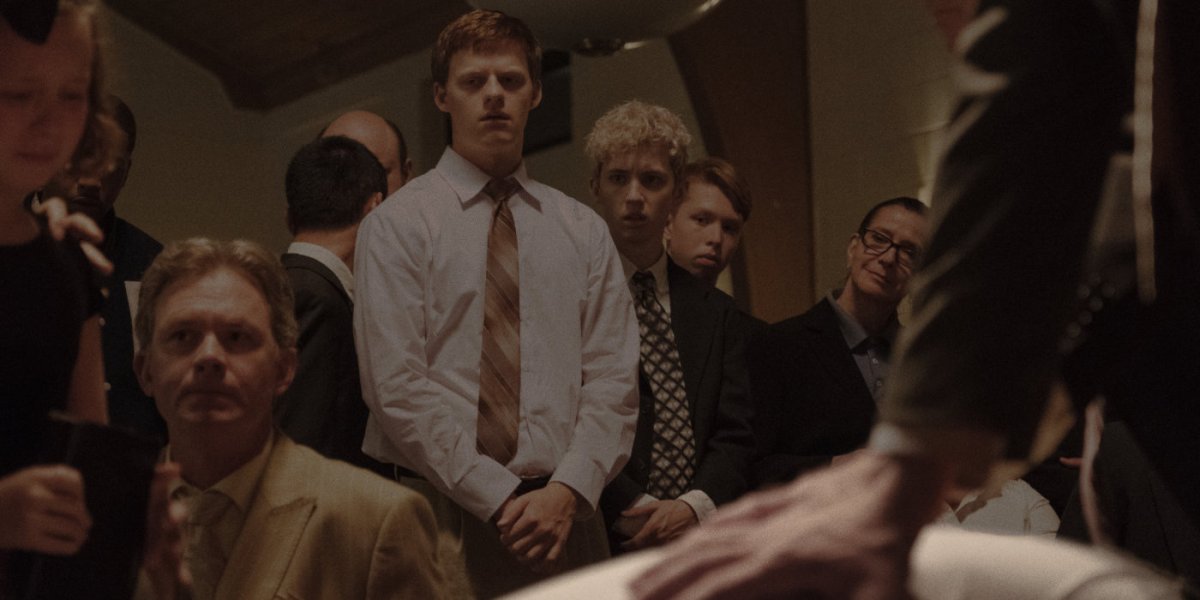 The latest in a series of movies about parents dealing with their child’s sexuality, Boy Erased is directed by Joel Edgerton and stars Nicole Kidman and Russell Crowe. They play Nancy and Marshall Eamons, parents of Jared (Lucas Hedges), who is gay.

That may not seem like a bad thing, but it is given that Marshall is a Baptist preacher. Jared is outed by his parents without his consent, after which he’s sent to controversial gay conversion therapy. So the story is about accepting – or not – who your kids are and the attitudes around whether that’s acceptable to parents or not.

Jared is shown in either deep contemplation or prayer on the first one-sheet, a reassuring parental hand seen on his shoulder. The names of the cast as well as the fact it’s based on a true story. The tagline at the top reads “The truth cannot be converted,” making the theme of the story explicit for the audience.

The second one-sheet places Jared between and in the background of his parents, an illuminated cross on the wall in the back. The same tagline is used and it’s clear that he’s causing strife in his family and division between his parents.

Jared has finally found the courage to come out to his parents in the first trailer, a declaration they just don’t accept. So they send him to a church-approved conversion camp where he’s told homosexuality isn’t natural and that God will never love him as long as he and the others insist on this identity. While there are plenty of scenes from that camp, the main focus of the trailer is on the dynamic between Jared and his parents and the conflict they feel between their love of their son and their love of God.

It’s a serious and sober-minded drama being sold here, one that has a lot of raw emotions on display. I’m hoping the story doesn’t paint all Christians as holding to the belief that homosexuality is an error to be corrected but is a bit more nuanced. Still, excellent performances all around are on display.

A second trailer was released just days before the movie was supposed to hit theaters that shows a lot more of what’s going on, from Jared coming out to his parents to them sending him away to be “fixed.” What’s different here is the extent to which his mother comes to his rescue when things clearly aren’t going right. The trailer ends with statistics about how many people are being held in therapy like what’s shown here and a link to the site to learn more.

Focus Features gave the movie its usual website treatment, opening with the trailer and giving way to full-motion video on the splash page. There don’t appear to be social profiles for the movie itself, just the studio. Scroll down and you’ll see some photos and an “About” synopsis but that’s it.

I’m not aware of anything paid on behalf of the movie, but it’s possible I’ve missed something.

Some of the first real publicity for the movie came when Edgerton and Hedges showed up at CinemaCon to help Focus Features show off a bit of footage and talk about why they found the story so compelling. Edgerton later was interviewed about what attracted him to the true-life story and how he went about conveying the difficult subject matter.

An interview with Hedges at the same time as the Telluride appearance had the actor talking about the movie and his career as a whole, as well as how this role relates to his own journey to understand his sexuality more fully. Edgerton spoke more about the kind of story he wanted to make and why he made this movie at this time.

At the movie’s premiere, the real Jared’s mother spoke about how the story is personal to her and how seeing it on the screen felt to her.

Costar Troye Sivan hosted a couple preview clips, one released on National Coming Out Day where he talked about his own experience coming out and one a PSA for StopErasing.com that advocates for the rejection of conversion therapy. Another had the cast celebrating “Spirit Day” to fight against bullying.

A video for the original song “Revelation” by Sivan and Jonsi came out in mid-October to help tap into the former’s fanbase.

Edgerton spoke about his opinion of conversion therapy and what prompted him to make the movie and tell this story.

As I stated at the opening, this is the third or fourth movie this year alone to tackle the idea of gay conversion therapy and similar topics. That means it has some competition for people’s attention. There’s nothing here that presents something wholly unique about this particular movie other than that it’s based on a true story, but even that has been done before.

That’s fine as it’s not that this isn’t a story that should be told and it’s certainly coming at a time when issues of identity are still at the forefront of our national conversation. It’s just that it may get lost in the shuffle and overshadowed by other events.

Edgerton spoke more in this interview about the process of making the movie and the responsibility he felt to tell the story. He also expressed some regret over not selling the movie to Netflix, saying that would have allowed more people to see it more readily. Hedges was also interviewed about some personal issues and how this movie fits into his other recent work. He also showed up on “Late Night.”

The Advocate was given a series of exclusive posters, a nice media partnership given the story’s subject matter.

The filmmakers helped create an original podcast series titled “UnErased” that offered insights into the history – and current practices – of the controversial gay conversion therapy that’s at the center of the film’s story.

Kidman noted this is one of two recent roles she’s taken where the character is a mother in a lot of pain over the choices they’ve made.