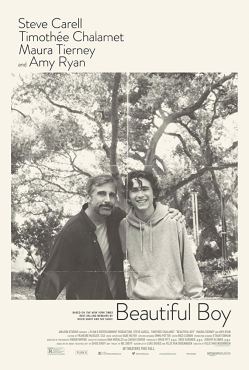 Steve Carell plays David and Timothée Chalamet his son Nic in the new movie Beautiful Boy, based on the real life story told in the book of the same name. David is a loving father who wants nothing but the best for his son, something that’s difficult given Nic’s recurring substance abuse problems that keep him on the streets, in one rehab clinic after another and which cause nothing but friction between the two.

So it’s both a movie about the problems caused by addiction and the dynamic between father and son and how that relationship influences so many things. It looks emotionally devastating.

Nic and David are shown in better times in a black-and-white photo on the first poster. Aside from the cast list at the top and the title at the bottom, the main element here is the reminder that this is based on a true story, mentioning the book that inspired the movie.

Before the first trailer came out there were two short videos released to whet people’s appetites, one that has Nic arguing with his father that he just wants to be understood, and one that takes a similar approach but is more gentle in its presentation.

That trailer opens with the same scene shown in the first clip before alternating between footage of Nic and David struggling to understand each other as adults and them being the idyllic father and son pair when Nic was younger. The problems they have with communicating and seeing the world from each other’s point of view are the dominant themes in the trailer as we see Nic just want to be accepted for who he is and David insist that he’s better than the issues Nic is dealing with. Carell and Chalamet look to be giving high-energy performances here, but we don’t get much of the characters played by Tierney and Ryan, which is too bad.

The second trailer continues highlighting the dynamic between Nic and David, showing that at least in part Nic’s problems stem from feeling the need to live up to his father expectations and love and I don’t think I’ll be able to watch this movie.

The website for the movie has both trailers under “Videos,” along with a “Synopsis,” “Gallery” and plenty of prompts to buy tickets and Twitter, Facebook and Instagram links. What’s nice to see is that not only are the books by Nic and David Sheff available to purchase for those who want to explore more but there’s also a link to a seperate site with contact information for those who may be dealing with addiction in one way or another. That’s just the kind of real world connection that should be on more sites for movies that deal with real issues like this.

The trailers have been used as paid posts on social media but I haven’t seen and can’t find any online ads or TV spots.

With this being Chalamet’s first post-CMBYN project to go through a full marketing cycle, the release of a first still was greeted with plenty of attention and interest. Later on Chalamet and Carell appeared at CinemaCon to debut footage and talk about the story with the executives and press in attendance.

The movie was announced as one of those screening at the Toronto International Film Festival, with the cast and crew appearing there to partake in Q&As and screenings. A short while later Chalamet was interviewed in a piece where he talked about the challenges of shooting such an emotionally raw story.

While in Toronto the whole cast did a handful of interviews and Q&As, allowing Chalamet to talk about how he lost a lot of weight and had to go to some difficult emotional places for the role, how he geeked out at working with Carell and Ryan since he’s a massive fan of “The Office” and how he’s become friends with the real person he’s playing in the film and received encouragement from Nic.

Meanwhile both Carell and Chalemet hit the talk shows to promote the movie.

Well, as I said at the outset, that looks like it will emotionally wreck me. Even putting aside the issues of addiction and substance abuse that are obviously key to the story, the theme of paternal expectations being so pervasive that Nic has to escape however he can from under their weight seems…rough. Even if the audience can’t relate to the substance abuse, they will likely find the crushing expectations resonate.

The movie has some decent buzz coming out of its festival screenings and benefits from what seem to be strong performances from Chalamet and Carell. This seems like it’s the kind of release that could gain some word of mouth among early audiences and expand into a hit in the last part of the year.

The cast and crew talked more about the difficult emotional material they tackled at the movie’s premiere.

Another clip expanded on the diner scene that’s shown in the trailers and was one of the first teasers released and one more showed the way Nic and David had grown apart.

There’s a new featurette with the stars of the film talking about the emotional impact of the story.

Chalamet appeared on “The Late Show” a few weeks after the movie hit theaters.