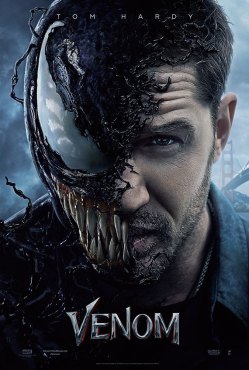 My full recap of the marketing for Venom, the sequel to the 2017 sci-fi thriller Life with Ryan Reynolds, Rebecca Ferguson and Jake Gyllenhaal, is up at The Hollywood Reporter. In this installment, the mysterious alien discovered by the scientists in the first movie attaches itself to a reporter played by Tom Hardy, running rampant on the streets of San Francisco.

Sony’s official website for the movie features the usual mix of trailers, a story synopsis and a gallery of stills. In addition to that, “Join Venom” is just an email signup form while “Become Venom” wants you to upload a photo into the poster to see what you’d look like with half your face taken over by a symbiote. There’s also “Play Game” which is a simple online running game and “Comic Book,” a digital comic that seems to recreate a scene shown in the trailers. Links to the movie’s Facebook, Twitter and Instagram rounded out the site’s content.

Entertainment Weekly’s San Diego Comic-Con issue had an interview with Hardy that was full of information. Not only did the actor talk about what drew him to the role – the cool costume and how the character wrestles with dual natures – but there was also confirmation the movie takes place in a completely separate world than the new Marvel/Sony co-managed Spider-Man continuity. On that point, Chris Lee at Vulture went in-depth on the sometimes conflicting messages sent by different studio executives and what plans Sony has – or at last has had – for a Spider-Man Cinematic Universe of some kind.

At SDCC the cast as well as director Ruben Fleischer appeared on a panel to show off new footage including a fight Venom has with fellow symbiote Riot. Hardy went slightly off-script when he said he’d love to see his Venom fight Tom Hardy’s Spider-Man, but that’s hardly an official statement, just a bit of speculation and fan pandering, which is understandable.

Williams got a significant profile in Vanity Fair that covered all of her career, including how taking a part in this movie was an effort to open herself up to bigger experiences and environments. Soon thereafter a similar profile of Hardy in Esquire explored the actor’s background and offered a few more insights into Sony’s plans for their Spider-Man-related characters.

Those plans were expanded on by Sony itself as the studio revealed it did indeed have plans for plenty of follow-up films featuring Venom and other characters under its management. Those plans included keeping this movie at a PG-13 level so as not to damage potential spinoffs or extensions. Another new photo was released around that same time.

Fleischer later spoke about how he wanted to make a movie in the vein of the horror films that also featured comedic elements from the 1980s. Ahmed was interviewed about being able to play a character who’s not specifically defined solely by his race and then appeared on “Kimmel” to talk about making the movie.

Jenny Slate showed up on “Kimmel” to talk about the movie. Another interview with Williams once again covered what motivated her to take such an unusual role, at least for her.

After a few online reviews had mentioned the strange pronunciation of “symbiote” in the first trailer had been fixed in the final film, something noted by the media.

I can’t believe this is a real movie that’s happening for a number of reasons. Most notable is the fact that no one involved seems to be capable of committing to anything.

They want it to be an anti-hero movie to tap into some of that sweet Logan and Deadpool money, but they also want it to be PG-13 and so won’t go too far down that road. They want to tap into the Spider-Man cast of characters, but because they’ve already rebooted that franchise twice and currently share custody, dropping Tom Holland off at McDonald’s on Fridays after school, they can’t fully do that.

It just exists in such a grey area that the movie seems like it will serve no one, at least based on the marketing.

Tom Hardy and Riz Ahmed were interviewed together about not only the movie but how it’s the capstone to a friendship the two have had for a decade now.

Eminem appeared on “Kimmel” to perform the movie’s title rap from the Empire State Building.

Sony released its own Yule Log video for Christmas featuring Venom sitting by a roaring fireside. 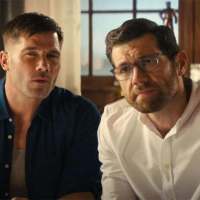