Robert Redford is one of the most charismatic, charming and talented actors to ever grace the silver screen. With 78 acting credits to his name since 1960, he reteams with director David Lowery for the second time in this week’s The Old Man and The Gun.

In the movie Redford stars as Forrest Tucker, a man who’s enjoyed a long career as a generally non-violent, gentlemanly robber of banks. He’s still having fun with his chosen vocation, but feels time running out on him. One day he meets Jewel (Sissy Spacek), a widow whose path he crosses while on the run from the authorities. The two develop a romance as Forrest eludes the police on his tail, led by Detective John Hunt (Casey Affleck).

Tucker’s face is obscured as he places a fedora on his head on the poster. It’s a simple poster, just showing him walking along carrying a case (presumably of money) and looking dapper. An old-fashioned typeface is used for the title treatment and other copy, including the tagline that qualifies the movie, admitting to the audience that “This story is mostly true.”

Redford breezes through the first trailer (and likely the entire movie) as we meet Tucker and see how while he may be a bank robber he’s exceedingly polite about it, always leaving his victims with a positive sense of the experience. The trailer is structured primarily around Tucker meeting Jewel and the two of them starting up a late-in-life romance, her eventually accepting what he does for kicks. There’s also the search for him by police, but that almost seems secondary.

We don’t deserve Robert Redford. I mean…it’s not even fair.

The second trailer hits many of the same story points in showing how Tucker so nonchalantly robs banks for the thrill, not necessarily for the money. Different here is the focus on the other members of his crew, while the relationship with Jewel is relegated to just a couple scenes showing their cautious flirtation and romance. It’s got the same vibe, though.

Fox Searchlight’s official website for the movie has some basic information like the trailer, a story synopsis, cast and filmmaker profiles and details on release dates. There were also Facebook and Twitter profiles where the studio shared updates on the movie.

The first still from the movie was accompanied by news of it finally getting a release date. Later on Redford made comments about how this was going to be his final acting job. He confirmed that decision closer to release, saying the time had simply come for him to “escape” from the lifestyle and work.

The movie was announced as one of those screening at the Toronto International Film Festival as well as the London Film Festival. It also scored the prestigious opening slot at the Telluride Film Festival.

Redford shared how and why he says “yes” to a movie and why he said “yes” to this one while Lowery talks about how he worked to get that answer from the actor.

There was also coverage of how the movie started out its life as a 1999 feature in The New Yorker that profiled the real Forrest Tucker and his exploits. That history meant it was one of the movies produced by Conde Nast Entertainment, a division of the publishing company that’s had trouble taking off since its inception about five years ago but which was hoping this year would bring a turnaround.

Redford and Spacek, either on their own or together, appeared on “CBS Sunday Morning,” “PBS Newshour,” and “The Today Show” among other shows.” Costar Danny Glover, who plays a member of Tucker’s crew, was also interviewed about working with Redford.

Redford later expressed regret for bringing the focus of the publicity for the movie and his reported retirement, saying he shouldn’t have drawn attention away like that. It wasn’t the walk-back some sites framed it as, just him saying he should have kept his mouth shut in the moment.

Redford’s easy, confident charm has brought him through a career that’s lasted over 50 years. The campaign here shows that persona is just as strong now as it was when he broke out as a major star in the late 60s, when he was a king of 70s cinema, when he was the romantic elder statesman in the 80s and the commanding veteran of the 00s and 10s.

Mostly what’s shown is the story is a great vehicle for Redford to be everything he can be. It’s a silly kind of story that could be played for laughs in the wrong hands, but the marketing shows the actor and his costars, under Lowery’s direction, play it straight, pulling the drama out while still allowing the sly wink and smile the lead is best known for.

I missed this story the first time around, but Sissy Spacek shares a charming anecdote about meeting Robert Redford that’s 100% relatable.

Director David Lowery says shooting the movie in Texas really helped capture the authenticity father story, even if most of it was shot in Ohio as a stand-in for Texas. He and the cast appeared in a featurette where they all talked about the story and characters. Another interview had him talking more at length about working with Redford for the second time, as did this one.

More from Spacek here and here, the latter coming to my attention thanks to an email blast from Conde Nast, the media company that helped produce the film.

Additional TV spots like this have been released to keep up audience interest. And a new featurette focuses on how the movie reunited Redford with his longtime stunt double.

Lowery shares some expanded thoughts on the role guns play not just in the story but in the world along with more comments about working with Redford again and more. 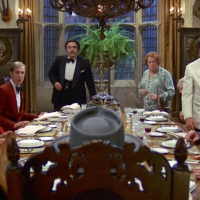