The Toronto Film Festival has, as they say, now come and gone. The screenings are over, the reviews have almost all been written, some deals signed and so on. Critics, weary from the crunchiest part of festival season, are nursing various ailments picked up on the road and are preparing for the movies they saw to eventually hit theaters between now and some unknown point in the future.

As I watched the takes stream in from afar I was, as usual, jealous of everyone being able to see a bunch of movies that looked interesting and provocative. Amidst all the interviews, profiles, reviews and other write-ups I saw that Toronto showed there were three topics filmmakers seemed to be focused on at the moment.

It’s obvious that we as a society are struggling with just what it means to be famous and how that is not only achieved but then dealt with by the individual. Four films screened at Toronto that tackle this, seemingly from different angles: A Star Is Born, Vox Lux, Her Smell and Teen Spirit.

In A Star Is Born, the latest version of a long-lived story in Hollywood, Bradley Cooper plays a music industry veteran who plucks Ally (Lady Gaga) out of obscurity and into stardom. So the movie deals with how the industry isn’t always fair about who it chooses for success and that it sometimes takes an outside force to bring deserving talent to light.

Vox Lux shows a superstar whose fame is more a matter of circumstance. Natalie Portman plays Celeste, whose singing career we see at three stages: sudden rise, national acclaim and comeback after a setback. The movie is written and directed by Brady Corbet and was just picked up by NEON.

Elizabeth Moss plays an aging punk rocker in Her Smell, which generated a lot of positive buzz at Toronto. Becky (Moss) is a little older than she was when her band hit it big but is trying to mount a comeback in an industry that puts clear age limits on those it allows to succeed.

Finally, Teen Spirit stars Elle Fanning as a young girl who enters a singing competition in an attempt to achieve her dream of becoming a massive pop star. Written and directed by Max Minghella, the movie looks at how Violet (Fanning) adapts to and deals with everything that’s required of her on the road to success.

Both Hotel Mumbai and 22 July cover two different terrorist attacks from 2008 and 2011, respectively. 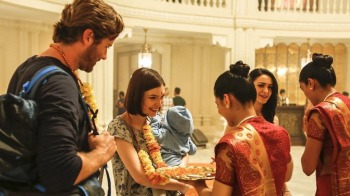 The first deals with an attack that happened in Mumbai spanning four days and encompassing a dozen different shootings and bombings. The Taj Mahal Hotel, the last location secured by authorities, is where the story focuses to tell the story of the guests and workers that banded together to survive the ordeal.

Paul Greengrass directed the second, which tells the story of what happened in the aftermath of the 2011 attacks in Norway, including how one of the perpetrators of an initial bombing escaped to a nearby youth camp and committed more violence.

Two things jump out to me: 1) It’s good that we’re finally getting some real stories of non-US attacks, showing that terrorism is not something that is unique to this country but a problem impacting the global population. 2) That the one not featuring white people – Hotel Mumbai – has sat in distribution limbo for almost two years and might still be there if Bleecker Street hadn’t picked it up just before Toronto.

As the US continues to deal with the economic, health and lifestyle impact of the ongoing opioid crisis, filmmakers and writers are clearly grappling with the topic of addiction in their own various ways. So Toronto featured movies including A Million Little Pieces, Beautiful Boy, White Boy Rick and Ben Is Back, all of which tackle drug addiction from their own angles.

Notably, two of them – Ben and Boy – specifically look at how addiction impacts the whole family of the addict, especially the parent. Both, based on the trailers and other materials that have been released so far, focus on that parent/child relationship as a window into the life of the child that’s struggling with a problem.

Did I miss anything?