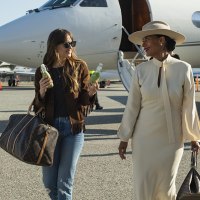 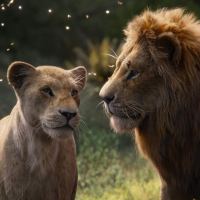 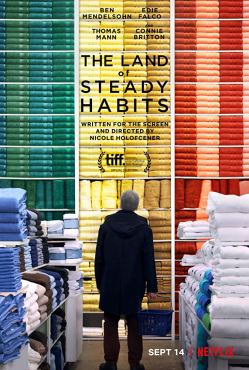 A mid-life crisis lies at the heart of the new movie The Land of Steady Habits. Ben Mendelsohn plays Anders Hill, a man who finds himself dissatisfied with the status quo of his life and so decides to quit his job in finance, divorce his wife Helene (Edie Falco) and creating a rift between him and his son Preston (Thomas Mann).

Unfortunately Anders finds the grass was not greener on the other side. Directionless and alone, he finds himself wandering stores in the hopes things will fill a void in his life, sleeping around and engaging in other reckless behavior. In the end he finds himself more at odds with himself and his pursuit of happiness than he was before.

Anders standing in front of a massive wall of multi-colored towels and bathmats is a great choice of visuals for the poster. It shows how he’s up against the overwhelming odds of everyday life and is just trying to make sense of it all.

The first trailer, which premiered on Vanity Fair, shows Anders to be a nice guy who’s kind of a jerk. A good dad with no patience for his kid. A divorced husband who can’t stop hanging around his ex and is super-awkward on the dating scene. A disillusioned finance professional with no idea what he could do that’s more meaningful. In other words…kind of an ordinary guy. The basic story is laid out here, showing all the situations Anders and Charlie find themselves in as they try and figure life out while everyone around them offers their own opinions and thoughts.

What comes through most clearly here is that we need to start giving Mendelsohn some better, more wide-ranging roles. He can’t *always* play the bad guy and is charming and breezy in the trailer, as is the rest of the impressive cast.

No website or other online presence for the movie, though it did receive some support on Netflix’s Twitter account and Facebook page, though not as much as some other more high-profile releases and some of the other movies it was promoting at Toronto.

The movie was announced as one of those screening at the Toronto International Film Festival. Just before that director Nicole Holofcener was interviewed along with the other four female directors with Netflix-original movies coming out in the last few months of 2018. Mendelsohn talked about the movie and how it fits into his career during Toronto while Holofcener shared why she wanted to make a thriller and the freedom given to her by Netflix.

Quite frankly, it’s just nice to see Mendelsohn not play some conniving, mustache-twirling villain in a science fiction movie. The trailer sells a movie that’s a little funny along with being somewhat sad. Anders never really looks like a sympathetic figure, which may turn some people off, but it also looks a bit more realistic and emotionally honest for that.

Costar Elizabeth Marvel gets profiled, with a focus on how her role in the movie fits into her career as a whole.

Star Ben Mendelsohn had an interesting way of preparing for shooting and bond with his costars. He also showed up on “Kimmel” to talk about the movie and tell some other interesting stories.

Another interview with director Nicole Holofcener where she talks about what inspired the story and what it was like adapting a story for the first time.